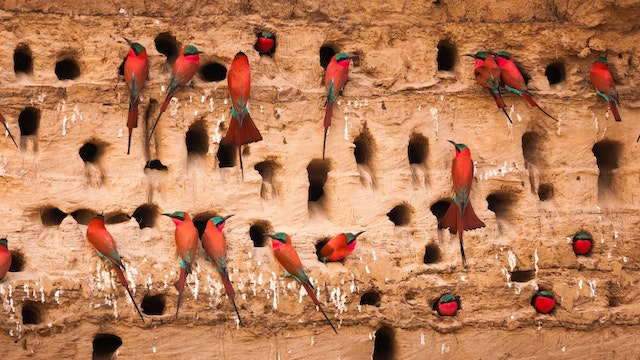 For scenery, variety and density of animals, South Luangwa is the best park in Zambia and one of the most majestic in Africa. Impalas, pukus, waterbucks, giraffes and buffaloes wander on the wide-open plains; leopards, of which there are many in the park, hunt in the dense woodlands; herds of elephants wade through the marshes; and hippos munch serenely on Nile cabbage in the Luangwa River. The bird life is also tremendous: about 400 species have been recorded.

The focal point is Mfuwe, an uninspiring though more prosperous than average village with shops as well as a petrol station and market. Around 1.8km further along is Mfuwe Gate, the main entrance to the park, where a bridge crosses the Luangwa River. Much of the park is inaccessible because of rains between November and April.

All lodges/camps run excellent day or night wildlife drives and some have walking safaris (June to November). These activities are included in the rates charged by the upmarket places, while the cheaper lodges/camps can organise things with little notice. A three-hour morning or evening wildlife drive normally costs around US$40, while a wildlife walk is about US$50.

The wide Luangwa River is the lifeblood of the park. It rises in the far northeast of Zambia, near the border with Malawi, and flows southward for 800km through the broad Luangwa Valley – an offshoot of the Great Rift Valley, which cuts through East and Southern Africa. It flows all year, and gets very shallow in the dry season (May to October) when vast midstream sandbanks are exposed – usually covered in groups of hippos or crocodiles basking in the sun. Steep exposed banks mean animals prefer to drink at the park’s numerous oxbow lagoons, formed as the river continually changes its course, and this is where wildlife viewing is often best, especially as the smaller water holes run dry.

The park is famous for its herds of buffaloes, which are particularly large and dramatic when they congregate in the dry season and march en masse to the river to drink. Elephant numbers are also very healthy, even though ivory poaching in the 1980s had a dramatic effect on the population. Elephants are not at all skittish as they are very used to human activity and wildlife vehicles, especially around Mfuwe. This park is also a great place to see lions and leopards (especially on night drives), plus local species including Cookson’s wildebeest (an unusual light-coloured subspecies) and the endemic Thornicroft’s giraffe, distinguished from other giraffes by a dark neck pattern.