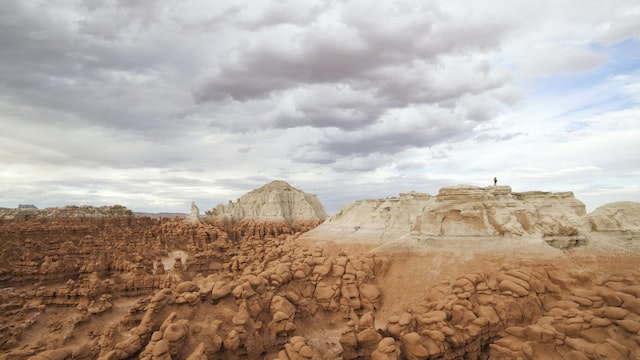 A Salvador Dalí–esque melted-rock fantasy, a valley of giant stone mushrooms, an otherworldly alien landscape or the results of a cosmological acid trip? No matter what you think the stadium-like valley of stunted hoodoos resembles, one thing’s for sure – the 3654-acre Goblin Valley State Park is just plain fun. A few trails lead from the overlooks down to the valley floor. You can climb down, around and even over the evocative ‘goblins’ (2ft to 20ft–tall formations). Kids and photographers especially love it.

Some of Utah's most famous canyoneering routes are found in the park. The San Rafael Swell and Robber's Roost are for experienced canyoneers and should otherwise only be attempted with a guide or group. Robber's Roost's Bluejohn Canyon has become one of the most famous canyoneering routes in the world. It gained infamy in 2003, when Aron Ralston spent 127 hours here pinned to a boulder before finally amputating his arm. His ordeal has been captured in books and the media, as well as in the 2010 James Franco movie 127 Hours. The biggest mistake he made: not telling anybody where he was going.

The park's 19-site campground books up on most weekends. West of the park off Goblin Valley Rd is BLM land, with good, free dispersed camping, but no services (stay on designated roads). North of the park entrance, an unpaved dirt road heads west to the Little Wild Horse and Bell Canyon loop trail, a moderate 8-mile hike through a series of lovely, narrow slot canyons.

Twenty miles south on Hwy 24 is Hanksville (population 219, elevation 4294ft); if you don't need gas, there's little reason to stop. It's better to stay in Green River, Torrey or at Lake Powell, depending on where you're headed. The BLM Field Office has maps and information for surrounding lands, particularly the Henry Mountains. Before continuing south, fill up your car and carry your own food and water. There are no more services until you get to Bullfrog Marina (70 miles) or Mexican Hat (130 miles).