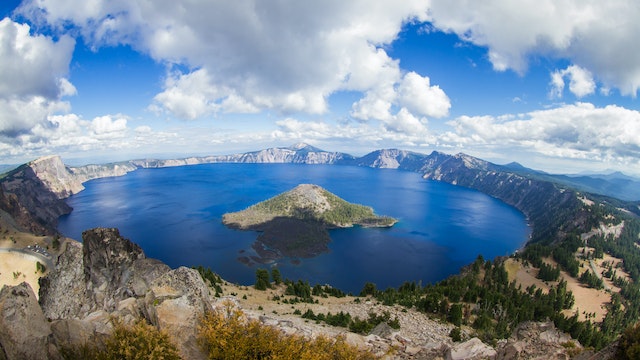 The ancient mountain whose remains now form Crater Lake was known to the the Klamath, Modoc and Yahooskin Band of the Snake as Giiwas, or "sacred place." It earned that name after the region's Indigenous people witnessed a catastrophic volcanic explosion around 7700 years ago, an even that knit itself into their oral histories in such detail that Klamath mythology predicted geological discoveries that weren't made until millennia later.

It may be hard to picture now, but Mount Mazama was a roughly 12,000ft volcanic peak that was heavily glaciered and inactive for many thousands of years until it came back to life. When the top of the mountain blew, it scattered ash for hundreds of miles as flows of superheated pumice solidified into massive banks. These eruptions emptied the magma chambers at the heart of the volcano, and the summit cone collapsed to form the caldera. Sparse forests can still be seen growing in pumice and ash in the Pumice Desert, just north of Crater Lake along North Entrance Rd. Further afield, outside the park, beloved attractions like Umpqua Hot Springs hint at the region's ongoing geologic activity.

Slowly over time, snowfall and rain contributed to the lake water – and the purity of the sources combined with the lake's great depth (at 1943ft down, it's the deepest lake in the United States) give it that famous hue. Those gloriously blue waters of Crater Lake reflect surrounding mountain peaks like a giant dark-blue mirror, making for spectacular photographs and breathtaking panoramas.

The park's popular south entrance is open year-round and provides access to Rim Village and Mazama Village, as well as the park headquarters at the Steel Visitors Center. In winter you can only go up to the lake's rim and back down the same way; no other roads are plowed. The north entrance is only open from early June to late October, depending on snowfall.

No matter what else they get into, most visitors cruise the 33-mile loop Rim Drive, which is open from around June to mid-October and offers over 30 viewpoints as it winds around the edge of Crater Lake. A 7-mile side road leads to the Pinnacles, pumice and ash formations carved by erosion into 100ft spires ('hoodoos'). A paved side road on the east side leads to amazing views from Cloudcap Overlook, almost 2000ft above the lake. Without any stops, it takes about an hour to do this drive (but you'll want to stop!).

Whether you're just gazing at Wizard Island from the rim of Crater Lake, or visiting it by boat, it's definitely one of the most prominent features of this national park. The island is actually the top of a cinder cone and rises about 755ft above the surface of the lake. On the island you can hang out and swim or hike up to the top of the cone and circle the rim (2.5 miles round-trip). The Fumarole Trail (1.4 miles roundtrip) leads around the coast along cool lava formations. You'll have to reserve in advance to get a boat shuttle here, only available in summer.

One of the most popular things to do at Crater Lake is to take the informative, ranger-led, two-hour-long Crater Lake Trolley tours. The old-fashioned, wood-paneled vehicle makes five to seven stops and saves you from having to drive and park, plus you get very insightful narration along the way.

Two-hour boat tours are also available and require a fairly strenuous 30- to 40-minute hike down the crater to the dock (then back up again). The two-hour tour ($44 per person) takes you around the lake, or include Wizard Island ($55 per person) for a chance to swim and hike. You can also just take a shuttle to Wizard Island ($28 round-trip). Reserve, as these are popular.

Crater Lake has over 90 miles of hiking trails, although some higher ones aren't completely clear of snow enough to hike until late July. The trails closer to Crater Lake Lodge and Mazama Village are the busiest but with a little determination and sweat you can lose the crowd to find some spectacular trails and mind-bending views. Wildflowers bloom through the hiking season and the higher the elevation, the later the blooms.

In winter, only the southern entrance road to Rim Village is kept plowed to provide access to several Nordic skiing trails. Rentals are unavailable inside the park, so bring skis with you. Only experienced skiers should attempt the dangerous, avalanche-prone loop around Crater Lake, which takes two to three days and requires a backcountry permit from park headquarters. Snowshoes are provided for free ranger-led snowshoe walks in winter. Call ahead for reservations.

This strenuous 5 mile round trip hike takes you to an incredible lake vista atop 8929ft Mt Scott, the highest point in Crate Lake National Park. It starts easily, through a meadow then climbs more steeply the higher (and more out of breath) you get. Because of the high elevation you can expect snow around the top of the trail year-round. It's said that this is the only place in the park where you can get the entire lake in a camera frame. This is also a great place to spot Grouse, Clark's Nut Crackers, Steller's Jays and other birds.

From the eastern edge of the Rim Village parking lot, this short but steep 3.4 mile trail leads up 8054ft Garfield Peak to an expansive view of the lake, the Klamath Basin and southern Cascade mountains; in July the slopes are covered with wildflowers. This is one of the most popular hiking trails in Crater Lake but even with the crowds, it's worth it. Expect snow at the upper elevations all season long. Be prepared to get winded by the altitude if you're not acclimatized.

For a steep but shorter 1.4 mile hike, trek up to the Watchman, an old 1932 lookout tower on the opposite side of the lake that boasts one of the park's best views – and definitely the best views of Wizard Island. Wear good shoes to traverse a scree area. Expect a colorful palette of wildflowers from late August into October and snow year-round. It can get windy up here so dress in layers.

For flower enthusiasts, there's an easy 1-mile nature trail near the Steel Visitors Center that winds through the Castle Crest Wildflower Garden. This trail built in 1929 was one of the first interpretive wildflower trails built in a national park. The path meanders though meadow lined with forest and is dotted with wet meadows with stepping stones and little streams. Surprisingly, it's lightly visited so it's a great place to find some peace and quiet. Do expect mosquitoes. The most flowers bloom early in the season around June.

The very popular and steep 2 mile trail at the northern end of the crater provides the only water access at the cove. Bring a swimsuit to take a dip in the lake (this will be with a whole bunch of other people) and waterproof shoes since the bottom here is sharp rock. Geology nerds will also love the chance to see the volcanic rock that makes up the caldera. Boat tours are available from here but reserve in advance. If the parking lot is full, park along the road (although even that might be full).

This short 1.2 mile trail is actually outside the park and gives you a glimpse of some different geology. Follow Pinnacles Rd (off of East Rim Dr) and keep going down Pinnacles Rd (about another 6 miles) until you reach Pinnacles Overlook. The colorful spires you look down on are around 100ft high. The spires are fumaroles, where volcanic gas rose up through hot ash deposits, cementing the ash into solid rock. As a side trip, you can also stop and take the Plaikni Falls Trail to Plaikni Falls (off of Pinnacles Rd) before you reach the Pinnacles Overlook Trailhead.

Construction began on the grand old Crater Lake Lodge in 1909 and it opened in 1915, but it's been steadily evolving ever since, with regular updates and renovations that haven't diminished it as a stunning example of the classic "parksitecture" style that first welcomed tourists to the country's earliest National Parks. Still, the intense winter weather conditions on the mountain took their toll, and the Lodge was almost razed in the 1970s until the local community rallied to have it added to the National Register of Historic Places.

An extensive retrofitting in the early 1990s saved the Lodge, and today it boasts 71 simple but comfortable rooms – don't expect TV or a telephone. It's the common areas that are most impressive – large stone fireplaces, a fine dining room, rustic leather sofas and a spectacular view of Crater Lake from the patio are what make this place really special. Park lodging is closed mid-October to late May, depending on snowfall.

Cabins and camping in Mazama Village are another option for lodging. Open approximately mid-June through September or October (depending on the weather), this is the park's main campground. The 40 pleasant cabin rooms (no TV or telephone) are located in attractive four-plex buildings. Mazama Village is 7 miles from Crater Lake, with a small grocery store and gas pump nearby. There are over 200 wooded camp sites, too, with showers and a laundry; Some sites are first come, first served. Whether you're pitching a tent or posting up in a cabin, it's wise to reserve as early as possible.

Other than Crater Lake Lodge and Mazama Village, the nearest non-camping accommodations are 20 to 40 miles away. Fort Klamath has several good lodgings. Union Creek, Prospect, Diamond Lake and Lemolo Lake all have nice, woodsy places to stay. In particular, the lodge at Diamond Lake is a classic 1920s alpine lake retreat that's a little worn around the edges but still hints at century-old glam. There's lots of accommodations in Medford, Roseburg and Klamath Falls, too.

Most people visit Crater Lake by car; it's wise to carry chains in winter. The north entrance and most of the roads inside the park are closed from November usually until June. Hwy 62 and the 4-mile road from the highway to park headquarters are plowed and open year-round.

The 3-mile road from headquarters to Rim Village is kept open when possible, but heavy snowfall means it may be closed; call ahead to check (541-594-3100). It's best to top up your gas tank before arriving at Crater Lake. There's reasonably priced gas at Mazama Village (summertime only); the closest pumps otherwise are in Prospect, Diamond Lake and Fort Klamath.

Amtrak trains link up with the Crater Lake Trolley once daily in summer so you can make it up to the lake and back in a day. However, you'll have to spend the night in Klamath Falls one night either on the way in or out (depending on which direction you're headed).

The Steel Visitors Center three miles south of Rim Village provides good information, with a film about the park, backcountry permits and weather info. Rangers are available to answer questions. Remember that you're at high elevation and pack accordingly, bringing lots of water, sun protection and convertible clothing for the fickle weather. Summer is often cold and windy, so dress warmly.

The park's eating facilities are limited, though you can always bring a picnic and find a fabulously scenic spot. Rim Village has a small cafe and there's an upscale dining room nearby at the lodge where you can feast on Northwestern cuisine from a changing menu that includes dishes like bison meatloaf and elk chops with huckleberry sauce. Try for a table with a lake view (there are only a few). Dinner reservations are recommended. Mazama Village has a small grocery store and a decently priced restaurant called Annie Creek, too.