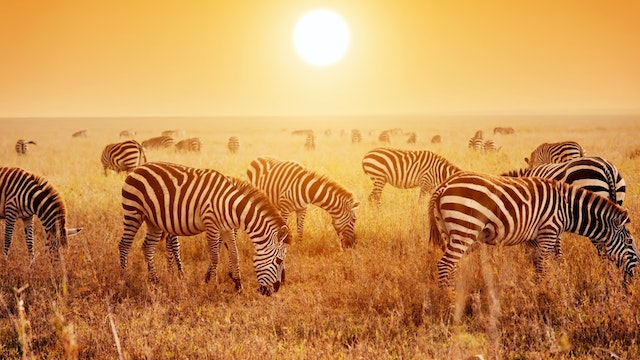 Few people forget their first encounter with the Serengeti. Perhaps it's the view from the summit of Naabi Hill at the park's entrance, from where the Serengeti's grasslands stretch out like a vision of eternity. Or maybe it's a coalition of male lions stalking across open plains. Or it could be the epic migration of animals in their millions, following the ancient rhythm of Africa's seasons. Whatever it is, welcome to one of the greatest wildlife-watching destinations on earth.

On the vast plains of the Serengeti, nature’s mystery, power and beauty surround you as they do in few other places. It’s here that one of earth’s most impressive natural cycles has played itself out for aeons as hundreds of thousands of hoofed animals, driven by primeval rhythms of survival, move constantly in search of fresh grasslands. The most famous, and numerous, are the wildebeest (of which there are some 1.5 million) and their annual migration is one of the Serengeti’s biggest draws. Besides the migrating wildebeest, there are also resident populations in the park and you’ll see these smaller but still impressive herds year-round. In February more than 8000 wildebeest calves are born per day, although about 40% of these die before reaching four months old. A few black rhinos in the Moru Kopjes area give you a chance to glimpse all of the Big Five (lion, elephant, rhino, leopard and buffalo), although the rhinos are very rarely seen.

The 14,763-sq-km national park is also renowned for its predators, especially its lions. Hunting alongside them are cheetahs, leopards, hyenas, jackals and more. These feast on zebras, giraffes, buffaloes, Thomson’s and Grant’s gazelles, topis, elands, hartebeests, impalas, klipspringers, duikers and so many more. Serengeti is an incredible birdwatching destination also, with over 500 species.

Entry fees are valid for 24 hours, with a single entry only.