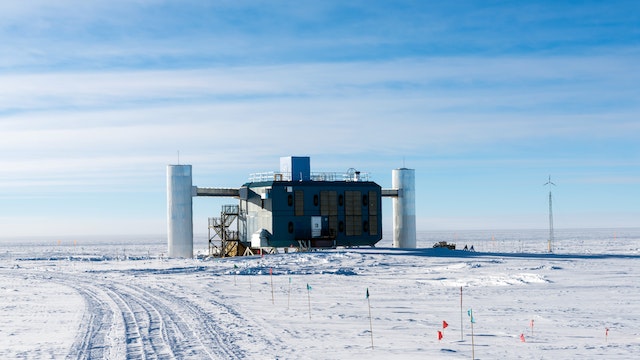 Most of the scientific facilities at the Pole are off-limits to visitors, to avoid disrupting research. Other laboratories are off-limits because their instrumentation could be contaminated or decalibrated by unauthorized visitors. Nevertheless, it’s interesting to learn about the cutting-edge science being done at the Pole.

Among the most important research is work on the notorious ‘ozone hole,’ the thinning of the atmosphere’s ozone layer. Scientists at the Atmospheric Research Observatory (ARO), upwind of the station in the Clean Air Sector, study some of the purest air on Earth in the hope of learning about pollution and how it spreads around the globe. Another group in this observatory is using Lidar (light radar) to study the formation of polar stratospheric clouds, which act as the seeds for the depletion of ozone each spring.

The South Pole is a world center for astronomy, thanks to its high altitude and thin, dry atmosphere. The centrifugal force of the Earth’s rotation flattens out the atmosphere at both poles, and the extreme cold freezes water vapor out of the air. The astronomical instruments are located about 1km from the station in the ‘Dark Sector’, where extraneous light, heat and electromagnetic radiation are prohibited, so as not to disturb the experiments. An 8m South Pole Telescope (SPT), built at a cost of US$19 million, part of the Dark Sector Laboratory, achieved the milestone called ‘first light’ (when light passes through all parts of a telescope and it becomes operational) in 2007. The SPT seeks cosmic microwave background radiation to investigate the ‘dark energy’ that appears to be accelerating the expansion of the universe. The telescope also searches for the signature of primordial gravitational waves and tests models for the origin of the universe.

Another part of the Dark Sector Lab is Background Imaging of Cosmic Extragalactic Polarization (BICEP), an experiment designed to measure the polarization of the cosmic microwave background with unprecedented precision, helping to answer questions about the origin of the universe.

Also in the Dark Sector is the Martin A Pomerantz Observatory (MAPO), a two-story elevated structure named for a pioneering US Antarctic astrophysicist. MAPO has supported various telescopes and detectors, including the South Pole Upgrade DASI (SPUD), which studies the polarization of the cosmic gravitational-wave background.

The amazing IceCube (www.icecube.wisc.edu) is a US$271-million, kilometer-sized neutrino observatory submerged beneath the ice. From 2005 to 2010, 86 holes were drilled 2450m deep into the ice with a hot-water drill. Then strings of 60 volleyball-sized instruments called digital optical modules (DOMs) were lowered down. This enormous underground array of about 5484 DOMs looks for ultrahigh-energy subatomic particles called neutrinos. The team searches for neutrinos that have passed through the core of the Earth (which they can do); thus the Earth becomes a telescope and the ice cap the detector. The neutrinos interact with atoms in the ice – which is perfectly transparent and super dark at that depth – creating blue flashes of light detected by the DOMs. Studying neutrinos in this way may increase our understanding of ‘dark matter,' the power sources of galaxies, cosmic-ray acceleration and the workings of supernovae (the massive explosions of stars), as well as the ability of neutrinos to change type. More than 36 institutions and 250 scientists worldwide use this data.

Noise and other earth-shaking activities are banned in the Quiet Sector, where seismology is studied at the South Pole Remote Earth Sciences Seismological Observatory (SPRESSO), located 7.5km from the station, and operational since 2003. Instruments placed 300m beneath the surface detect earthquakes (and underground nuclear explosions) worldwide. Antarctica is so seismically ‘quiet’ and the seismometers so sensitive that vibrations up to four times quieter than any previously observed can be picked up. SPRESSO staff could easily detect when certain tractors used by Pole construction crews were left idling or shut down.