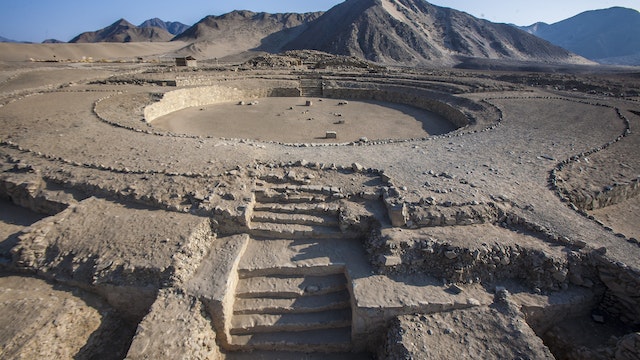 Before metal or ceramic was invented and well before the Maya and Inca cultures ruled, there was Caral, the oldest civilization in the Americas. Having dominated Peru’s coast from 3000-1800 BCE, Caral (also referred to as Norte Chico) would leave behind a massive complex, less than 130 miles from Peru’s modern-day capital, Lima. Constructed when the first pyramids of Egypt were taking shape, the ancient urban center spans over 150 acres of dry desert, overlooking the verdant Supe valley. The Caral archaeological site is impressively well-preserved (perhaps because it was rediscovered less than a century ago) and visitors will note its complex architectural designs and advanced city planning in longstanding earthen and stone structures such as sunken circular plazas, a 28m-high temple, residential and elite dwellings, and ditches to channel water.

Caral was the blueprint of Andean civilization and yet the Unesco World Heritage Site receives just a trickle of tourism. Slightly isolated and historically crucial, embrace the absence of crowds when going off the typical tourist route and visiting Caral.

Buried under desert sand dunes until rediscovered by American archaeologist Paul Kosok in 1948 and extensively studied by Peruvian archaeologist and anthropologist Ruth Shady since the 1990s, Caral is believed to have developed 5000 years ago. The site is one of the largest in the Americas and its creators, the Caral, one of the most important cultures in the world.

The Caral civilization (also referred to as Caral-Supe or Norte Chico) thrived on agriculture and fishing, as they were dwellers of Peru’s northern coast. They established themselves in today’s Barranca region around 3000 BCE with small, dispersed settlements that would interact through trade. Evidence-based findings support the idea that Norte Chico members also traded products, resources and knowledge with distant communities based in the jungle and highlands of Peru. The diverse relationships and gained perspectives no doubt contributed to this ancient society’s advanced scientific and technological know-how.

The Caral complex was likely built around 2700 BCE and, perhaps for the first time in the Americas, managed to unite settlements in a sacred urban center. Much mystery remains about the civilization but it is believed that at its height Caral was home to an estimated 3000 residents. Details in the architecture, such as stairways that align with stars and altars with fire pits, point to religious and ceremonial occurrences.

The absence of a walled closure is the first sign of this society’s peacekeeping trait and in fact archaeologists have yet to find any evidence of warfare in their diggings. Instead, musical instruments made of animal bones and a knotted textile apparatus used for accounting called quipu, popularly associated with the much later Inca culture, have been found in the grounds of Caral.

Experts like Shady point to extreme climate change as the cause of Caral’s collapse. Prolonged drought dried up the Supe river and turned what was once a lush valley into the arid dunes that greet visitors today. Archaeologists have found evidence of various other extreme natural phenomena that would have scared Caral locals away (such as earthquakes and floods), leaving Caral abandoned around 1800 BCE.

And while Caral is certainly the best preserved and studied example of this pioneering civilization, remnants of 18 neighboring ancient cities have been discovered by archaeologists in the past few decades. In other words, there is much to be discovered about the cradle of Andean civilization and Caral just so happens to be the gateway.

How to get to Caral

Located north of Lima, about 115 miles along the PanAmerican Highway, Caral can be reached by bus or private car. A four-hour drive, it is doable as a full-day excursion from the capital city; however, travelers should embark on the trip as early as possible in order to enjoy their time at the archaeological site.

In a private car, head north along the Panamericana Norte highway until reaching the district of Supe (Barranco) at kilometer 187. From there, drivers are guided by signs to take an exit to the right in order to reach the archaeological site.

Considering that renting a car in Peru is extremely expensive and the driving culture unsafe for the unaccustomed, the best option is to visit Caral by bus.

Bus companies such as MovilBus and Turismo Barranco operate daily and leave Lima as early as 5:30am and offer return shuttles from Supe until 5:15pm. Round trip tickets are about S/50, depending on the company. The buses only go as far as Supe however, which means travelers need to then take a taxi or colectivo (shared taxi) from the bus stop to the Caral site. From Supe’s main square, walk a few blocks towards the district market and ask for “colectivos a Caral.” A colectivo is by far the more budget-friendly option as it will likely cost less than S/10 for the 40-minute ride, while a taxi can charge up to S/50.

Tip: Ask the colectivo or taxi driver to wait for you as you tour Caral, since hailing a taxi in the middle of the desert is not easily done.

Caral can be visited Monday to Saturday, from 10am-4pm.

General entrance to Caral costs S/11 for adults, S/1 for children under 12 years, and S/5.50 for seniors (60 years and over). Tickets must be paid in cash (Peruvian sol) at the on-site ticket booth. Though signs in English are available throughout the site, local guides are available for hire on-site for S/20 to ensure a deeper experience.

The site can be accessed by wheelchair although the paths are rocky so caution is advised.

Though there are on-site shops, often the only thing open is the ticket booth. Pack a sun hat, sunscreen and plenty of water as you’ll be navigating this open desert site for 2-3 hours by foot.

Just back from: the Northern Highlands of Peru
Suggest an Edit