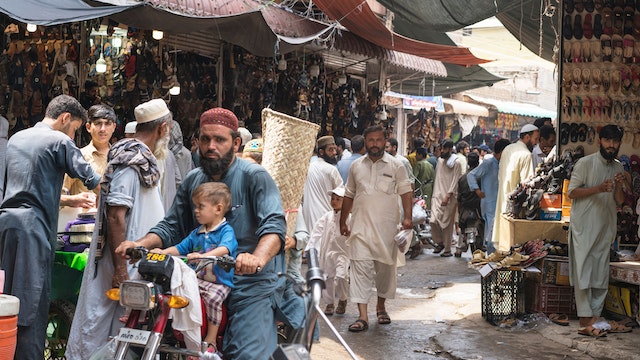 On the fringes of Peshawar as you head towards the Khyber Pass is the Smugglers' Bazaar (Karkhanai Bazaar). It thrives openly on the sale of goods imported through Pakistan for Afghanistan, then smuggled back through the Tribal Areas to avoid paying duty. Everything is available here from cut-price electronics to clothes and stationery. It's an enormous trade that costs Pakistan millions of dollars annually in lost revenue - enough money to generate the bribes that allow the market to flourish.

Foreigners are banned from entering the far end of the bazaar where guns and drugs are openly on sale - a barrier prevents accidental entry.

The Smugglers' Bazaar and Darra Adam Khel have long been part of the Peshawar tourist experience, and feature on most local guides' itineraries. After all, what other holiday destination offers the chance to see blocks of opium and fire a Kalashnikov? But while guns have long been a part of Pashtun culture (drugs too, although to a much lesser extent), if you're planning a visit it's worth spending a moment considering where the backhanders your guide pays to the dealers are going.

There's plenty of cannabis on offer in the bazaar, but the big money comes from opiates. The heroin sold in Peshawar comes from Afghanistan, part of the trade that threatens the Afghan state through institutional narco-corruption as well as funding the Taliban insurgency. The trade provides 90% of Europe's heroin, although the Smugglers' Bazaar mainly serves Pakistan's rapidly growing population of heroin addicts. When we visited, one shopkeeper showed us bags of heroin while ignoring the addicts squalidly smoking the drug on the carpets behind him. As we left we pictured Pakistani tourists paying dealers to show them around the crack houses of London or New York and wondered how different that would be.

The drug-funded insurgency is also bringing boom times for the gun shops. One dealer was thrilled that the price of AK47s was going through the roof due in large part, he told us, by radicals wanting to 'do jihad' in Afghanistan and Waziristan. Tourism doesn't come much darker than in Pakistan's Tribal Areas. An official crackdown on the trade saw this part of the bazaar bulldozed in early 2007, but it was quickly rebuilt - with the police officer leading the raid murdered a fortnight later.

It's a 20-minute ride from Saddar on one of the colourful city buses; ask for 'Karkhanai'. Don't come here when it's getting dark.