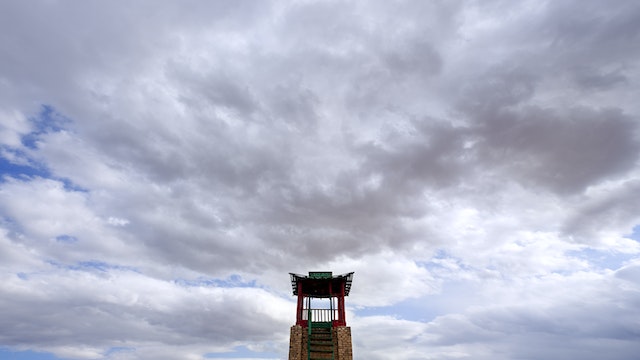 The bend in the river here marks the remains of two ruined monasteries which are today considered one vast complex known as Ongiin Khiid. Bari Lam Khiid was built in 1810 on the north bank, the same side of the river as the area's tourist ger camps. Khutagt Lam Khiid was built in 1760 on the south. It was formerly one of the largest monasteries in Mongolia, and home to over a thousand monks.

In the monasteries' heyday there were 17 temples on the northern side of the river and 11 on its southern bank, along with four Buddhist universities. Ongiin Khiid was a place of devotion and scholarship until the complex was destroyed in the 1937 communist purges when over 200 lamas were murdered. Others suffered forced conscription into the communist army and still others ran away to become herders and hopefully live in peace.

After the temple was destroyed the river was soon rerouted to support local mines run by the communist government, and when the river dried up local herders were forced out of the area in search of water. Happily, once the Cold War ended in 1990 a small but growing contingent of monks arrived to set up shop amid the ruins, completing a small temple in 2004 and incorporating some original beams from the old ruined monastery in the new structure. A few monks live here full time, and every morning, before an altar flickering with candles and graced with a framed photo of the Dalai Lama, they worship and chant. Services begin at roughly 9am and last until about noon. You are welcome to join them. In summer their numbers swell.

The ger beside the temple houses a small but interesting museum showcasing some artefacts found at the site, many of which were hidden by monks to save them from the purges. Views of the monochromatic mudbrick ruins and the surrounding area are impressive from the ibex monument at the top of the complex, where you can find broken original roof tiles.