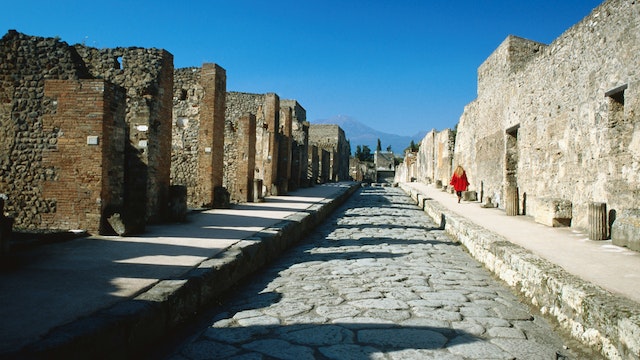 The ghostly ruins of ancient Pompeii (Pompei in Italian) make for one of the world's most engrossing archaeological experiences. Much of the site's value lies in the fact that the town wasn't simply blown away by Vesuvius in AD 79 but buried under a layer of lapilli (burning fragments of pumice stone). The result is a remarkably well-preserved slice of ancient life, where visitors can walk down Roman streets and snoop around millennia-old houses, temples, shops, cafes, amphitheatres and even a brothel.

The origins of Pompeii are uncertain, but it seems likely that it was founded in the 7th century BC by the Campanian Oscans. Over the next seven centuries, the city fell to the Greeks and the Samnites before becoming a Roman colony in 80 BC.

In AD 62, a mere 17 years before Vesuvius erupted, the city was struck by a major earthquake. Damage was widespread and much of the city's 20,000-strong population was evacuated. Fortunately, many had not returned by the time Vesuvius blew, but 2000 men, women and children perished nevertheless.

After its catastrophic demise, Pompeii receded from the public eye until 1594, when the architect Domenico Fontana stumbled across the ruins while digging a canal. Exploration proper, however, didn't begin until 1748. Of Pompeii's original 66 hectares, 44 have now been excavated. Of course that doesn't mean you'll have unhindered access to every inch of the Unesco-listed site – expect to come across areas cordoned off for no apparent reason, a noticeable lack of clear signs, and the odd stray dog. Audio guides are a sensible investment (€8) and a good guidebook will also help – try Pompeii, published by Electa Napoli.