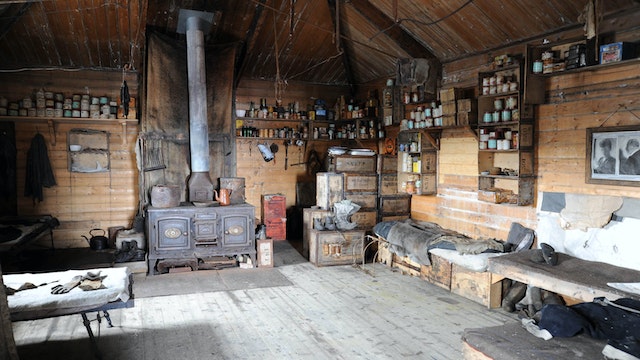 Shackleton erected this structure on his Nimrod expedition in February 1908. Fifteen men lived in the hut, which is much smaller than Scott’s at Cape Evans, and the feeling inside is still very atmospheric. All of Shackleton’s men left here alive (unlike at Scott’s hut), and apparently they left in a hurry: when members of the Terra Nova expedition visited in 1911, they found socks left hanging to dry and a meal still on the table.

Members of the Ross Sea party of Shackleton’s 1914–17 Endurance expedition also stopped by, commandeering tobacco and soap, among other treats.

Since these long-ago stopovers (snow filled it during one long interval between visits), the hut has undergone an extensive AHT conservation project (from 2004 to 2008). The weatherproofed result completely retains the hut’s historical appeal.

If you’re tall, duck as you step inside so you don’t hit your head on the acetylene generator over the entryway. It once powered the hut’s lamps.

Unlike Scott, Shackleton imposed no division between officers and men at Cape Royds, although as ‘The Boss’ he did invoke executive privilege to give himself a private room near the hut’s front door. Ask your AHT guide to point out Shackleton’s signature (which may or may not be authentic) in his tiny bunk room. It’s upside down on a packing crate marked ‘Not for Voyage,’ which he had made into a headboard for his bunk.

A freeze-dried buckwheat pancake still lies in a cast-iron skillet on top of the large stove at the back of the hut, beside a tea kettle and a cooking pot. Colored-glass medicine bottles line several shelves. One of the few surviving bunks, to the left toward the back, has its fur sleeping bag laid out on top. Many tins of food with unappetizing names, such as Irish brawn (head cheese), boiled mutton, Army Rations, Aberdeen marrow fat, lunch tongue and pea powder, lie on the floor (near the walls), along with still-bright-red tins of Price’s Motor Lubricant. A bench piled with mitts and shoes stands on the right. The dining table, which was lifted from the floor every night to create extra space, is gone. It may have been burned by a later party that ran out of fuel.

In January 2010, in a sensational find, conservators unearthed three crates of Shackleton’s Mackinlay’s whiskey and two crates of brandy from under the hut. After they had been thawed in Christchurch, in 2011 the master blender at Whyte & Mackay (owners of the Mackinlay’s brand) in Scotland analyzed and replicated the expedition’s whiskey precisely!

Outside the hut lie the remnants of the pony stables and the garage built for the Arrol-Johnson motorcar (Antarctica’s first car). Shackleton had brought Siberian ponies, unfortunately unsuited to Antarctic labor: they managed to pull loads a considerable distance but did not have the stamina or versatility of dogs. Pony oats spill from feed bags onto the ground. One of the car’s wheels leans up against a line of provision boxes, its wooden spokes scoured by the wind. Two wooden doghouses sit nearby.

On the hut’s south side, the wood has weathered to a handsome bleached grey. Boxes of rusting food tins stand against the side and back. Although rust has completely destroyed the labels, one wooden carton is literally spilling its beans.

Cables running over the hut lash it to the ground, and the AHT put on a new roof in the summer of 2005–06. The front door is also a replica, made of the same Scots pine timber as the original.

Cape Royds is home to the least visited of the Ross Island historic huts (about 700 people yearly). For conservation reasons, only eight people are permitted inside at one time, and only 40 are allowed ashore at once.