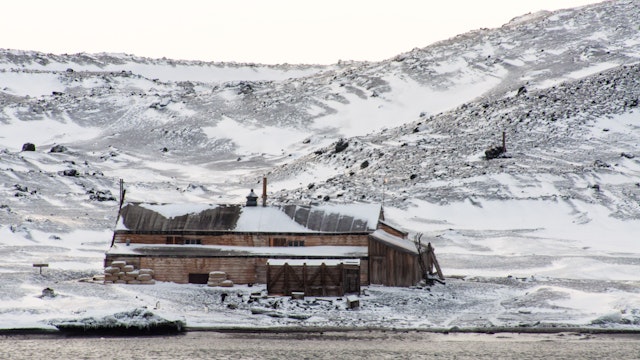 Scott’s hut from the Terra Nova expedition is steeped in an incredible feeling of history. Here, dog skeletons bleach on the sand in the Antarctic sun, evoking thoughts of Scott’s death march from the Pole. Stand at the head of the wardroom table and recall the famous photo of Scott’s final birthday, with his men gathered around a huge meal and their banners hanging behind.

Erected in January 1911, the prefabricated hut sits on what Scott called Home Beach. It stands close to the shore of McMurdo Sound and measures 14.6m long by 7.3m wide. The largest of the three historic huts on Ross Island, it accommodated 25 men in fairly crowded conditions. A long, narrow building stands in front of the hut; it held the latrines, with segregated facilities for officers.

After Scott’s last expedition, 10 members of the Ross Sea party of Shackleton’s Endurance expedition were stranded here in May 1915 when their ship Aurora was blown from its moorings. Their arduous task was to lay depots for the party crossing the continent from the Weddell Sea side to use on the second half of their journey. Because Endurance was crushed, the depots were never used. The men here passed a very difficult 20 months before Aurora’s crew was able to bring the ship back.

To enter the hut you pass through an outer porch area. To the left are the stables on the hut’s beachfront side. Still in the porch today are a box of penguin eggs, piles of seal blubber, shovels and implements hanging on the walls, and geologist Griffith Taylor’s bicycle.

Inside the hut proper, which was insulated by seaweed sewn into jute bags, you’ll be standing in what the expedition called the mess deck. In keeping with Royal Navy practice, Scott segregated expedition members into officers and men. The mess deck housed the men: Crean, Keohane, Ford, Omelchenko, Gerov, Clissold, Lashly, Edgar Evans and Hooper. To the right lies the galley, with a large stove.

Continuing further into the hut, past what was once a dividing wall made out of packing cases, you’ll come to the wardroom. Straight in the back is the darkroom and Ponting’s bunk. To the right is the laboratory, along with Wright’s and Simpson’s bunks. To the left of the wardroom table from front to back of their alcove were: Bowers (top bunk) and Cherry-Garrard (bottom bunk); Oates (top bunk, with only floor space beneath); and Mears (top bunk) and Atkinson (bottom bunk). To the right of the wardroom table were (front to back): Gran (top bunk) and Taylor (bottom bunk); a small geology lab; Debenham (top bunk, with nothing beneath); and Nelson (top bunk) and Day (bottom bunk). A note about Day’s bunk: Dick Richards used it during Shackleton’s Ross Sea party’s occupation. Look for the depressing notation he made on his bunk wall after three of the party’s members had died:

The back left corner of the hut is the sanctum sanctorum. Scott’s bunk, to the left, is separated from the bunks of Wilson and Edward Evans by a work table covered with an open book and a fading stuffed emperor penguin.

Throughout the hut are provisions and photographic supplies. There’s a strong, not unpleasant musty smell, like that of dusty old books and pony straw. Boxes hold candles that could still be used today. The name brands on many of the supplies remain familiar, with label designs that are hardly changed even now. Be sure to look for the telephone, which connected this hut with the Discovery hut using bare wire laid across the sea ice.

The site underwent an extensive AHT restoration project from 2008 to 2015. Between 700 and 800 visitors land at Cape Evans yearly, making it the most frequently visited Ross Sea tourist site. Only 12 people are permitted inside the hut at one time, and only 40 people are allowed ashore at once.