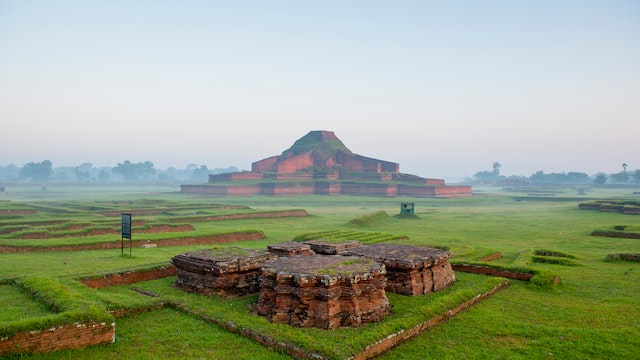 The hulking 20m-high remains of a 1300-year-old red-brick stupa form the central attraction of the vast monastery complex at Somapuri Vihara. Shaped like a quadrangle covering 11 hectares, the complex has monastic cells that line its outer walls and enclose an enormous open-air courtyard with the stupa at its centre. The stupa’s floor plan is cruciform, topped by a three-tier superstructure. Look out for clay tiles lining its base, which depict various people and creatures in a variety of postures.

Apart from the walls of the central stupa (now undergoing careful restoration), pretty much every other structure within the complex has been reduced to its plinths and base walls over time. Lining the outer perimeter are 177 small monastic cells – once living quarters for monks, and later used as meditation rooms. Ninety-two of these house ornamental pedestals, the purpose of which still eludes archaeologists. It is possible they contained the remains of saintly monks who had once resided here.

On the eastern wing of the south side is an elevated brick base with an eight-pointed star-shaped structure that is thought to have been a shrine. To the west lie the remains of what appears to have been the refectory and kitchen of the complex.

Except for the guardhouse to the north, most of the remains outside the courtyard lie to the south. They include an oblong building, linked to the monastery by a causeway, which may have been the wash house and latrines. In the same area is a bathing ghat, probably of Hindu origin. Close to the ghat is the rectangular ruin of a Hindu temple, with an octagonal pillar base in the centre and a circular platform to the front.

The monastery is thought to have been successively occupied by Buddhists, Jains and Hindus, which explains the curious mixture of artwork. The Jains would have constructed a chaturmukhar (a structure with all four walls decorated with stone bas-reliefs of deities). The Hindus replaced Buddhist terracotta artwork with sculptural stonework of their own deities, and terracotta artwork representing themes from the Mahabharata and the Ramayana. Artefacts discovered at the site range from bronze statues and bas-reliefs of the elephant-headed Hindu god Ganesh, to statues of the Jain god Manzuri, bronze images of the Buddha and statues of the infant Krishna.