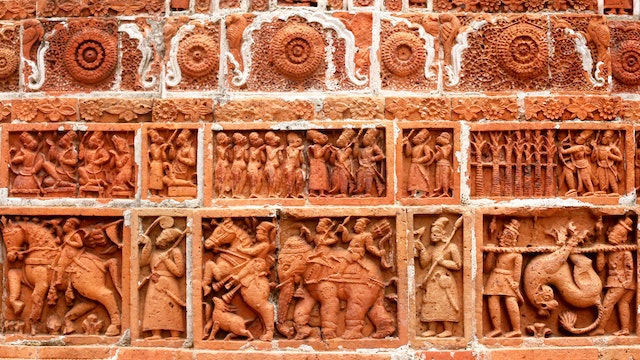 Set amidst gorgeous countryside, the vault-roofed rouge sandcastle of Kantanagar Temple, also known locally as Kantaji, is a stunning piece of religious artwork, and one of the most impressive Hindu monuments in Bangladesh.

Built in 1752 by Pran Nath, a renowned maharaja from Dinajpur, it is the country’s finest example of brick and terracotta style temple architecture. Its most remarkable feature, typical of mid-18th-century Hindu temples, is its superb surface decoration, with infinite panels of sculpted terracotta plaques depicting both figurative and floral motifs.

The folk artists who lent their masterful touches to the temple were superb storytellers. In one panel, a demon is depicted swallowing monkeys, which promptly reappear from his ear. Other scenes are more domestic, such as a wife massaging her husband’s legs and a lady combing lice from another woman's hair. Amorous scenes are often placed in obscure corners. These intricate, harmonious scenes are like a richly embroidered patchwork of Bangladeshi society, culture and mythology.

The 15-sq-m, three-storey edifice was originally crowned with nine ornamental two-storey towers, which collapsed during the great earthquake of 1897 and were never replaced. The building sits in a courtyard surrounded by offices and pilgrims’ quarters, all protected by a stout wall. Visitors can no longer go inside the inner sanctum of the temple, which houses a Krishna shrine, but the intricate detail of its exterior will keep you engaged.

The centuries-old Hindu festival of Maha Raas Leela – which celebrates the life of a young Lord Krishna – takes place here around full moon in late November or early December, attracting up to 200,000 pilgrims. This is also when a rural fair takes place around the temple complex, marked by stalls selling objects of daily village life and folk artists engaging in music and dance performances.

Buses run regularly all day from Dinajpur’s main bus stand to the village of Kantanagar (Tk 30, 30 minutes, 7am to 7pm). A more comfortable and efficient alternative is to grab a return CNG ride from Dinajpur (Tk 1000 including waiting time). From the main road where the bus drops you, it’s a lovely 10-minute walk to the temple past stretches of lush farmland, over a concrete river bridge and through a couple of mud-hut villages. En route, you can also stroll down to the river where, in the dry season, the sandbanks exposed by the dropping water levels make a handy cricket pitch for local kids.