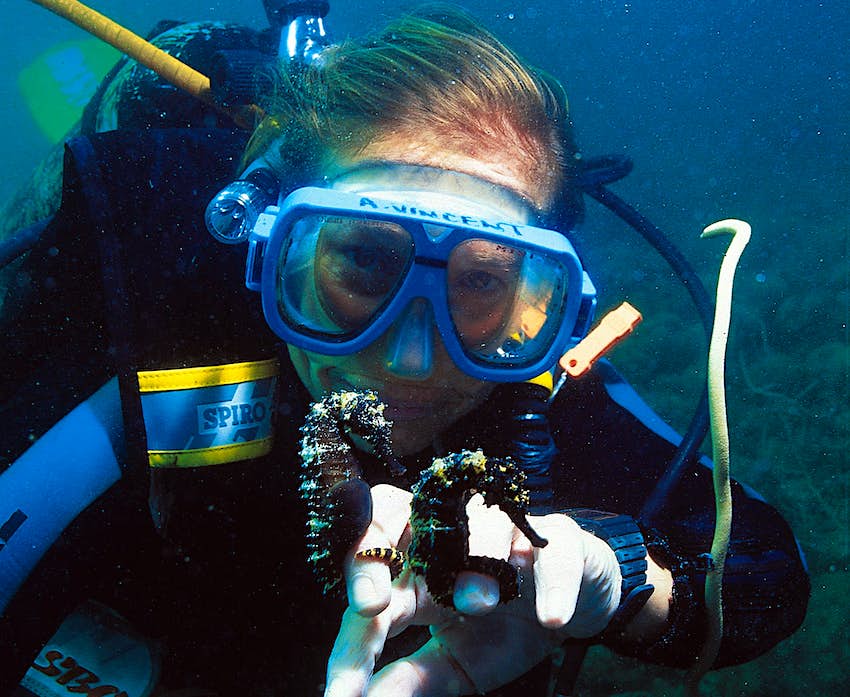 A seahorse biologist has been chosen as the recipient of the world’s top animal conservation award for 2020, having dedicated her life and career to understanding and advocating for seahorses, as well as working on a wide range of marine conservation issues.

Dr. Amanda Vincent is the first marine conservationist to win the Indianapolis Prize, which recognizes and rewards conservationists who have achieved major victories in advancing the sustainability of an animal species or group of species. A professor at the Institute for the Oceans and Fisheries at The University of British Columbia, she receives the unrestricted $250,000 prize that has been awarded by the Indianapolis Zoological Society, Inc. every second year since 2006.

Amanda directs Project Seahorse, and was the first biologist to study seahorses in the wild and establish a project for their conservation. She was initially drawn to research their extraordinary biology, where only males become pregnant and some species are monogamous. But she soon discovered the threats they faced. These include harmful fishing practices such as bottom trawling, where industrial nets are dragged across the ocean floor, destroying vital habitats such as coral reefs, mangroves and seagrass beds in the process.

Her achievements include successfully lobbying the global conservation community to include seahorses on the International Union for the Conservation of Nature’s Red List, and playing an instrumental role in persuading the United Nations Convention on International Trade in Endangered Species of Wild Fauna and Flora to adopt landmark legislation to regulate the global seahorse trade. After discovering the overfishing of seahorses for use in traditional medicines, aquariums, displays and souvenirs, she also partnered with local communities, industry groups, aquariums and governments around the world to develop sustainable approaches to seahorse trade.

As a result of Amanda’s relentless advocacy and efforts, 35 marine protected areas have been established where fishing is forbidden and populations of seahorses and other marine fish, such as sharks, rays, groupers and eels, can thrive. “Dr. Amanda Vincent’s determination to protect our oceans and the species that inhabit it is nothing short of heroic,” says Dr. Rob Shumaker, president and CEO of the Indianapolis Zoological Society, Inc.

To learn more about the award and previous prizewinners, please visit the Indianapolis Prize website here.

8 min read • Published about 23 hours ago