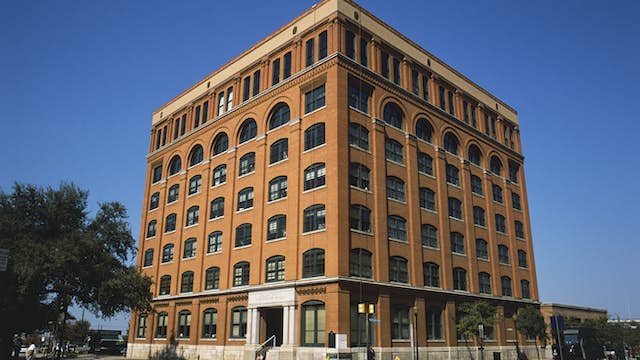 Dallas means many things to many people, but for tourists, the city is still indelibly linked to the assassination of President John F Kennedy. Movies and conspiracy theories have kept this momentous event alive in the popular consciousness ever since 22 November 1963. To understand what unfolded on that fateful day, the best place to start is the museum set in the very room in the former Texas School Book Depository where Lee Harvey Oswald – then an employee – lay in wait.

Housed on the sixth floor of the Book Depository, spanning the storage rooms where Oswald planned out and executed his deadly plot, this fascinating museum uses multimedia exhibits tell the story of JFK's life and times, not just his final moments. Photos and filmed footage – including footage shot by bystanders on the day of the assassination – provide some excellent historical context to help visitors understand JFK's lifetime and legacy.

Just as interesting are the exhibits on Oswald himself, and the opportunities that were missed to stop the events of 22 November 1963. An Italian-made Mannlicher-Carcano rifle – the same model used by Oswald – is displayed in the corner staircase, one of several parts of the museum that have been restored to match the way they appeared on the day of the assassination.

It’s shocking to realise just how close Kennedy's limo was to Oswald's sniper nest, but don’t worry if you have any doubts about the single-shooter explanation – the museum doesn't shy away from the myriad conspiracy theories. Should you wish to delve further, several local conspiracy theorists offer tours around Dealey Plaza and the Grassy Knoll that talk visitors through their own extravagant versions of events.

Even without a guide, it's worth wandering over to Elm Street, to see the 'X' marking the spot where JFK was hit as his motorcade trundled slowly past the Texas School Book Depository. There's an undeniable sense of momentous history here, even 60 years after the event. The park at Dealey Plaza was actually created to mark the location of the original settlement of Dallas, but today, visitors are much more interested in the Grassy Knoll, and the rumors of a second shooter that have ricocheted through history.

After the assassination, the building that changed American history was tagged for demolition, but Dallas governor Wes Wise pushed back against the plans and the former Texas School Book Depository was saved for posterity. The depot continued to serve as a store for school books until 1970, when it passed into private hands, before being redeveloped to house the Sixth Floor Museum and the offices of the Dallas County Administration in the 1980s.

Despite the rather gruesome subject matter, the museum is today a worthy addition to the list of best things to see in Dallas, and it's also an educational experience for children, though it probably has more resonance for US citizens than visiting youngsters. Across the plaza, the Old Red Museum has gentler exhibits on Dallas history, and just behind is architect Philip Johnson's John F Kennedy Memorial, a roofless cenotaph designed to capture the sense of change and freedom epitomized by JFK's presidency.

Tickets are easy to buy at the museum on the day, or you can book online. Bring a picnic to eat on Dealey Plaza in the middle of history.