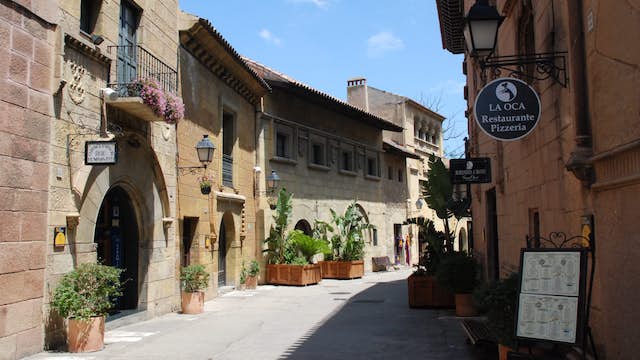 Welcome to Spain! All of it! This ‘Spanish Village’ is an intriguing scrapbook of Spanish architecture built for the local-crafts section of the 1929 World Exhibition. You can meander from Andalucía to Galicia in the space of a couple of hours, visiting surprisingly good to-scale copies of Spain's characteristic structures. The 117 buildings include restaurants, cafes, bars and clubs, and craft shops and workshops (for glass artists and other artisans), as well as souvenir stores.

Enter from beneath a towered medieval gate from Ávila, flanked by two Catalan gegants (papier-mâché giants). Inside on the right, an information office has free maps and a worthwhile multimedia guide (€3.50; leave a €20 deposit). Straight ahead from the gate is the Plaza Mayor (Town Sq), surrounded by mainly Castilian and Aragonese buildings; it sometimes hosts summer concerts. Elsewhere you’ll find an Andalucian barri (neighbourhood), a Basque street, Galician and Catalan quarters, and even a Catalan Romanesque monastery (at the eastern end).

There's also an excellent multimedia exhibition of some of Spain's most popular festivals, including Buñol's La Tomatina (a giant tomato fight in Valencia) and Semana Santa (Holy Week) in Andalucía.

Spare time for the Fundació Fran Daurel, an eclectic collection of more than 300 works of art, including sculptures, prints, ceramics and tapestries by modern artists ranging from Picasso and Miró to more contemporary figures such as Miquel Barceló, as well as a sculpture garden.

Children’s groups can participate in the two-hour Joc del Sarró (€6.50; multiple languages), in which kids go around the poble seeking answers to various mysteries.