Ten planes that changed the way we travel

To mark Lonely Planet’s sponsorship of the iconic 1917 Curtiss JN-4 ‘Flying Jenny’ Biplane’s commemorative air tour this summer we’re exploring aviation's history and continued impact on travel. Here’s our run-down of planes that have changed they way we travel.

You can find out more about the Jenny’s progress around the USA and the history of this beautiful plane at www.friendsofjenny.org. 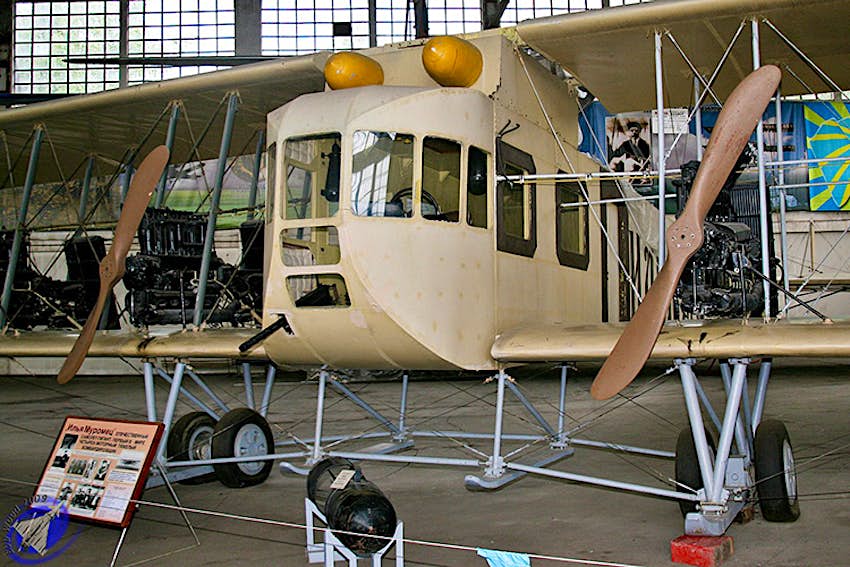 Well, sort of. In the early days of aviation there were many innovations that were curtailed in order to equip planes for wartime action, and so it is with the Sikorsky Ilya Muromets. When designed in 1913 this plane included a large enough fuselage for a separate, heated passenger saloon complete with comfy wicker chairs and washroom. World War I saw the plane become a heavy bomber, but the seeds of commercial aviation’s future were sown.

2. The oldest still-surviving airline takes off 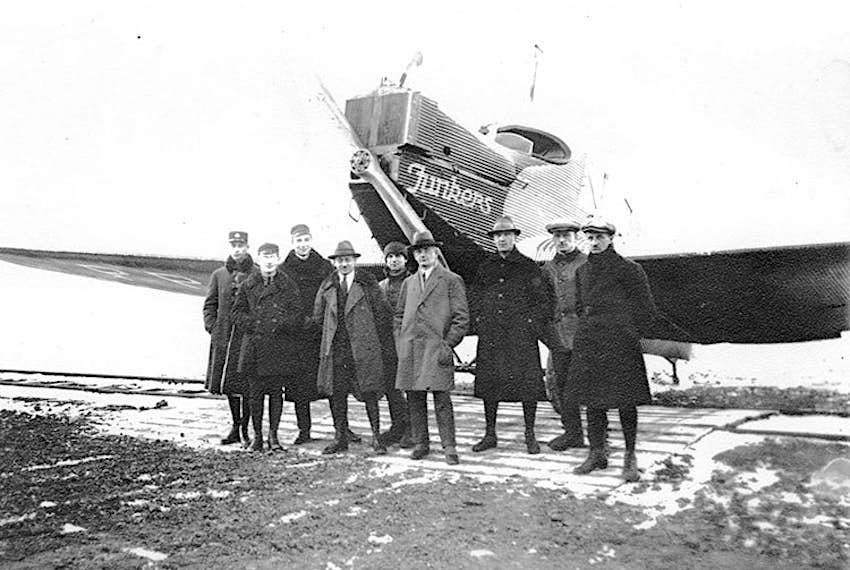 While the Junkers F13 was the world’s first all-metal passenger plane, the first flight by what we’d recognise as an airline today was KLM’s Airco De Haviland 16, flying from London’s Croydon Airport (still an interesting place for travel buffs to visit today) to Amsterdam. KLM merged with Air France in 2004 and is part of the SkyTeam alliance. 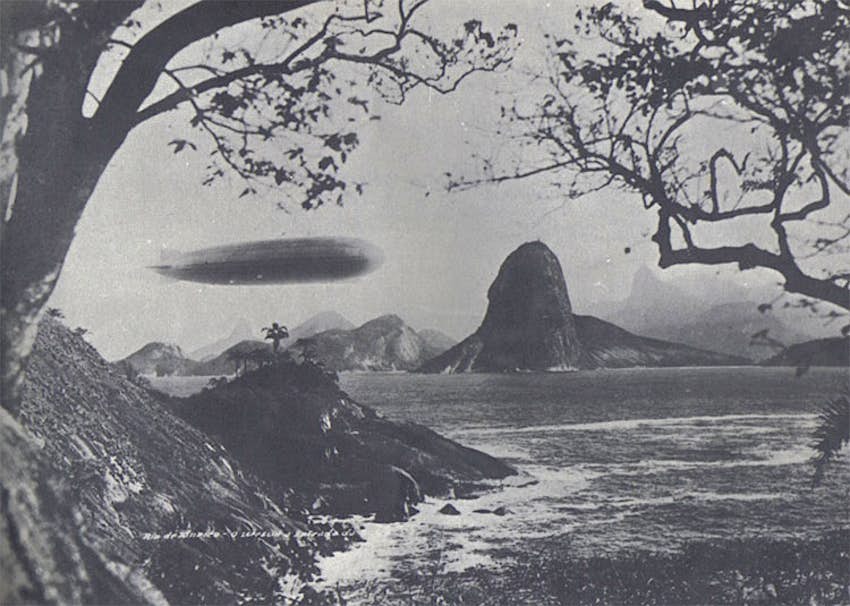 DELAG. Not exactly a name that trips off the tongue, and not even a plane, but the Deutsche Luftschiffahrts-Aktiengesellschaft or German Airship Travel Corporation does have a deeply historic claim to fame. Their LZ-127 Graf Zeppelin airship made regular scheduled transatlantic crossings at a time when regular passenger planes couldn’t make the jump. The hydrogen-filled airship travelled between Germany and Brazil until the Hindenburg disaster eroded public confidence in this mode of transport. One legacy of Zeppelin travel around the world are some amazing photos of the airship in exotic locales, eerily out of time. 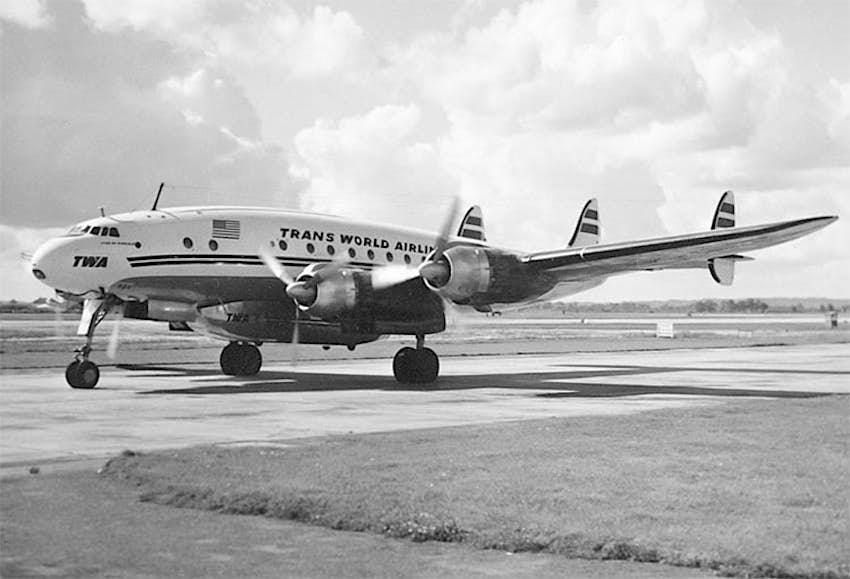 Without cabin pressure planes could neither go especially high, nor could they offer a truly comfortable experience for passengers. The Lockheed Constellation was the first commercial airliner to change that, setting a number of impressive records along the way. In fact the plane still holds the record for longest duration, non-stop passenger flight: TWA’s London to San Francisco route clocked in at a backside-numbing 23 hours and 19 minutes. You’d definitely need another gin and tonic after that one. 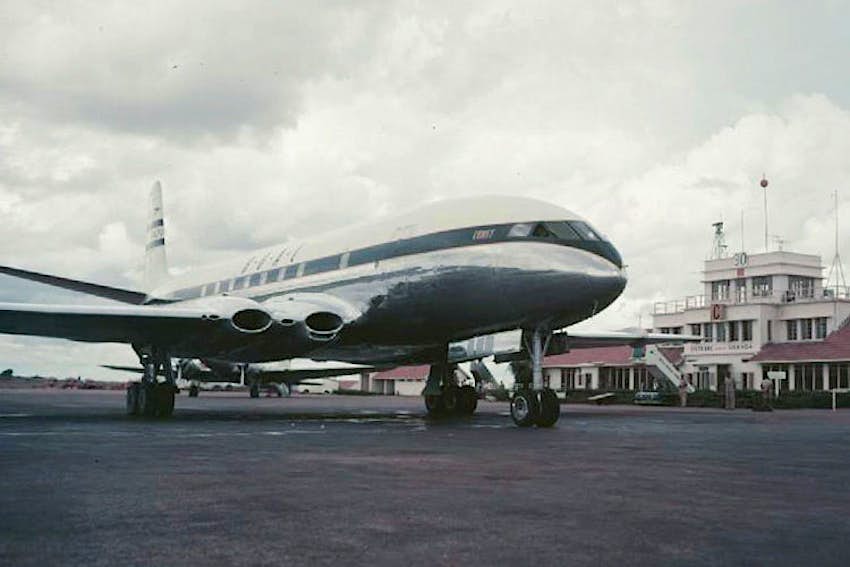 Looking for reasons why we can travel as quickly and cheaply as we do today? Start with the invention of the jet airliner. The De Haviland Comet was the first commercial jet airliner and took off on 2 May 1952 from London (Heathrow) Airport bound for Johannesburg via Beirut and Khartoum. Passengers paid £315 (US$533) return for a ticket. Despite the Comet’s subsequent problems it blazed a trail for aircraft that came after, as well as paving the way for air travel, previously expensive and elitist, to be a more democratic way of travelling around the world. 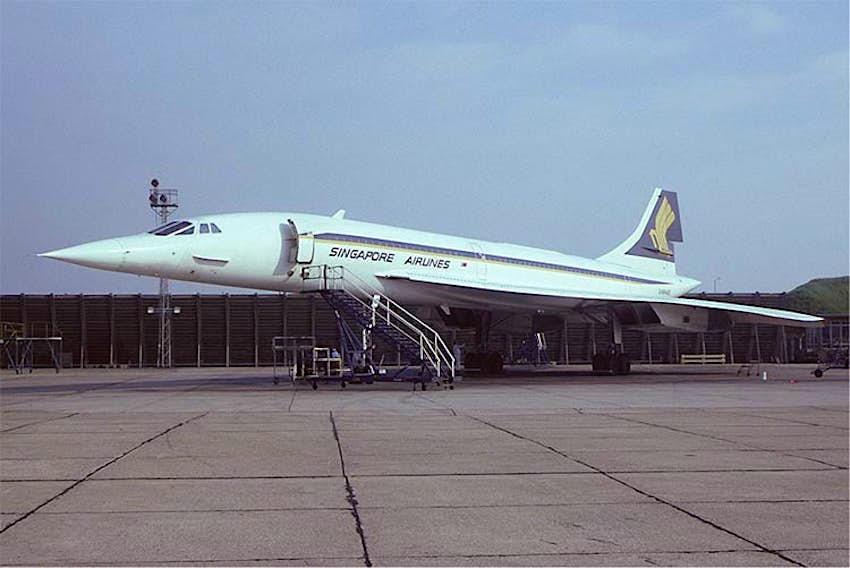 In an age of technological advancement it is unquestionable that flying transatlantic takes longer than it used to. The reason for that is simple: Concorde is no longer in service. This plane, arguably the most famous ever to fly, was capable of travelling at a top speed of over 1300mph. An especially zippy private jet today can travel at 900mph. Though beaten into the sky by the Soviet Tupolev TU-144, Air France and British Airways’ Concorde had a long and distinguished flight record until the crash that destroyed an Air France plane in Paris in 2000. Today there exists a strong body of opinion that the aircraft was retired too soon. 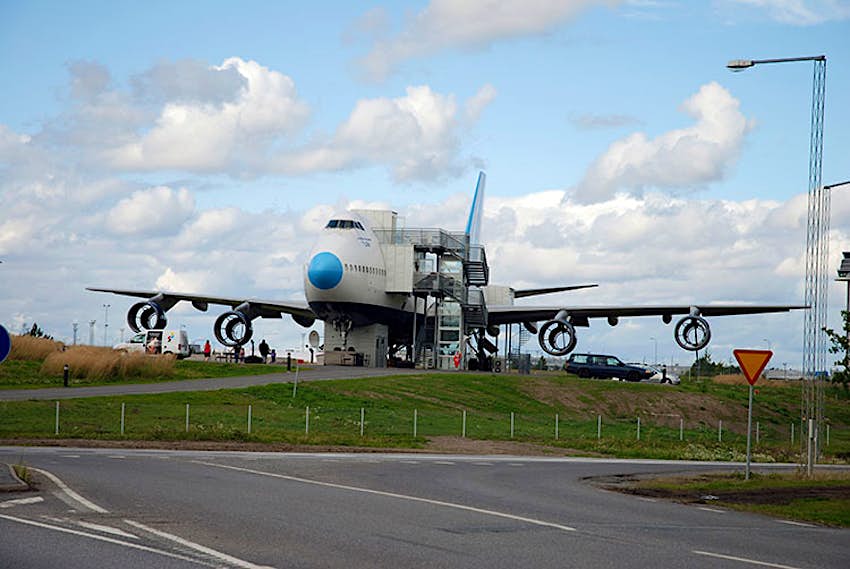 The bigger the plane, the more passengers can fit on it. And the 747 was the first of what we today know as widebody aircraft - comprising two aisles and, a revolutionary first on a passenger plane, a double deck for part of its length. The Jumbo Jet’s popularity since its debut in 1970 is such that over three times as many have been made and sold as originally expected. In fact, Boeing are still delivering new 747s today. You can even stay the night in a 747 by checking in at  Stockholm Arlanda Airport’s Jumbohostel (jumbohostel.com), where the pilot’s cabin forms the best room in the house. 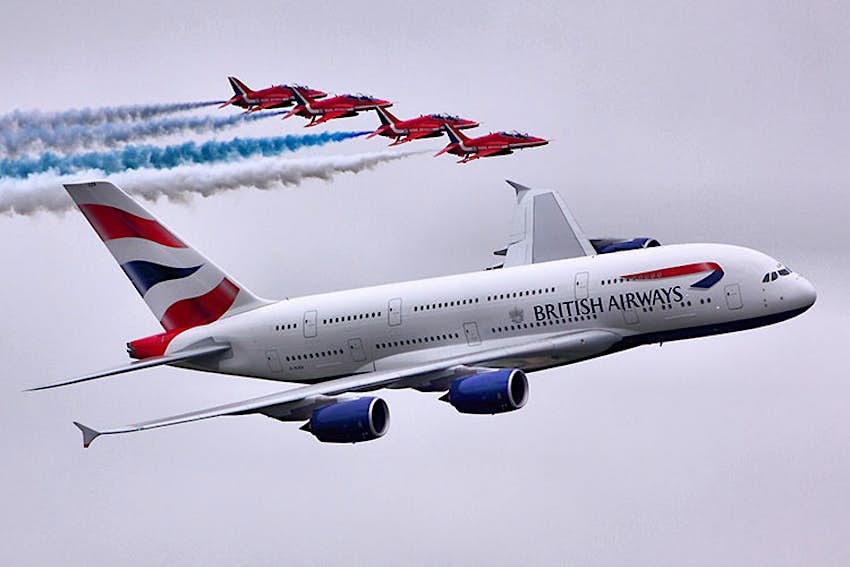 Whatever you think makes a great plane, the A380 has it in spades. It’s big - so large it required purpose-built facilities at airports it was flying to. The plane is comfortable and quiet, and makes a big splash for any airline getting their hands on one. The shape of its nose is recognisable from the ground, making it a distinctive presence in the skies. And it has a vast capacity: Russian carrier Transaero’s big birds will have 652 seats on its super long haul routes. 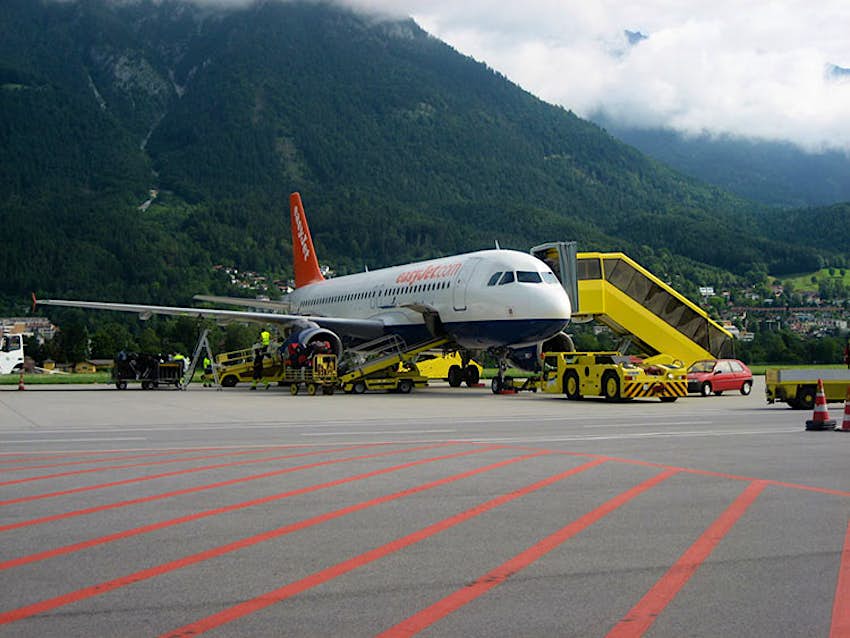 An easyJet A320 at Innsbruck airport. Image by Christopher Doyle / CC BY-SA 2.0

Low-cost airlines around the world tend to use versions of one of these two planes - both designed for short-to-medium haul, heavy use flying. If you've been on a city break or taken a budget flight for work you've probably been on one of these on many occasions. While not as spectacular as some of the planes on this list, both these airliners are quiet heroes of how we travel today. 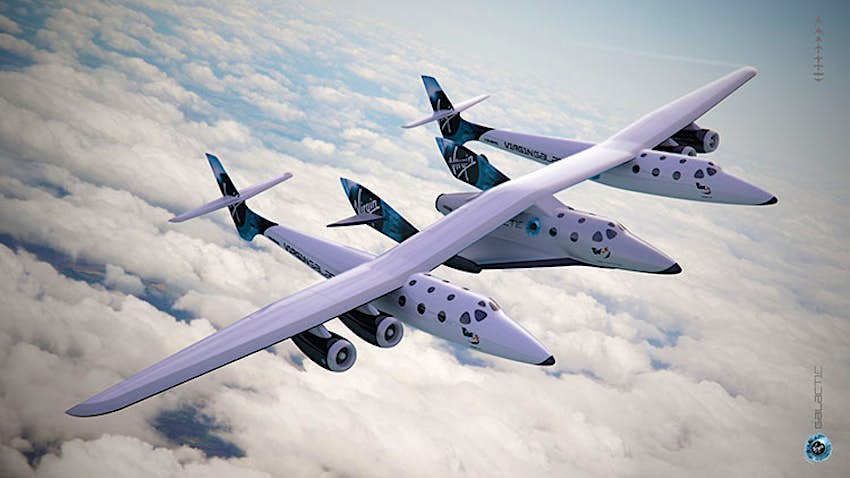 Where next? Surely Virgin Galactic’s ongoing efforts to send wealthy space tourists over the Final Frontier, and in doing so usher in a new age of futuristic travel. Several hundred would-be astronauts have committed to paying up to US$250,000 for a flight on SpaceShipTwo, the spaceplane designed to take paying customers into the upper atmosphere to experience weightlessness and get a view of the earth usually reserved for astronauts. The date for commencing operations is still to be confirmed, but paid, scheduled flights into space, or at least to the edge of it could once again turn the world of flying on its head.

Shakes on a plane: remote, unusual and downright scary airports…