The name Sipadan is uttered with reverence by divers, and with good reason. The underwater topography of this tiny 40-acre island, 36km south of the Malaysian port of Semporna in the Celebes Sea, is immense. There are a dozen or so excellent dives off Sipadan and on any given day you can expect to see sharks, numerous green turtles, schools of jackfish and barracuda. If you’re particularly lucky, you may catch sight of the most elusive denizens of the deep: the island is one of the last strongholds of the scalloped hammerhead shark.

A vast wall plunges 600m just a few metres from the shore, making for spectacular wall and drift dives, while the hundreds of coral species growing on top of the extinct volcanic cone that forms Sipadan are home to more than 3000 species of fish. These include larger pelagic species – white-tip reef sharks and grey reef sharks – as well as devil and eagle rays, and the strong currents that flow around the island attract large schools of barracuda, as well as occasional giant manta rays and whale sharks. 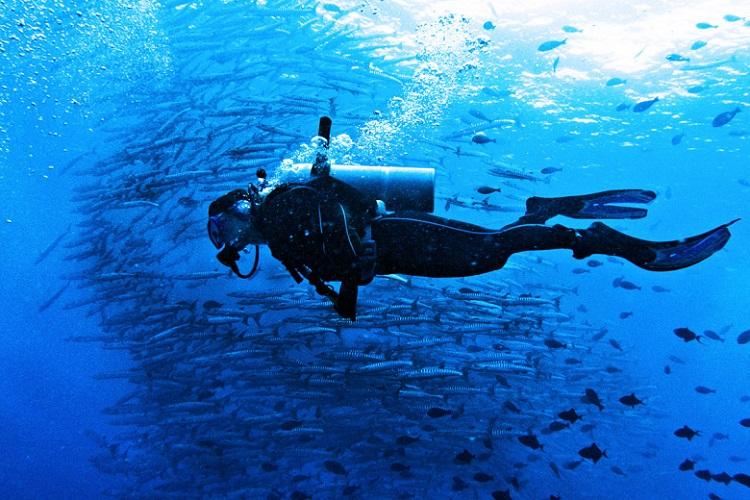 One of the island’s best dives takes its name from the large school of chevron barracuda often seen here. It’s a wall dive that reaches a wide channel with strong currents flowing through it; the barracuda are often seen at one end of the channel and one of the highlights is holding on to a rock and watching this immense vortex of silver and teeth. You may also see reef sharks along the channel floor, as they’re drawn to strong currents, as well as sinuous ribbons of spotted garden and moray eels, colourful lion fish, octopuses and scorpion fish, while green turtles often hang out in the shallows. 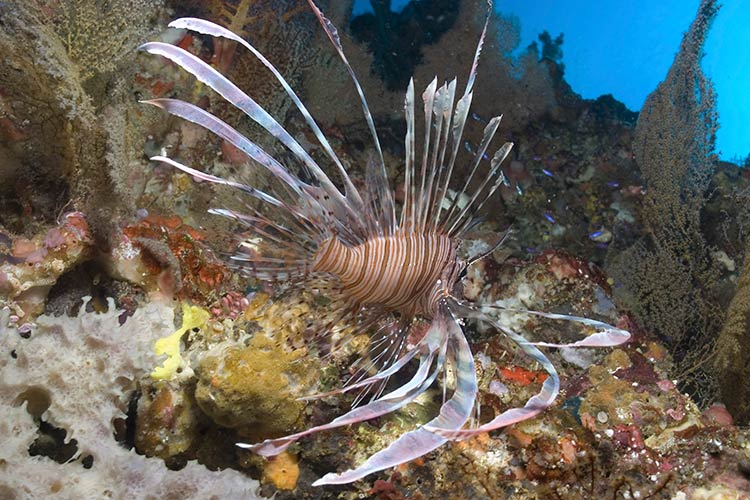 A lionfish swimming over coral off Sipidan. Image by Fotosearch Value / Getty Images.

Drop-off is just that – just 5m from the shore, the bottom falls away to a sheer 600m drop. As you descend along the wall, you may spot turtles resting on ledges. The most exciting part of the dive is Turtle Cave, a giant cavern opening 20m down that leads into a vast cave. It takes its name from the turtles that swam into the cave, got lost and drowned – whole skeletons were found resting on the bottom. You have to be properly certified to explore the cave, but even if you swim just a few metres in, you may spot its resident, solitary George, a giant barracuda that's over 2m long. You might also see a shark or three. A large school of jackfish tends to hang out near the cave, best seen as you’re ascending.

The western half of Sipadan is where the drop-off is greatest. Drift dives here are usually done in the afternoon, when the sun illuminates the wall, with the currents carrying you towards South Point. On good days, visibility reaches 40m and you may see some of the resident scalloped hammerheads on plateaus over 60m down, as well as grey reef sharks. The Hanging Gardens is a particularly colourful section of the wall, with numerous overhangs, barrel sponges and gorgonian sea fans, with morays, angelfish, groupers and sweetlips lurking in the crevices. The narrow crevices at Lobster Lair hide shy lobsters; Staghorn Crest is a garden of staghorn corals in shallow water, where angelfish abound, and the soft corals at West Ridge attract snappers, sweetlips, the occasional napoleon wrasse and groupers. 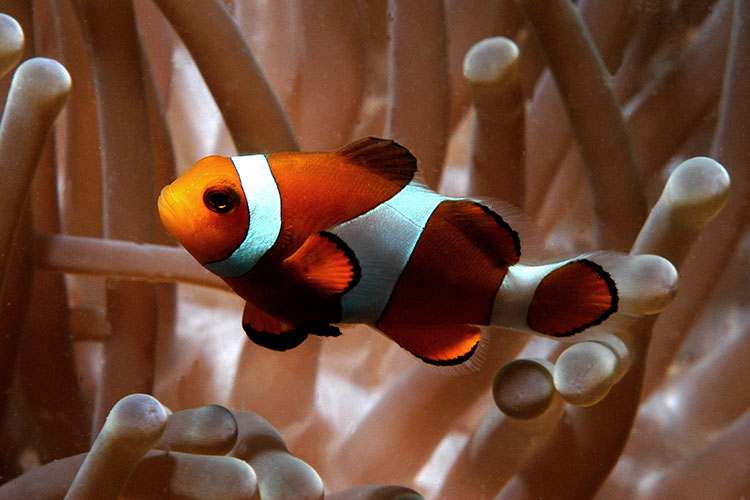 A clownfish resting amid the tentacles of an anenome. Image by Fotosearch Value / Getty Images.

South Point is at the opposite end of the island from Barracuda Point, and the strong currents here attract larger aquatic life – schools of grey reef sharks, white-tips and the odd rare leopard shark, as well as eagle rays, devil rays, giant manta rays and turtles. There are plenty of reef fish here also, such as sweetlips, moorish idols, yellowback fusiliers and red-tooth triggerfish, and macro divers should watch out for porcelain crabs, anemone shrimp, bubble coral shrimp and leaf scorpion fish in the shallows. The shallows also attract large schools of giant parrotfish that come to feed on table corals.

The dives on the east side of the island are best done when illuminated by the sun in the morning, and on good days you can let the currents carry you all the way from Turtle Patch towards Barracuda Point, passing the other three sites and spotting mantas, devil rays, giant tuna and pickhandle barracuda in the open water along the way. Mid-Reef is a popular gathering spot for green turtles and reef fish such as Moorish idols, cardinalfish, unicornfish and more. White-Tip Avenue is a favourite with white-tip reef sharks, while the corals and crevices shelter butterflyfish, emperor angelfish and scorpionfish. At Coral Gardens, in a shallow part on top of the wall, you can see pretty much every reef fish species in Sipadan’s waters – fire gobies, yellowmask angelfish, coral trout, you name it. 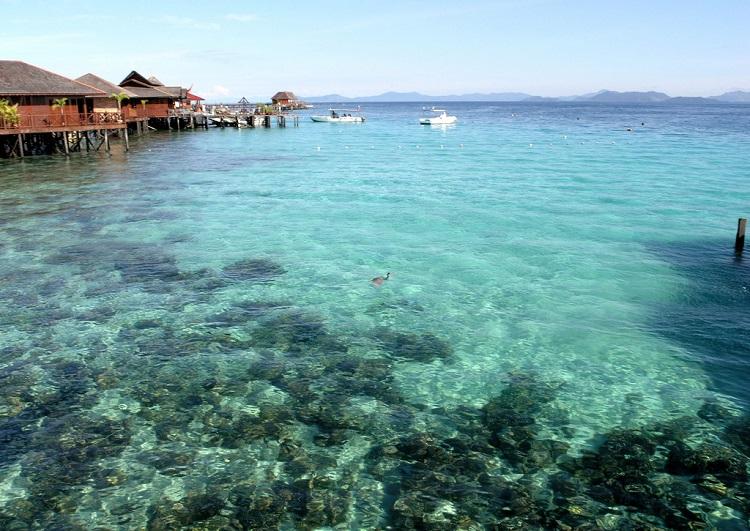 Huts over the water in Sipadan. Image by Matthew Lee / CC BY 2.0.

Sipadan is part of a protected marine conservation area and only 120 people are allowed entry per day. Twelve diving operators are allocated Sipadan permits; if you have your heart set on diving here, arrange your permit several weeks in advance – or up to six months in advance for peak season (July and August). All diving operators have representation in Semporna (reachable by bus from the nearest airport, in Tawau) and diving bases on the nearby island of Mabul; all offer packages that include accommodation, food and diving. Once you have chosen an operator, they’ll whisk you off to Mabul by boat. If you can’t get a Sipadan permit, all is not lost: there are spectacular shore, reef and drift dives off Mabul, Kapalai and other islands in the Semporna Archipelago.

One reputable operator is Borneo Divers, the original diving outfit responsible for showing Sipadan to venerable marine biologist Jacques Cousteau. It has a comfortable resort with air-conditioned rooms, and Sipadan diving packages start from 3060 Malaysian ringgit for a five-day, four-night stay. Scuba Junkie has highly professional, enthusiastic staff, and is spearheading the campaign to protect endangered shark species in the Semporna Archipelago. Its beachside resort has a mix of air-conditioned bungalows and comfortable dorms, and Sipadan diving packages start from 1820 ringgit (three days, two nights). The most unusual place to stay is the converted oil rig off the coast of Mabul, run by Seaventures, a highly regarded outfit that caters to experienced divers. You can dive straight under the rig: a four-day, three-night diving package costs 2730 ringgit.