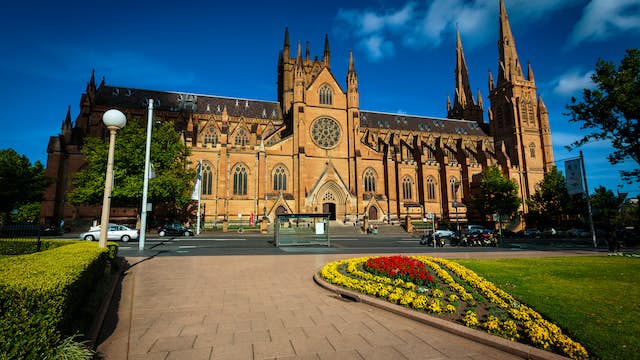 Sydney has traditionally been quite a Catholic city, and this is the hub of the faith. Built to last, this 106m-long sandstone Gothic Revival–style cathedral was begun in 1868, consecrated in 1905 and substantially finished in 1928, though the massive, 75m-high spires weren’t added until 2000. The crypt ($5 admission, 10am to 4pm weekdays) has bishops' tombs and an impressive cross-shaped terrazzo mosaic floor depicting the Creation, inspired by the Celtic-style illuminations of the Book of Kells.

The best time to visit is in the early morning and late afternoon, when the sun streams through the side stained-glass windows (made in Birmingham, England). That's because this cathedral has an unusual north–south orientation rather than the traditional east–west one (facing the rising sun), due to its size and the lie of the land.