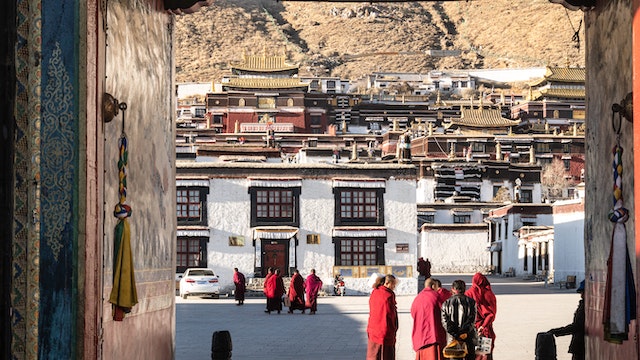 One of the few monasteries in Tibet to weather the stormy seas of the Cultural Revolution, Tashilhunpo remains relatively unscathed. It is a pleasure to explore the cobbled lanes twisting around its aged buildings. Covering 70,000 sq metres, the monastery is now the largest functioning religious institution in Tibet – home to around 950 monks – and one of its great monastic sights. The huge golden statue of the Future Buddha is the largest gilded statue in the world.

The ticket booth is located at the monastery's main southern entrance. From the entrance to the monastery, visitors get a grand view. Above the white monastic quarters is a crowd of ochre buildings topped with gold – the tombs of the past Panchen Lamas. To the right, and higher still, is the Festival Thangka Wall, hung with massive, colourful thangkas during festivals. Circumnavigating the exterior of the compound is a one-hour kora that takes you into the hills behind the monastery.

Morning is the best time to visit because more of the chapels are open. Monks start to lock chapels up for lunch after 12.30pm. Return around 6pm and you may find monks chanting in the main assembly hall.

Severe restrictions on photography are in place inside the monastic buildings. The going cost for a photograph varies but be prepared for a pricey ¥75 per chapel, and as high as ¥150 in the assembly hall. Video camera fees are an absurd ¥1000 to ¥1800 in some chapels.

Walk through the monastery and bear left for the first and probably most impressive of Tashilhunpo’s sights: the Chapel of Jampa (Jamkhang Chenmo). An entire building houses a 26m figure of Jampa (Maitreya), the Future Buddha. The statue was made in 1914 under the auspices of the ninth Panchen Lama and took some 900 artisans and labourers four years to complete. The impressive, finely crafted and serene-looking statue towers high over the viewer. Each of Jampa’s fingers is more than 1m long, and in excess of 300kg of gold went into his coating, much of which is also studded with precious stones. On the walls surrounding the image there are 1000 more gold paintings of Jampa set against a red background.

The Victory Chapel (Namgyel Lhakhang) is a centre for philosophy and houses a large statue of Tsongkhapa flanked by his two disciples, and also Jampa and Jampelyang (Manjushri). Look for the photo of the ninth Panchen Lama with his favourite dog.

The tomb of the 10th Panchen Lama (Serdung Sisum Namgyel) is a dazzling gold-plated funeral chörten. A statue of the 10th Panchen Lama, who died in 1989, is displayed atop the tomb. The ceiling of the chapel is painted with a Kalachakra (Dukhor in Tibetan) mandala, with a mural of the deity on the left wall, and the walls are painted with gold buddhas in various mudras (hand gestures). From here you can normally follow the pilgrims upstairs to proceed through a line of upper chapels, passing en route an image of the Chinese Emperor Qianlong who was a disciple of the sixth Panchen Lama.

The gold-roofed chapel holds the tomb of the fourth Panchen Lama (Kundun Lhakhang), Lobsang Choekyi Gyeltsen (1567–1662), teacher of the fifth Dalai Lama. This was the only mausoleum at Tashilhunpo to be spared during the Cultural Revolution. The 11m-high funerary chörten is inlaid with semiprecious stones and contains 85kg of gold.

The Kelsang Temple is a remarkable collection of buildings, with its centrepiece large courtyard the focus of festival and monastic activities. It's a fascinating place to sit and watch the pilgrims and monks go about their business. Monks congregate here before their lunchtime service in the main assembly hall. A huge prayer pole rears from the centre of the flagged courtyard and the surrounding walls are painted with buddhas. Pilgrims put their ears up to a shrine of Drölma, who is said to have the power of speech.

The assembly hall is one of the oldest buildings in Tashilhunpo, dating from the 15th-century founding of the monastery. The massive throne that dominates the centre of the hall is the throne of the Panchen Lamas. The hall is a dark, moody place, with rows of mounted cushions for monks, and long thangkas, depicting the various incarnations of the Panchen Lama, suspended from the ceiling. The central inner chapel holds a wonderfully ornate statue of Sakyamuni (Sakya Thukpa), while the chapel to the right holds several images of Drölma (Tara). Pilgrims crawl around this chapel underneath shelves of Buddhist scriptures.

There are a dozen other chapels in the complex on this floor. Follow the pilgrims on a clockwise circuit, ending up in a tangle of chapels above the assembly hall. Here in the far left (upper) corner chapel you’ll find views of the two-storey Jampa statue below and, to the right, the tombs of the first and third Panchen Lamas and first Dalai Lama, with a fine mural of Buddha descending to earth (as celebrated in Tibet's Lhabab Dechen festival). Look for the golden footprint of the first Dalai Lama mounted on the pillar.

Descend to the middle floor and do another clockwise circuit, taking in the interesting corner printing press, where monks sell block prints and protective amulets.

As you leave Tashilhunpo, it is also possible to visit the monastery’s two remaining colleges, the Tantric College and the brown Philosophy College. They are on the left-hand side as you walk down towards the main gate. Neither is particularly interesting but you might be lucky and find yourself in time for debating, which is held in the courtyard of the Philosophy College.