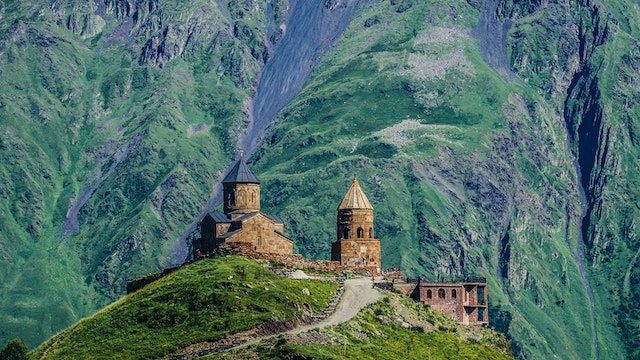 This 14th-century church 2200m above Stepantsminda has become almost a symbol of Georgia for its incomparably photogenic hilltop setting with mighty Mt Kazbek rising behind it, and for the fierce determination involved in building it on such a lofty, isolated perch. A circuitous new road leads up to the church (return trip by taxi 40 GEL to 60 GEL), but you can walk up to the church in one to 1½ hours from Stepantsminda. The views back over Stepantsminda are incredible.

Vakhushti Batonishvili wrote in the 18th century that in times of danger the treasures from Mtskheta, as well as St Nino’s cross, were kept at Tsminda Sameba for safety. In 1988 the Soviet authorities constructed a cable-car line to the church, with one station right next to Tsminda Sameba. The people of Stepantsminda felt it defiled their sacred place and soon destroyed it.

The beautifully weathered stone church is decorated with intriguing carvings, one on the bell tower appearing to show two dinosaurs.

There are several ways of walking up from Stepantsminda. For the best distance-gradient compromise, walk up through Gergeti village to a T-junction 1.25km from the main road (80m after signs indicating the car track to the right). Go left at the T-junction, out past the last village buildings, and up beside a stream. About 120m past the last building, fork up to the right, passing to the right of a ruined stone tower; 200m after the tower take an initially lesser path diverging up to the right. This curves up round the hillside to reach the church in 1km. The new road has meant that the church is crowded these days with tour buses arriving with regularity. Come early or after 5pm to enjoy the church at its quietest.