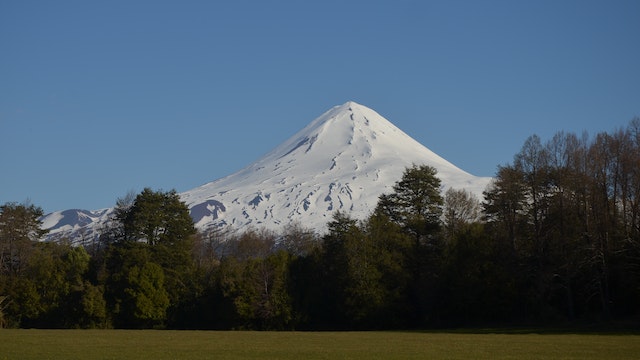 The 3125m Volcán Llaima, one of Chile's most active volcanoes, forms the focal point of Parque Nacional Conguillío and the Unesco Biosphere Reserve in which its included, a magnificent and otherworldly national park, created in 1950 primarily to preserve the araucaria (monkey puzzle tree) and 608 sq km of alpine lakes, deep canyons and native forests. Llaima, which means ‘Blood Veins’ in Mapudungun, has quite the habit of firespitting, violently erupting 35 times since 1640.

The most recent eruption occurred on New Year's Day 2008, when this indomitable beast spewed fiery lava 300m into the air and created a 20km-long plume of billowing smoke that forced Chile's National Forestry Corporation (Conaf) to evacuate 43 trapped tourists as well as 11 of its own employees from the park; an additional 40 people were evacuated when a second eruption occurred. You can access Parque Nacional Conguillío from three directions. The first, and shortest (80km), is directly east of Temuco via Vilcún and Cherquenco; or take the more northern route from Temuco via Curacautín (120km); or access the park’s southern entrance, also 120km from Temuco, via Melipeuco.

You must stop at CONAF's control post, 6km before Laguna Captrén, to register your entrance to the park as well as pay the entrance fee.