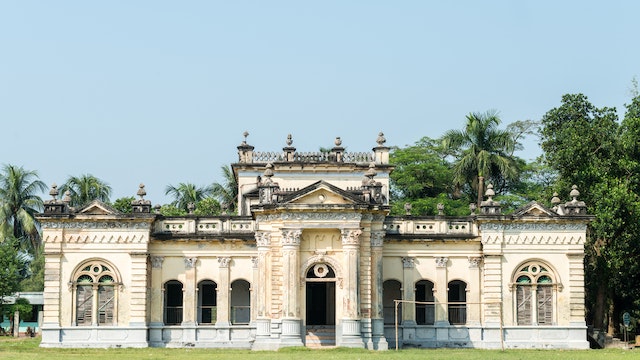 One of the oldest rajbaris in Bangladesh (dating from the early 1700s), the magnificent but dilapidated Natore Rajbari was once the nerve-centre of undivided Bengal's second-biggest zamindari (land revenue estate), which lost its sheen in the 19th century. The entire complex – moated by ponds and lined by centuries-old shady trees – is actually a series of seven rajbaris, four of which remain largely intact. One palace houses a police camp, another is a government office, while several others simply lie in ruins.

The main palace block within the compund, called Boro Taraf ('big palace'; home of the elder patriarch of the family), is approached via a long avenue lined with impressively tall bottle palms, the white trunks of which resemble temple columns. To the rear of Boro Taraf are the crumbling walls of Rani Bhavani's Palace, which was the residence of the eponymous Rani Bhavani, the widowed wife of one of the Natore rajas who took up the reins of the estate and went on to become a very powerful administrator herself.

To the far end of the complex stands a second palace block called Chhoto Taraf ('small palace'; for the younger brother of the family), consisting of two rajbaris. The principal one faces a pond and is one of the most beautifully proportioned buildings in Bangladesh, although its cavernous central hall is now in a complete shambles. Entry is restricted, but peering through the broken window slats is allowed.

The peaceful and idyllic gardens around the palaces are as much an attraction as the buildings themselves; bring a picnic to eat in the shade of a gnarled old tree. There are several large ponds here that form an interesting centrepiece, around which are a couple of Hindu temples, one dedicated to Kali and another to Shiva. Both are still used by the many Hindus in the area and attract the odd sadhu (itinerant holy man), unusually for Bangladesh.

Natore Rajbari is on the northern edge of town. From the bus stand, you can walk to it in about half an hour (just keep asking for directions) or take a rickshaw (Tk 30).