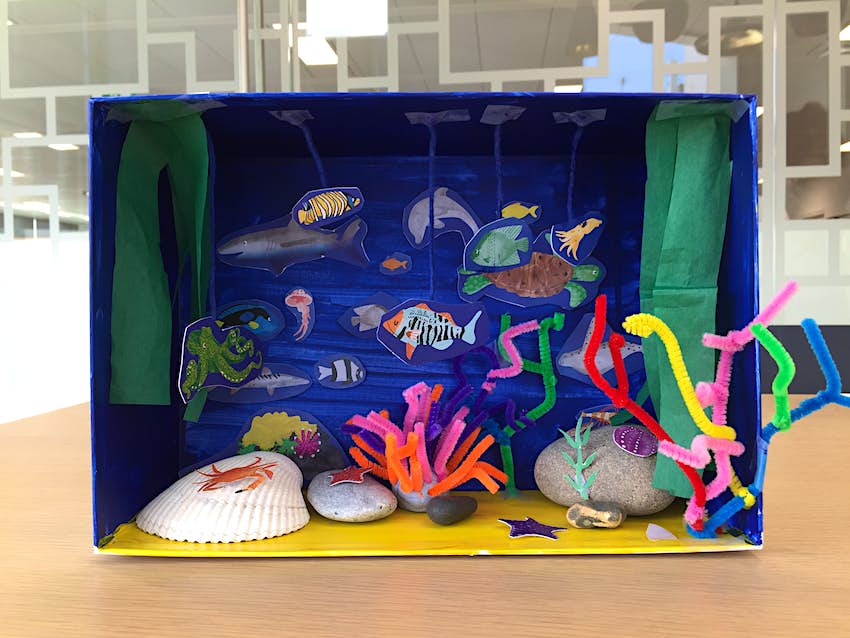 Inspired by our newly-released books for animal lovers, The Animal Book and How Animals Build, we’ve decided to dive into the deep and create an underwater animal scene in a shoebox! Print out our sea creatures, then follow the simple step-by-step guide below to make your own ocean odyssey. Don’t forget to ask for an adult’s help when using the scissors.

Remove and discard the lid from the cardboard box. Painting the inside of the box, cover the back, sides and top in blue and leave to dry.

Paint the remaining panel on the bottom yellow to represent the seabed.

Ask an adult to help you use scissors to cut out the colourful sea creatures. You can leave a blue border on most of them to camouflage against the blue background of the scene!

With some of your sea creatures, such as starfish, shells and sea urchins, you can cut the designs without any blue border and stick them onto shells or pebbles you've collected, to sit on the seabed!

Mould a large piece of sticky tack into a ball. Then cut pieces of pipe cleaner into smaller wires and push into the sticky tack to secure. Bend the pipe cleaners slightly so that they create the effect of a wiggly sea anemone in the waves!

Use some more colourful pipe cleaners to twist and bend into sea coral shapes. Attach the pipes to one another by twisting the ends tightly around the adjoining pipe and bend in places accordingly, then use sticky tape to secure it to the shoebox scene.

Using different lengths of string and sticky tape, attach your remaining sea creatures to the top of the shoebox.

Add the rest of your stones, shells, sea creatures, sea anemones and coral to your scene.

Attach the tissue paper on either side like flowing seaweed curtains. Voila! You've created a busy underwater ocean scene to display at home!

7 min read • Published about 11 hours ago

5 min read • Published about 11 hours ago

Say hello to autumn on these 10 beautiful Georgia hikes

9 min read • Published about 12 hours ago