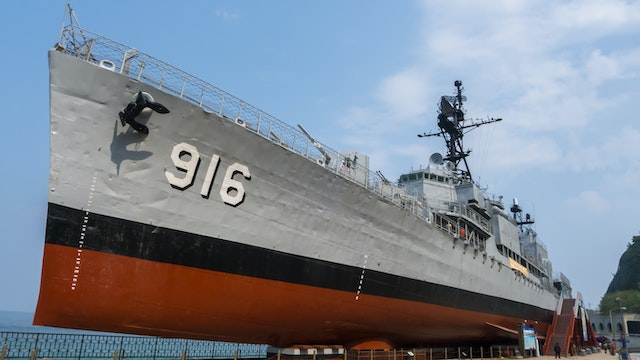 The main two spectacles at this seaside attraction are a warship and a red and green North Korean submarine. The 35m-long submarine was spying on military facilities near Gangneung in 1996 when it ran aground off Jeongdongjin. The damage to the rear of the vessel is still visible but what is perhaps most incredible is the astonishingly cramped interior. The much larger warship was built in America in 1945, saw action in WWII and the Vietnam War, and was donated to South Korea in 1972.

The warship's interior has been refurbished as an exhibition on Korean naval history with glimpses of sleeping quarters and mess halls. It's interesting to wander the decks, inspect the 40mm and 5-inch guns and patrol the bridge, the captain's office and the radio transmission room.

When the submarine ran aground, the commander burned important documents (the fire-blackened compartment is still visible) and the 26 soldiers made a break for shore, hoping to return to North Korea. It took South Korea 49 days to capture or kill them (except one, who went missing); during the manhunt 17 South Korean civilians and soldiers were killed and 22 injured.

There are also military planes to the north, an exposed 20-minute walk along the highway.

Unification Park is 4km north of the Jeongdongjin train station along the coastal road. As you exit the train station, turn left and look for the bus stop along the row of restaurants. Take bus 111, 111-1, 112 or 113 (₩1300, 20 minutes, hourly) and get out right after the warship, at the third stop once you hit the coastal road.