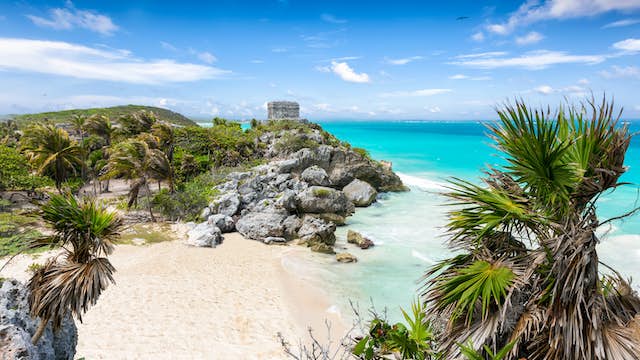 Rising dramatically from a seaside bluff, El Castillo is the tallest and most imposing structure of the  Tulum Ruins. The 7.5-meter-tall stone structure served as a temple and lighthouse, guiding pre-Colombian tradesmen in long dugout canoes safely to shore. Today, it is one of the most photographed structures in Tulum – and one of the most visited archaeological zones in all of Mexico. And it’s no wonder – sitting high above the turquoise water, a white sand beach below, an ancient city spread before it – El Castillo is like no other pyramid in the Maya world.

El Castillo was built in several phases, each on top of the last, a common Maya practice that added loft and status to a building. The pyramid as it appears today dates to the late 13th century – Tulum’s glory days – when it served as an important port town, controlling maritime commerce along the Caribbean coast to Belize.

The first western record of El Castillo comes from Juan de Grijalva’s Spanish expedition, which sailed past in 1518; sailors saw the walled city with its magnificent red ‘fortress,’ a ceremonial fire burning on its uppermost reaches. The view did not last long – El Castillo and the city of Tulum were abandoned just 75 years later, the population decimated by disease brought by Europeans. It wasn’t until 1843 that an etching of El Castillo by the architect and explorer Frederick Catherwood was shared with the outside world; published in the now-famous Incidents of Travel in Yucatán, it was the striking image of the pyramid overtaken by the jungle, the roots of trees and plants gripping the walls. Archaeologists did not begin excavating the site until 1913; their work still continues today.

El Castillo is the centerpiece of Tulum Ruins.  Once covered in stucco and painted bright red, it sat like a sentinel on a 12-meter-high seaside cliff, an imposing structure to all who passed. It is believed to have served two critical functions. The eastern side, with its commanding view over the Caribbean, functioned as a lighthouse; a fire burning at the top marked a break in the barrier reef, helping merchants navigate safely to Tulum’s shores. Two small windows near the top also are thought to have been used as navigational tools at dusk, the sight of sunlight streaming through both windows an indication to boat captains that they were on a safe path to shore.

The pyramid’s western side, facing the central plaza, was reserved for religious purposes. The grand staircase is crowned by a temple, the platform in front of it used for ceremonies by Maya priests, the residents of the city congregating below. Two smaller temples, flanking the staircase, were used for sacrificial offerings. Throughout the pyramid look for images of plumed serpents: columns shaped like snakes, feathered serpents hugging the corners, lintels over doorways with snake motifs. These are all symbols of the deity Kukulcán, and evidence of Toltec influence here. Don’t miss the relief figure of a Descending God on the façade, the image associated with the highly revered god of the bees, the most iconic image of Tulum.

Just below El Castillo lies a picture-perfect swimming beach, one of the best beaches in Tulum and the same place where Maya tradesmen arrived 800 years ago, their canoes loaded down with goods from faraway lands. It’s a one-of-a-kind experience to swim at the foot of a Maya pyramid – don’t miss it! A steep wood staircase behind El Castillo leads you there. Come early to avoid the crowds.

El Castillo means ‘The Castle,’ a name given to it by Spaniards because of its fortress-like features.

El Castillo has a path circling it, making it easy to take in from all sides. However, climbing or entering the structure is no longer permitted – a rule that’s strictly enforced in order to protect the pyramid from further erosion. Unfortunately, this means the uppermost temple – its snake-like columns and doorway lintels – is off-limits to visitors.

If you’re on a tour, you’re sure to stop at El Castillo; many guides also carry photos for details that are tough to see from the ground.

Getting to El Castillo

El Castillo sits at the heart of Tulum Ruins; it overlooks the central plaza on one side and the Caribbean on the other. From the site’s entrance – an opening on the northern wall – to El Castillo, it’s about 250m, passing several of the archaeological site’s principal structures along the way. Given it’s the tallest structure on the site, it’s also visible from many different vantage points. It’s impossible to miss.

Things you should know

Admission to Tulum Ruins costs M$80 and includes every structure onsite, including El Castillo. Details about ruins - opening hours, eating and drinking, getting there and more are here.