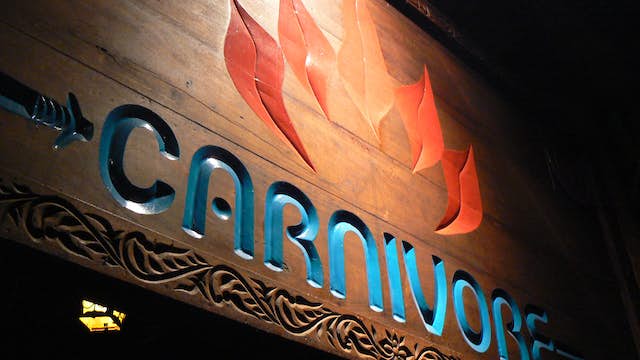 Love it or hate it, Carnivore serves up Kenya's most famous nyama choma (barbecued meat) – it's been an icon for tourists, expats and wealthier locals for over 25 years. At the entrance is a huge barbecue pit laden with real swords of beef, pork, lamb, chicken and farmed game meats such as crocodile and ostrich. It's a memorable night out.

UK magazine Restaurant named Carnivore one of the 50 best restaurants in the world in 2002 and 2003, when you could dine here on exotic game meats. Its legend seemed assured. In recent years, however, strict new hunting laws mean that zebra, hartebeest, kudu and the like are now off the menu, and you have to be content with camel, ostrich and crocodile in addition to more standard offerings. You also get soup, salads and sauces to go with the meats.

The experience works on a simple all-you-can-eat basis: as long as the paper flag on your table is flying, beautifully attired waiters will keep bringing the meat, which is carved right at the table. If you’re in need of a breather, you can tip the flag over temporarily before eventually admitting defeat.

At lunchtime you can get to Carnivore by matatu 126 from the city centre – the turn-off is signposted just past Wilson Airport, and from the stop it’s a 1km walk. At night it’s best to hire a taxi, which should cost about KSh1000 each way, depending on your bargaining skills.