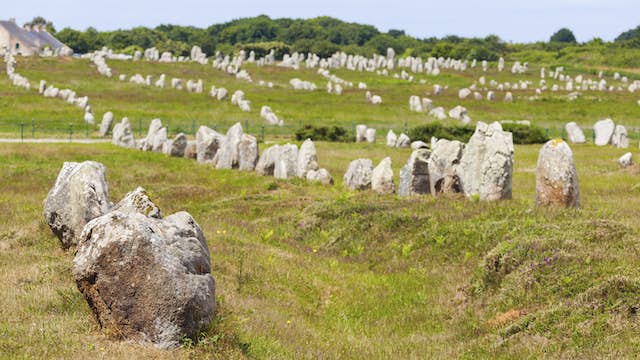 Predating Stonehenge by around 100 years, the Carnac (Garnag in Breton) area is the world's greatest concentration of megalithic sites, with no fewer than 3000 of these upright stones, erected between 5000 and 3500 BC. One km north of Carnac-Ville a vast array of monoliths form several distinct alignments, all visible from the road, though fenced for controlled admission. The best way to appreciate the stones' sheer numbers is to walk or bike between the Ménec and Kerlescan groups.

Between June and September seven buses a day run between the two sites, as well as Carnac-Ville and Carnac-Plage. They constitute an astonishing sight, even if you are not an archaeologist, and even though their purpose remains obscure, the area hums with mystery.

Near the stones, the Maison des Mégalithes explores the history of the site and offers guided visits. Due to severe erosion of the flora, the sites are fenced off to allow the vegetation to regenerate, and certain areas are accessible only by guided tour. However, from October to March you can wander freely through parts – the Maison des Mégalithes has maps of what's currently open.

Opposite the Maison des Mégalithes, stand the Alignements du Ménec. The road along here is called the Route des Alignements, indeed the best way of getting here and exploring the region is by car.

From here, the D196 heads northeast for about 1.5km to the equally impressive Alignements de Kermario. Climb the stone observation tower – the Moulin de Kermaux (an old mill) – midway along the site to see the alignment from above.

The fascinating Tumulus de Kercado – which you can enter and explore - lies just east of Kermario and 500m to the south of the D196. About 300m east of the Kercado turnoff along the D196, lies the parking area for the Géant du Manio, the tallest menhir in the area. Further east, you can find the Alignements de Kerlescan, a smaller grouping. In Carnac-Ville, you can climb up the huge Tumulus St-Michel for terrific views over the countryside.