The Lycian Way is one of the world’s great long-distance hiking trails, regularly featuring in top-10 lists for its unique combination of Mediterranean views, mountainous hinterland, Turkish culture and ancient ruins.

Its pull on the imagination is undeniable, and it wasn’t long ago that its mix of stunning coastline, resort towns and rustic villages pulled me in. The 540km waymarked footpath – typically a 29-day trek – follows the bulging outline of the Teke Peninsula between the tourist towns of Fethiye and Antalya. Along the way, it skirts the coast and climbs up into the rugged backcountry. This stretch of dramatic Mediterranean coastline, its beaches and vertiginous sea cliffs overlooked by the olive-grove-dotted foothills of the Western Taurus Mountains, where travellers can explore moss-covered chambers of history’s first proto-democratic union.

Here lies the stomping ground of the mysterious Lycian League, credited with establishing the world’s first parliament at Patara, before they were absorbed by the Roman Empire. Their crumbling burial monuments add further lyricism to the scenery, and I couldn’t wait to experience the whole thing. 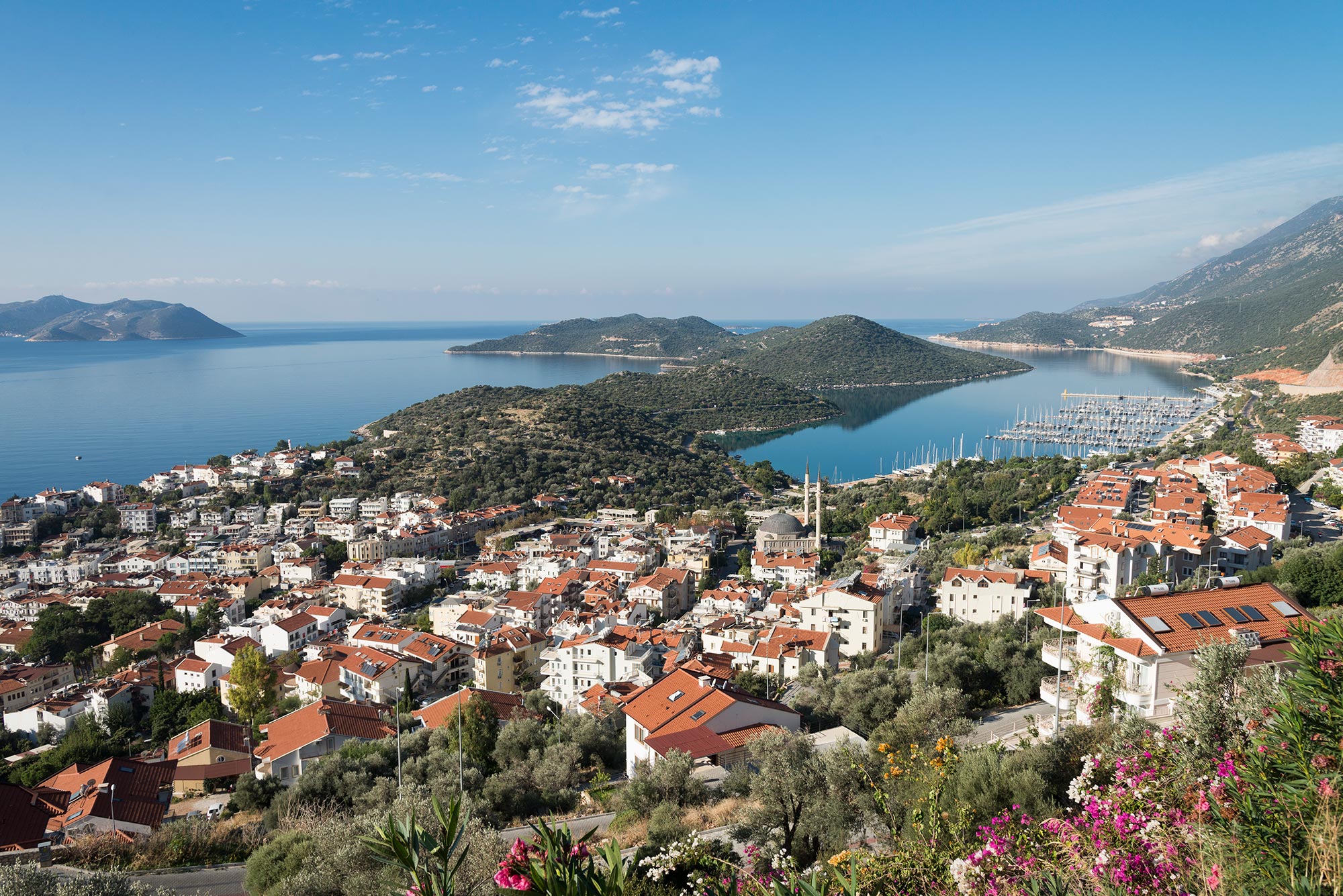 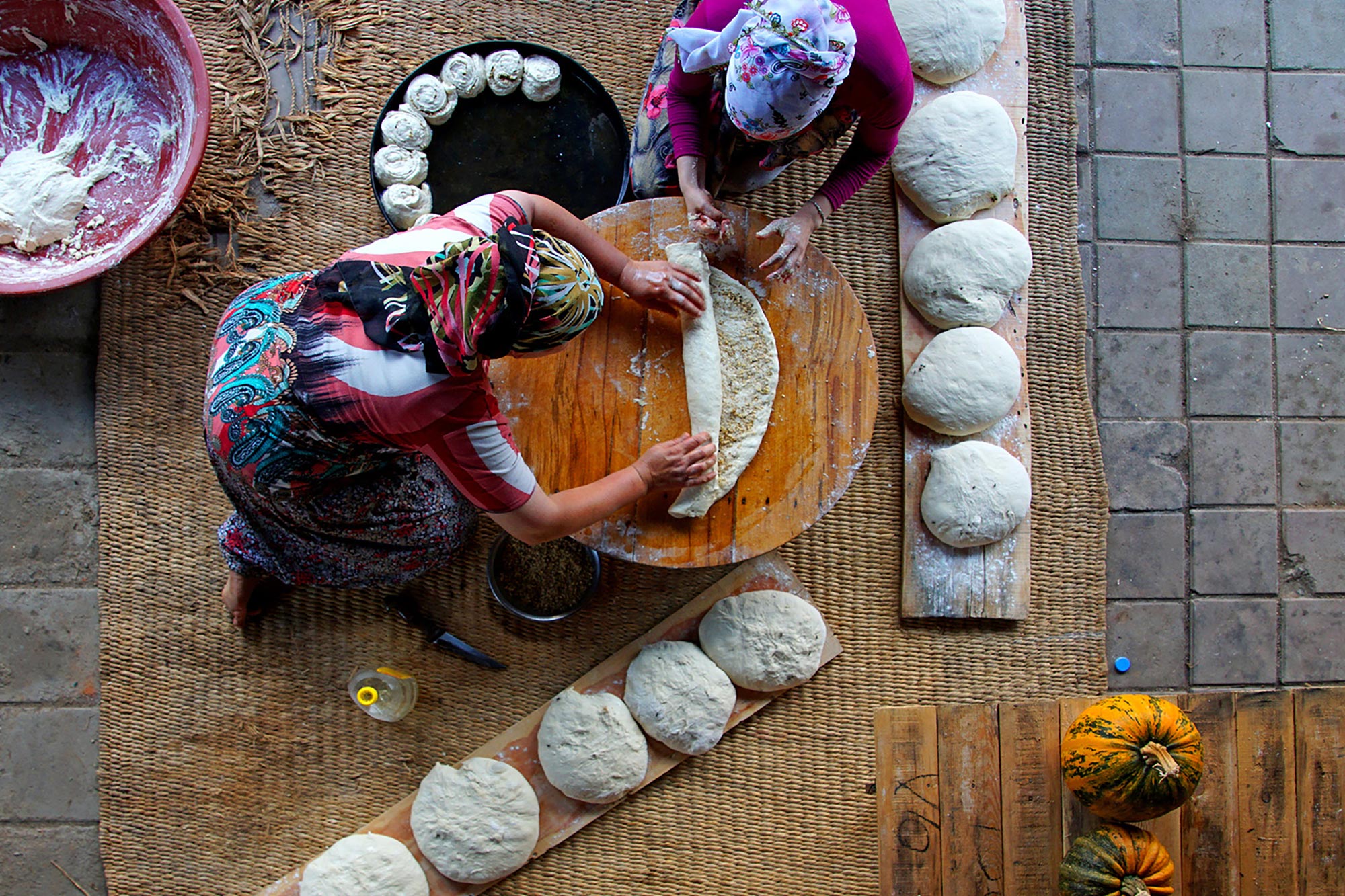 Rolling out Gözleme © Veysel Kaya / Ministry of Culture and Tourism 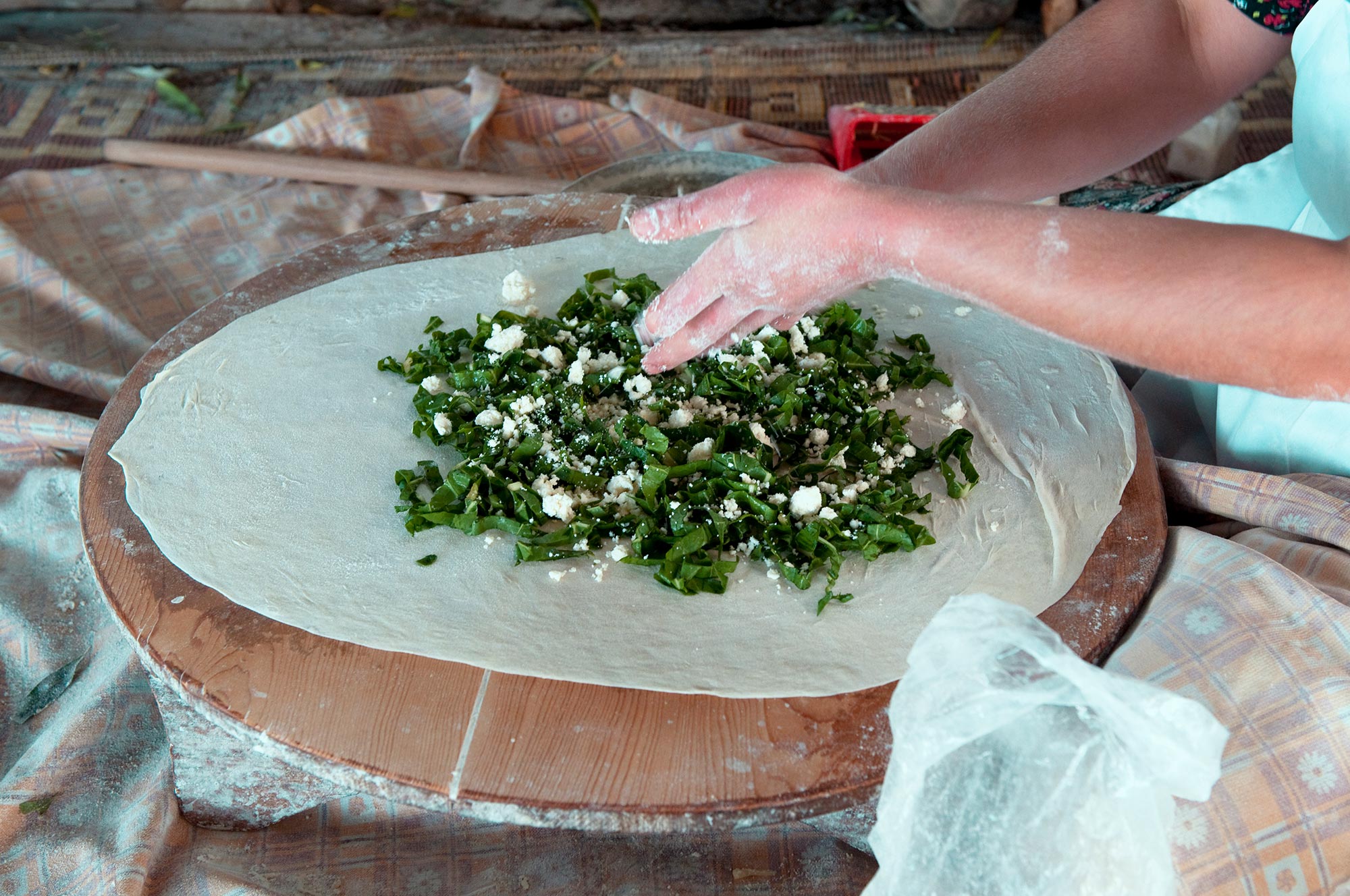 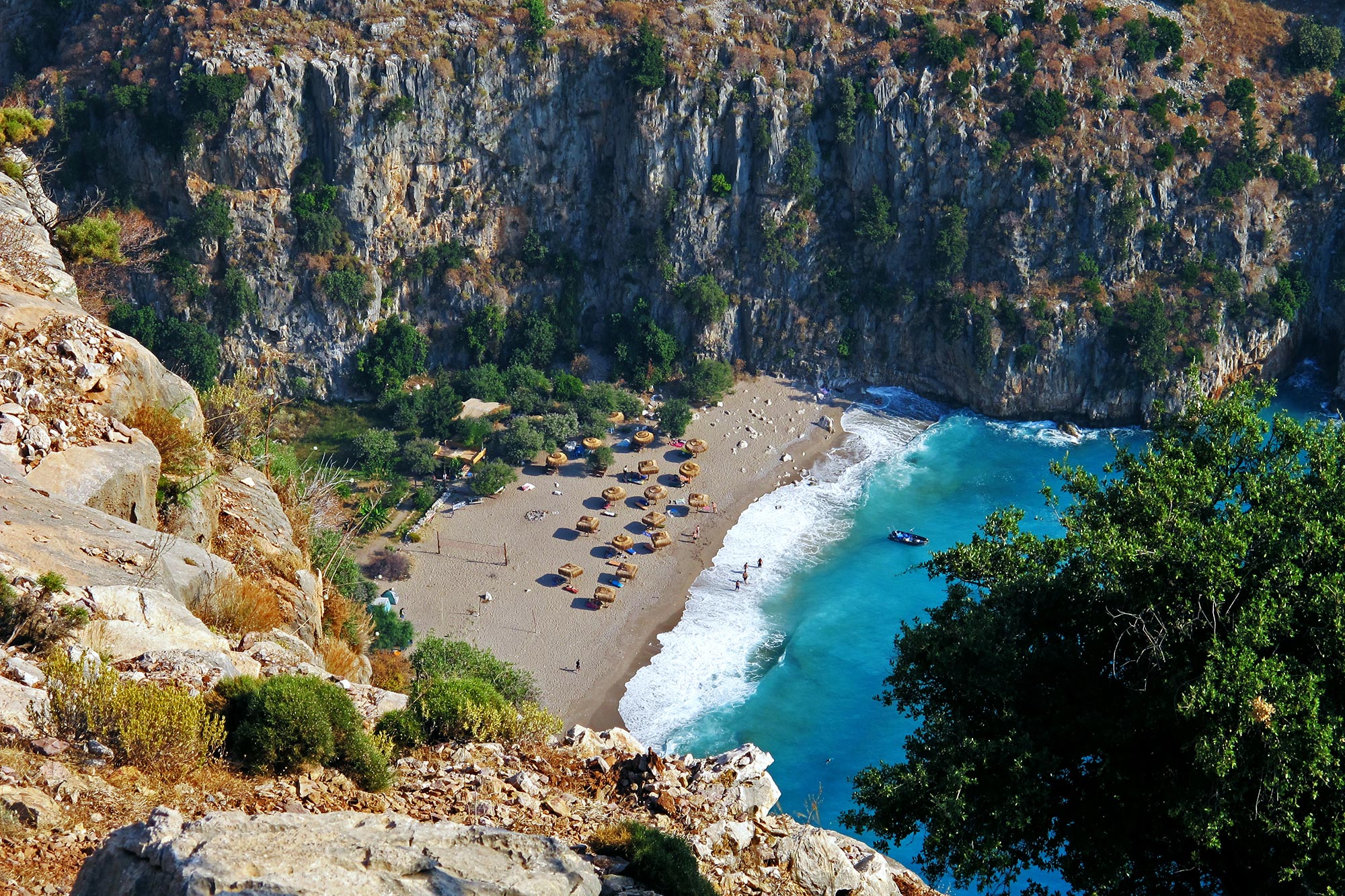 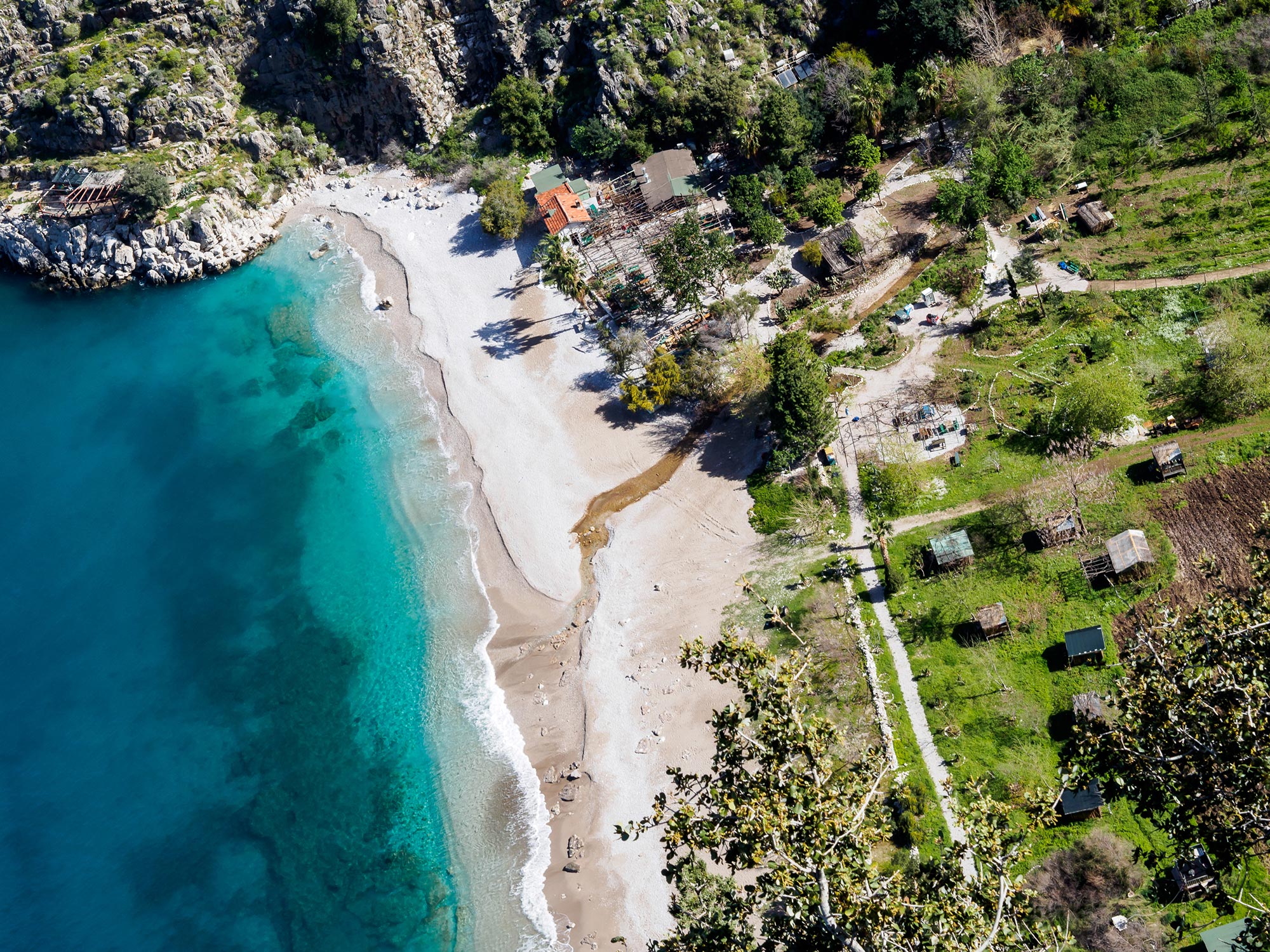 Along the Old Roads

The Lycian Way is hardly the country’s only popular footpath – the country boasts over a dozen official paths across the land. There’s the 500km climb of the St Paul trail, which leads into the Taurus rom the Antalya area. There’s the enormouse 820km Carian Trail, which meanders from the Milas area to the Datça and Bozburun Peninsulas (guiding you toward ancient sites like Lake Baga’s Neolithic cave paintings in the process).

But the Lycian Way remains Turkey’s original and most popular long-distance trail. The route was researched, designed and waymarked by British amateur historian Kate Clow in the late 1990s, who aimed to identify and protect Turkey’s ancient byways. Clow spent years exploring this sublimely beautiful part of Turkey and bringing local hill farmers round to her envisioned trail and the benefits of tourism (pick up her detailed Lycian Way guidebook and hiking maps if you plan on making the trip). I was attracted by the opportunity to mix uncrowded ruins and scenery with seaside holiday towns such as Kalkan and Kaş. Toasting a day’s hike with a seafront beer seemed more appealing than pitching my tent and wondering if I was going to encounter an Anatolian leopard.

The Lycian Way offered the chance to have my baklava and eat it.

In planning my own trip, I’d realized that I wouldn’t be able to do an full month on the trail. Not having a month to walk the full 540km, I decided to get a survey of the trail by walking day-long sections, and covering other sections using dolmuş minibuses. Mediterranean Turkey is well set up for tourism, and I met numerous hikers who had their bags driven to their next stop by an accommodating guesthouse owner. Village entrepreneurs have also opened pensions specifically to provide stopovers to hikers, which can neatly break up the walk between Kaş and Kaleköy. Ultimately, I didn’t use any specialised hiking services. And my choice to experience the trail in small chunks had the added benefit of cutting down on what I’d need to carry with me.

On my first day of leg stretching, I struck out from Fethiye, leaving its energetic Barlar Sokak (‘Bar St’), marinas and Lycian sarcophagi far below as I climbed the hill. I felt like Laurie Lee, the British writer, excitedly setting off for Spain in As I Walked Out One Midsummer Morning, except it was a sunny spring morning, well before summer temperatures make the going too hot. It was an easy start, just 5km on forest tracks to somewhere I had long wanted to visit – partly thanks to another book.

Over the hill was the ghost town of Levissi, the ruins of an old Greek settlement abandoned in the 1920s that shares a green valley with modern Kayaköy. Kayaköy’s lanes snake between vineyards and orchards to tumbledown houses, village cafes and pensions. It was magical to overnight here and see Levissi’s spot-lit churches standing sentinel over Kayaköy.

My next segment brought me from Ovacık, across the front of Baba Dağ (Father Mountain; 1960m) to Faralya, the village above Butterfly Valley.

The legendary Butterfly Valley, its sheer cliffs plunging to a golden beach backed by a simple campsite, is named after its population of colourful Jersey tiger-moths. I caught a dolmuş around the thrilling corners of the coast road from Ӧlüdeniz, stopping in Faralya for a lunch of cheese and spinach gözleme pancakes, the classic Lycian Way hiker’s fuel. At the end of the road in the quirky resort town of Kabak, I followed the rocky track down to the beach – the only ways in and out are either by foot or a high-clearance local vehicle – where the village’s traditional industries of farming and beekeeping have been supplemented by a karmic cluster of back-to-nature retreats.

I spent the night at a stylish lodge there in the valley, where rustic cabins dot the slope and Vinyasa flow yoga took place on a forest platform. Sinking a sundowner in the terrace restaurant, with its dangling lanterns, sea views and cool international crowd relaxing to chilled tunes, this section of the long-distance hike didn’t feel like a hardship. 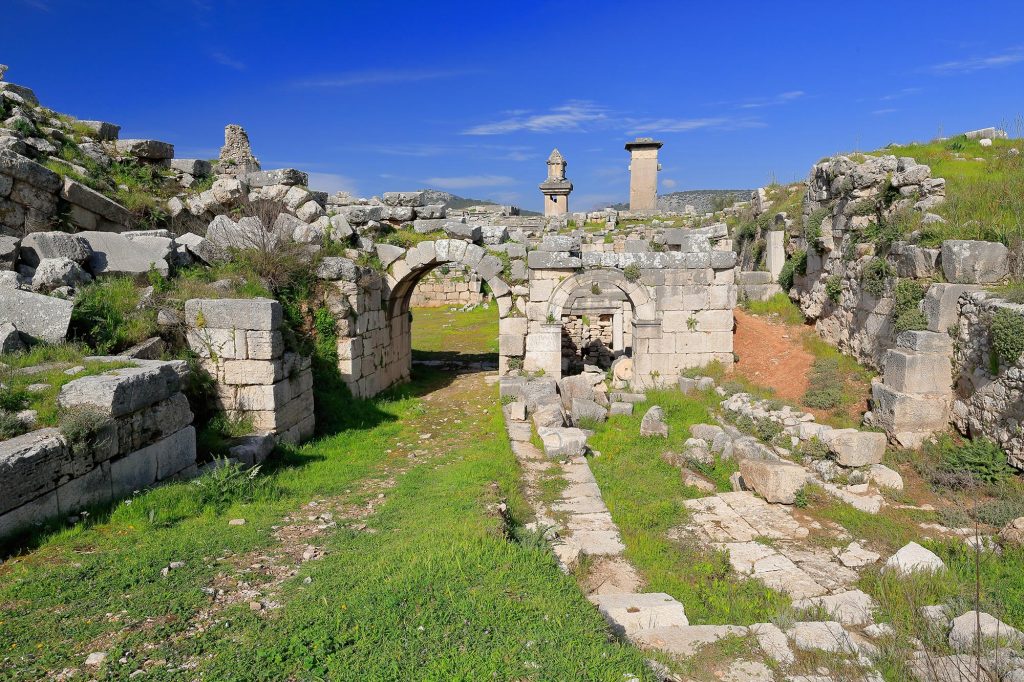 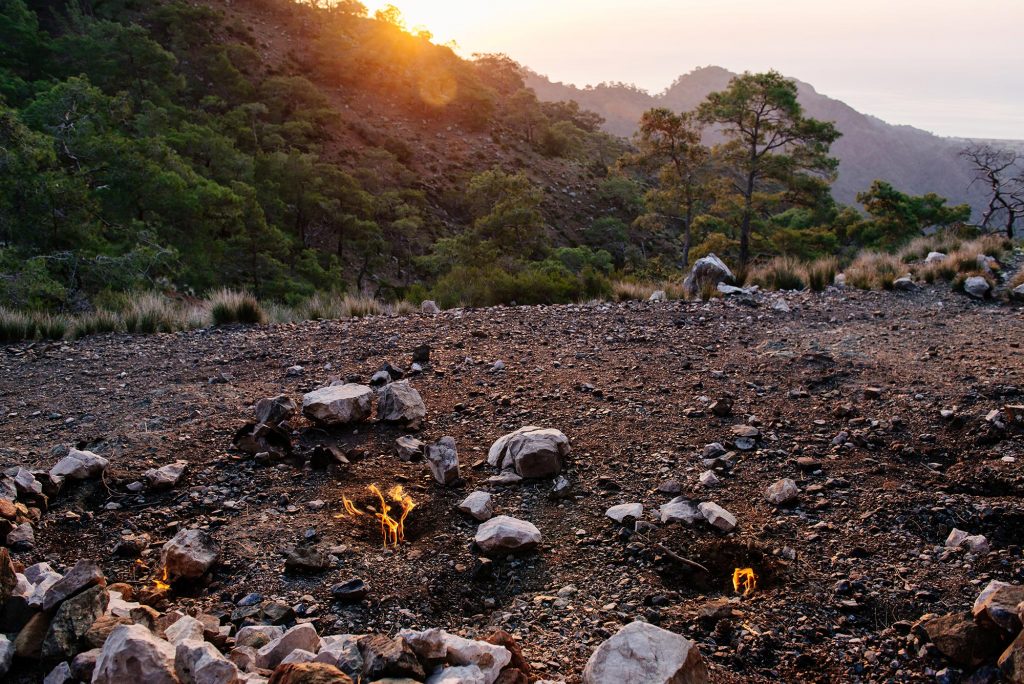 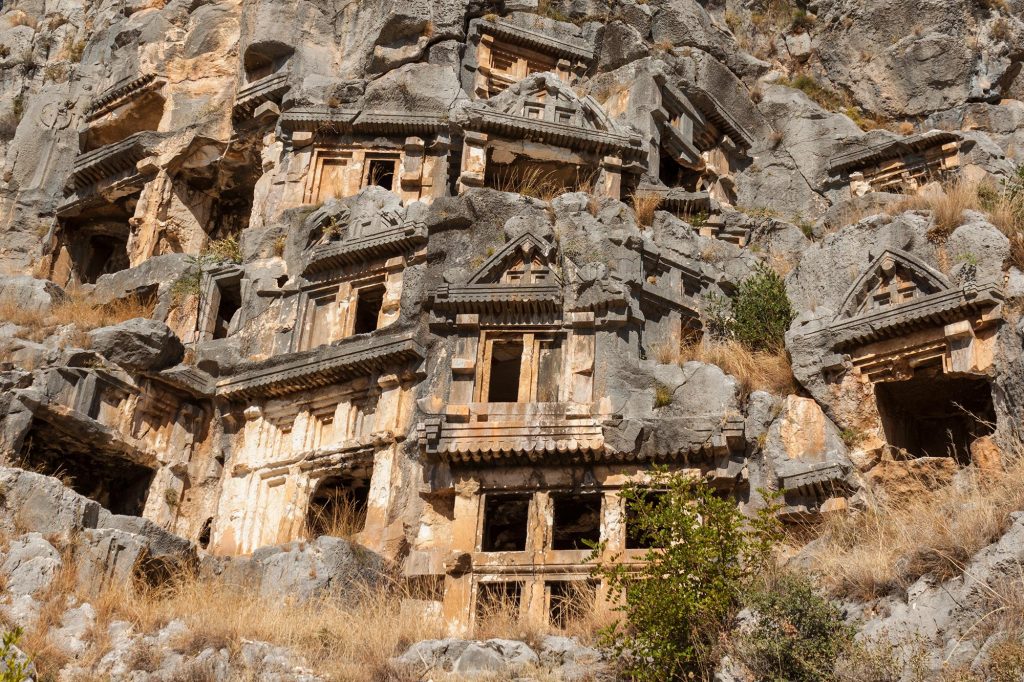 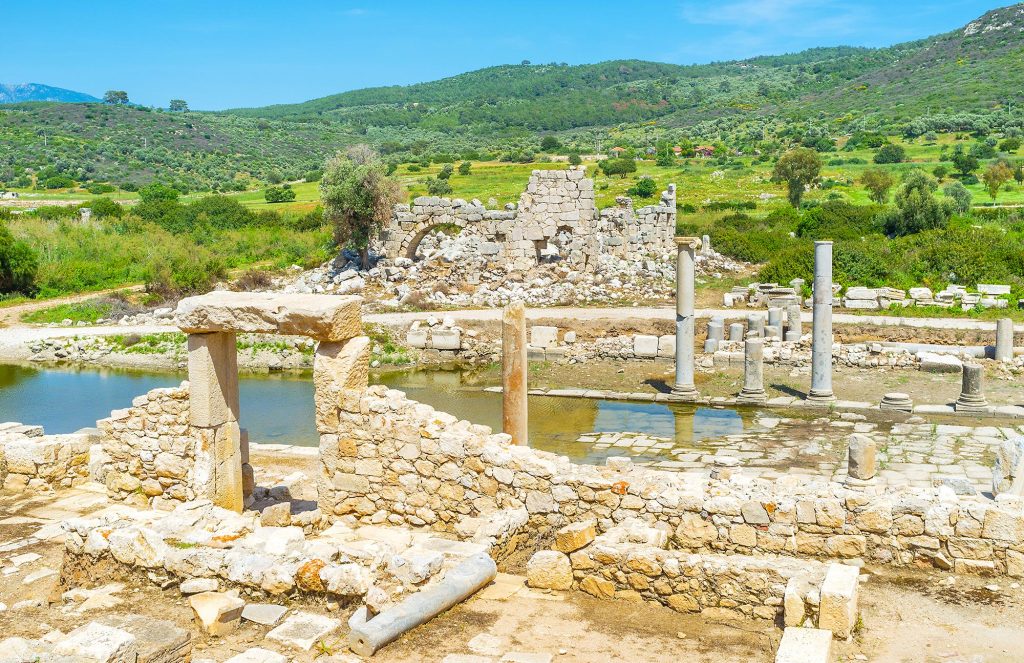 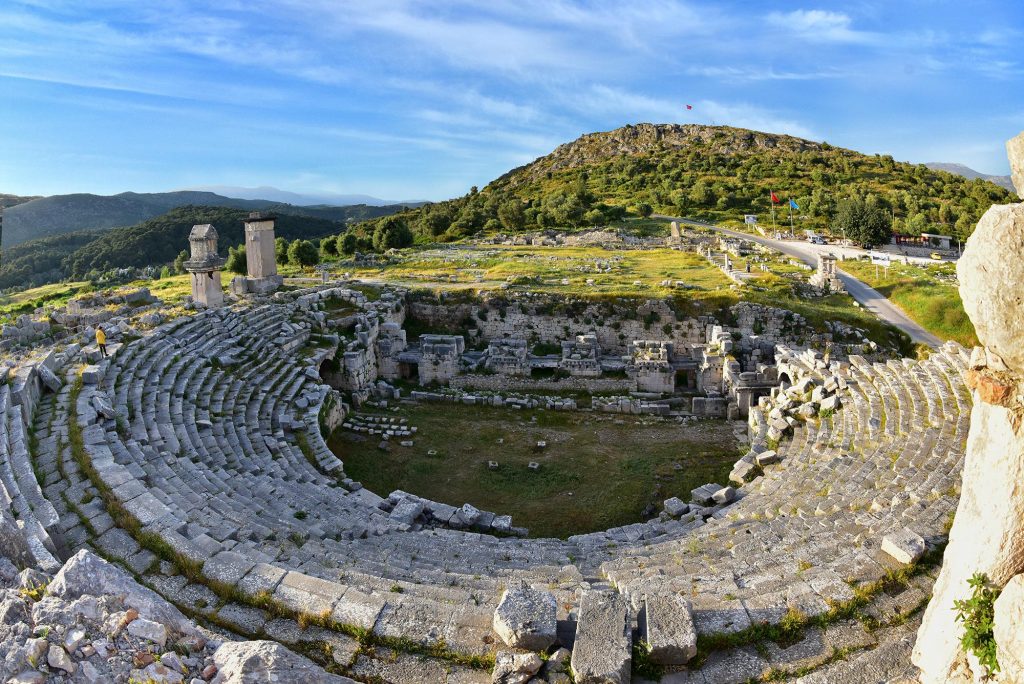 Ruins at Xantos © Gülcan Aca / Ministry of Culture and Tourism

From Kabak, the trail continues through several of the key remnants of the Lycian League, a loose confederation of some 25 city states formed around 165 BC. There’s Letoon, a religious sanctuary dedicated to Zeus’ lover Leto, the national deity of Lycia; and the grand Roman theatre and pillar tombs at Xanthos, the Lycian capital until Brutus attacked in 42 BC and the inhabitants committed mass suicide. The next place I lingered was Patara, where a meadow strewn with Lycian ruins, from a 5000-seat theatre to a colonnaded street, leads to Turkey’s longest interrupted beach (18km). The Lycian League debated public issues in Patara’s bouleuterion, or council chamber, the heart of this politically advanced society; recently renovated, the structure was an atmospheric spot to watch the sun go down and reflect on these enigmatic people first mentioned in Homer’s Iliad.

While staying at a pension in neighbouring Gelemiş village, I enjoyed some of the hospitality for which Turkey is justly famous. The pension’s owner guided me to an excellent viewpoint on the dunes overlooking the ruins, where we had a bird’s-eye view of the ancient harbour, now a reedy wetland. Patara was Lycia’s major port, as well as the 3rd-century birthplace of St Nicholas, the Byzantine bishop also known as Santa Claus. Over a delicious home-cooked feast later that night, I chatted to a German couple walking sections of the trail; it was May so it was a great time to see the Mediterranean tourist hotspots with smaller crowds than peak season, but the Lycian Way was bustling with hiking boots and boisterous camaraderie.

The following days yielded many sweet memories. Hiking into the hills from chichi Kalkan, with its atmospheric terrace restaurants, to the mountain village of Bezirgan, a world away from the coastal hubbub with its stone cottages and grain stores among the fields. Staying in a wooden cabin in Olympos, famous for its ‘tree house’ camps, and walking by night to the Chimaera – a cluster of naturally occurring mountainside flames, attributed by the Lycians to the breath of a terrible monster. But my fondest memory was the 4km walk between the tiny fishing villages of Üçağız and Kaleköy, the latter reached only by foot or boat, and named after the Byzantine kale (castle) overlooking its handful of houses.

I followed the coastal path, overlooking a cerulean bay broken by the undulating outlines of islands and peninsulas, to a boat-building yard, where wooden gület yachts were under repair for the coming summer. Climbing a rocky footpath towards the castle, I emerged on a ridge studded with towering Lycian house tombs, with more emerging from the shallows of the bay below. Later that day, a local fisherman ferried me out into the bay to see the ruined Lycian city of Simena, submerged by earthquakes two millennia ago and known as the Batık Şehir (Sunken City).

Here at the Sunken City, my journey came to end. The smashed amphorae, building foundations and staircases disappearing into the blue depths exemplified the Lycian Way’s extraordinary combination of wild Mediterranean landscapes and spellbinding ancient history. And while so much of the past has disappeared, this path offer countless ways those elements that still peek through.

END_OF_DOCUMENT_TOKEN_TO_BE_REPLACED 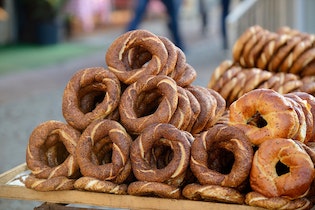