Travel and reading both allow people to explore the world around them – and a number of literary Airbnb listings bring together these two passions in the best way possible. Saturday marks World Book Day, so why not get a little inspiration for a bookish vacation?

Travellers heading to California can soak up the sun and literary history while staying at the former studio of John Steinbeck, who immortalized the state’s Salinas Valley is his books, including the generation-spanning novel East of Eden. John Steinbeck’s Writer’s Studio in located in the coastal city of Pacific Grove and features an outdoor sitting area and peeks of the ocean, according to the hosts.

The listing says that the studio belonged to the writer in the early 1940s. He used it as a writing studio and “worked on his novels, including The Sea of Cortez while living here”. The hosts note that the property has been renovated to pay homage to its history and the period and is sure to make for a cozy stay for any book lover.

A couple of states over in New Mexico, an amazing cabin has twice the literary credentials – both Aldous Huxley and D. H. Lawrence wrote there at one time, according to the listing.

But the Huxley Cabin is more than a literary get away for fans of the influential writers; it is also located on the Taos Goji Eco Retreat and organic goji berry farm in the Sangre de Cristo Mountains, making it a real getaway to the countryside. It may also be a good spot for aspiring writers to concentrate or for anyone in need of a technology break; according to the listing, cell phone connection can be spotty due to its location.

Building where Francisco de Quevedo lived and where the tomb of Miguel de Cervantes is found in front of the entrance. Image by Airbnb

For travellers in Europe, another home boasts multiple bookish connections. An apartment in city centre in Madrid is found in a historic building where 17th century Spanish poet Francisco de Quevedo "lived and wrote many of his masterpieces".

Building where Francisco de Quevedo lived and where the tomb of Miguel de Cervantes is found in front of the entrance. Image by Airbnb

Not only that, in front of the entrance, visitors will find the tomb of Spain’s most famous writer Miguel de Cervantes – author of Don Quixote – in the Trinitarians' Convent. Guests won't have to go far to get close to the country's literary giants.

A dwelling inside the St. Pancras Clock Tower as seen from a room 12 metres up. Image by Airbnb

While not the home of a famous writer, another Airbnb listing has some definite literary cred. The St. Pancras Clock Tower in London is available for a stay, placing its guests just across the street from the British Library, where travellers can take in the second largest library in the world by collection.

Staircase and reference library in the St. Pancras Clock Tower. Image by Airbnb

The clock tower has another appealing attribute, it has views of King’s Cross Station – meaning Harry Potter fans will be sleeping a stone’s throw from Station 9 ¾. The host does warn that the railway may cause a bit of noise, but you can just imagine it’s the sound of the Hogwarts Express rolling past.

The Open Book in Wigtown, Scotland Image by Airbnb

If you’re less interested in living like a famous author and more inclined to spend your time rummaging through a bookstore, you’re still in luck. An Airbnb in Scotland let you run a bookshop during your stay. The Open Book in Wigtown, Scotland’s National Book Town, is located on the seaside in the south west.

The Open Book is in Wigtown, Scotland's National Book Town Image by Airbnb

The Open Book allows guests to take over the shop and stay in the apartment above. Beyond playing shop keeper, you can also explore the town, which boasts 10 bookshops and about 1,000 people, meaning you’ll likely find something amazing to read as well as making some new friends. 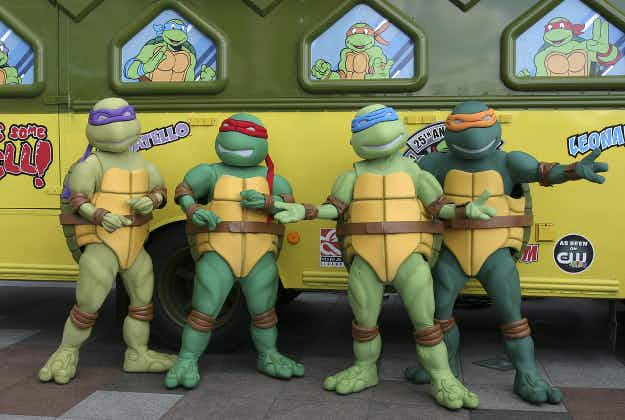 Teenage Mutant Ninja Turtles to act as tourist ambassadors for…