No lie, this is a cool museum. Located in the South Korean capital of Seoul, Pino Familia is a series of three buildings that house a collection of Pinocchio dolls and other treasures from the children’s tale based on a dishonest wooden puppet who aspires to become a real boy.

The buildings are situated around a courtyard peppered with giant dolls. Image by Namgoong Sun/Arch Daily

Designed by South Korean architect Moon Hoon, each of the three structures has a metal exterior, curvilinear shape and unique identity representing a motif from the book. Wave and Whale houses the client’s collection of Pinocchio dolls, Whale Tale contains objects representing the story’s other characters, and, with an oblong shape and protruding “nose” that spouts water, the Nose Fountain features a cafeteria, gift shop, and auditorium.

“The main doll gallery was inspired by the wave, so it has an abstract curve form, while the whale which swallowed Pinocchio and his creator inspired a very figurative form and space trying to mimic inside the whale experience,” Moon Hoon tells Lonely Planet. “The museum shop piece looks like a face of Pinocchio, has a large nose with running water. Obviously, the wave and the whale from the story was an important factor.”

The protruding “nose” on the building spouts water. Image by Namgoong Sun/Arch Daily

With past projects that include a holiday home on South Korea’s Jeju Island featuring a copper observation pod representing the head of a woman with windswept hair, and two adjacent buildings near Seoul with concave moons on the facade, Moon Hoon has a history of designing innovative, boundary-pushing structures. Pino Familia is no exception.

The whale which swallowed Pinocchio is inspiration for the interior of the space. Image by Namgoong Sun/Arch Daily

“The project provided an opportunity to work with a very well known story and new forms associated with it,” says the architect. “I think it is our first three-dimensional curvature project - everything is made up of curves. So it was exciting to sculpt the forms to create a new kind of form and spatial experience. The building process was also very exciting in that carpenters came up with scaffolding solutions that looked beautiful and functional.”

Everything in the build is made up of curves. Image by Namgoong Sun/Arch Daily

The buildings are situated around a quiet courtyard peppered with giant dolls. Both the comprehensive Pinocchio collection and fantastical architecture offer visitors a whimsical adventure reminiscent of the tale itself.

Check out some kitschy hotel art in Miami before it's… 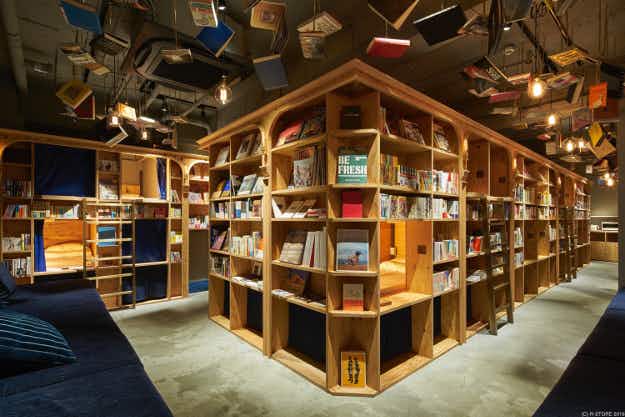 Curl up in a bookshelf and fall asleep at a…