Check out this 24-hour unmanned convenience store in Shanghai

Shanghai has opened a 24-hour unmanned convenience store that will be open every day, year-round, allowing customers to simply scan products that they want to buy with their smartphones.

Introduced by Swedish startup Wheelys, who created a range of organic bicycle cafés in 2014 which allowed people all over the world to create their own businesses, the 24-hour unmanned convenience store will also take the form of a franchise for prospective owners in the future. The system has been described as a physical store in an app, with customers using their smartphones to get access, purchase and pay. The experience allows customers to skip lines for checkouts, with users being charged on a pre-registered card and sent receipts. The store offers ready-to-eat breakfasts, lunches, dinners and snack options made fresh every day by on-site chefs, local kitchens and bakeries, while grocery essentials such as bread and milk, and artisan cheeses and chocolates, are also available.

Wheelys made a splash in 2014 by introducing franchised organic coffee carts. Image by Wheelys

The company has been running several test stores across Sweden, with the first store in China opening recently and holding 500 square feet of retail space. The store automatically opens the doors to registered users, greeting them upon entering the store and closing the doors behind them for security.

While Amazon announced recently that it plans to open a robot-run convenience store called Amazon Go, Wheelys has managed to beat it to the punch with it’s 24-hour unmanned offering. More information on the store and Wheelys coffee bicycles is available on the official website. 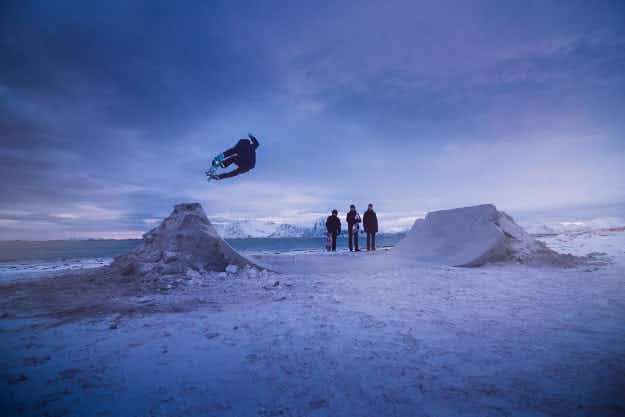 Watch these skateboarders ride on a frozen beach in Norway…