Take your travel inspiration from these Emmy nominated drama series

The nominations for the 68th annual Emmy Awards are out – and the seven shows vying for the Outstanding Drama Series award may have a lot of people debating a weekend binge-watch.

Games of Thrones. Image by HBO

The shows can take viewers around the world and even into fantasy realms – all while sitting in front of the TV. But if you’d rather get off the couch and see it all with your own eyes, here’s some travel inspiration from the worlds of Game of Thrones, Downton Abbey, House of Cards and more.

On the surface the Jennings may seem like any other family living in 1980s Washington, but Elizabeth (Keri Russell) and Philip (Matthew Rhys) are actually two KGB officers from the Soviet Union. Their lives of deception – complete with a lot of disguises and extremely 80s wigs –  are quite in line with the deceptive tricks used to give the show its setting. It’s actually filmed in New York City, not the US capital. Manhattan is used to stand in for DC city blocks and parts of the show are shot in other neighbourhoods like Staten Island and Brooklyn. New York is working overtime on the set of the Americans, even serving Germany in an episode when Elizabeth travels to Europe in order to visit her mother.

Just like Breaking Bad – the show it spun off from – Better Call Saul has travellers from around the world dreaming of a trip to Albuquerque, New Mexico. The American series, which airs on AMC, follows lawyer Jimmy McGill/Saul Goodman (Bob Odenkirk) before he teamed up with decent-guy-turned-ruthless-criminal Walter White. Breaking Bad ran from 2008 to 2013 and Better Call Saul started in 2015, but the interest in the area that was spawned by both shows continues. Albuquerque’s beautiful desert landscape and nearby Sandia Mountains give the shows their atmosphere, and local tour companies have even added theme tours to their offerings, including a Breaking Bad RV Tour that takes people to 17 of Breaking Bad’s most popular sites, including Saul’s office, Walt’s house and more.

While Downtown Abbey wrapped up in the UK in 2015, the ITV period drama continues to delight fans around the world. Set in England between 1912 and 1925, the series follows the highs and lows of the well-to-do Crawley family and their domestic help at a (fictional) Yorkshire estate. The opulent home is actually the Highclere Castle, located in the Cotswolds village of Bampton. Naturally, fans can take a Downtown Abbey-themed tour that leads them around the grounds and into the estate’s lavish rooms, learning not only more about the show and its characters, but the real-life people who called it home. The tour will also take visitors to Bampton, which serves as the show’s Downton village.

While it may seem impossible to visit places like Winterfell or King’s Landing, it's actually pretty simple – if you're not expecting to see dragons. Most of the show is filmed in Europe and North Africa, including Iceland, Northern Ireland, Spain, Croatia, Morocco and more. A Game of Thrones fan could spend weeks travelling around Europe seeing the fantasy show’s real-life counterparts. Iceland’s beautiful and rugged landscape is heavily featured in scenes that take place near and north of The Wall, while Dubrovnik has served as a double for the capital of King’s Landing since 2011. Northern Ireland is the perfect destination for a fan of the Stark family, as it is where you can find their home of Winterfell.

The Showtime drama Homeland features a struggling CIA officer as she deals with the threat of terrorism. In the show’s earlier seasons, Carrie Mathison (Claire Danes) travels around the world to places like Iraq, Lebanon, Afghanistan, trying to protect the US while dealing with bipolar disorder. But, in recent seasons, Carrie has left the CIA and is living in Berlin, and later, in New York. The show’s filming schedule is just as jet-setting as the characters. Charlotte, North Carolina stands in for the location of the CIA headquarters in Langley, Virginia and also for Washington, DC. The show has also been filmed in Israel, Puerto Rico and Morocco.

Naturally, travellers enthralled by the dark world of politics portrayed in House of Cards should book a trip to Washington DC, but that’s not actually where the show is filmed. If you want to get right to the heart of where cunning politician Frank Underwood and his partner(in-crime) Claire scheme, it’s time to look towards Baltimore, Maryland. The lives of the potential president and vice-president are actually filmed in a town called Joppa, despite some Washington footage dispersed throughout. And while super fans may enjoy checking out some familiar exteriors, some of the luxurious interiors are actually shot inside an industrial warehouse, while the inside of the Capitol building is actually Maryland’s state house.

The tale of a troubled computer hacker struggling with his mental health and his involvement in an elusive hacktivist group takes place in a top destination for travellers – New York City. The show follows the life of Elliot Alderson, who works for a cyber security firm by day and hacks the people around him by night. It is in the most New York of settings – the subway – that he first meets the elusive Mr. Robot, who leads him down the rabbit hole and into a double-life. While New York provides the perfect backdrop for a socially anxious computer expert trying to get through the day, one of the most visually stunning scenes is something most visitors to New York will never see – a complete empty Times Square. While the scene is brought on by Eliot's delusions, it does give a nice idea of how the crossroads of the world would look without all the chaos.

The Emmy Awards will be held at the Microsoft Theatre in LA on Sunday, 18 September.

Take a look at the most expensive luxury suites in… 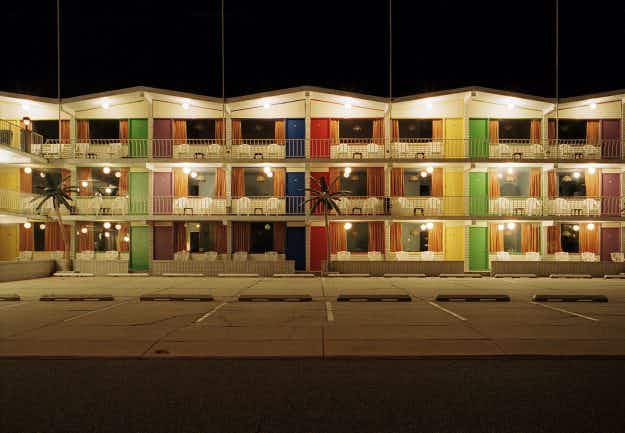 See the abandoned motels of New Jersey that have remained…