The thought of travelling around Australia would seem like a dream to many, but for this one guy it would seem the experience was anything but. Imgur user Boedith – whose real name Lars Fevang – shared a series of photos from his solo trip Down Under where he visited all the top tourist spots to die for – including Sydney and Melbourne, and spots along the coast from Brisbane to Cairns. Although judging by his face, the 29-year-old didn’t have the greatest of times.

“Bondi Beach in Sydney, not at all like on TV.”

“Heard the Great Ocean Road was amazing, was just some stupid rocks.”

“Thought the zoo would cheer me up. Turns out Steve Irwin is dead.”

“Went to see the most famous ship in Queensland. It can’t even sail…”

“So I got out of there. Australia sucks.”

Lars, from Toensberg in Norway, made the six-week trip to Australia after spending “six years in a military uniform” and needing some time to unwind. And unwind he did – don’t let the photos fool you. The traveller admitted he, in fact, had an awesome time away and enjoyed every minute of it.

“I took those selfies and sent back to my friends in Norway while I was travelling,” he said. “They were quite jealous of my trip, so I tried to convince them that they were not missing out on anything. They didn’t buy it and became more jealous every time I sent them a new selfie, so I kept doing it. It was only last week, when I was looking through some photos on my laptop, that I thought of posting them on Imgur.”

He says he never thought the pictures would go viral, but reckons the people who find them funny get his sarcastic humour. “And maybe we have seen enough perfect smiling selfies from people in front of famous tourist spots,” added Fevang. “Let’s get grumpy.”

Make a splash at this new underwater restaurant in Brussels… 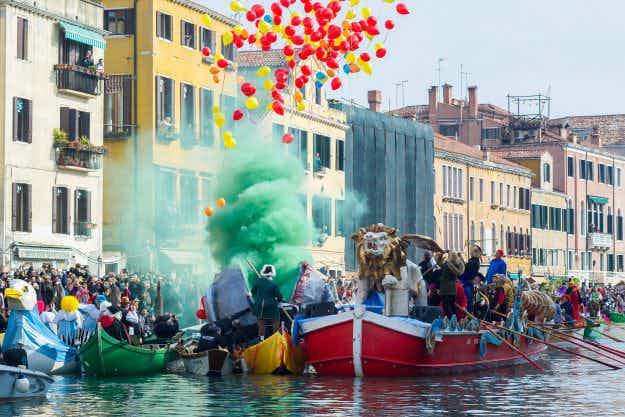 This year’s stunning Venice Carnival launches with a colourful water…