Stockholm to Helsinki in 30 minutes? Hyperloop One could make it happen

Travelling between Stockholm and Helsinki could someday take as little as 30 minutes if a proposed Hyperloop transport system is built between the cities.

Rendering of passengers boarding a Hyperloop. Image by Hyperloop One

The cities are a roughly one hour flight apart, and heading overland requires cars, ferries and more than 10 hours of your time – while the futuristic form of transport would reduce the trip to less than an hour.

Hyperloop is a concept created by Tesla founder Elon Musk that would transport vehicles through a tube at high speeds by creating a near-vacuum and using magnetic levitation to allow trains to float above the track to reduce friction.

Sweden, Stockholm, View to Gamla Stan with German Church in the evening light. Image by Westend61

Now, Hyperloop One, a company working to develop the technology has released a “pre- feasibility report” on the Nordic train. The 500-kilometre tube system would see “an entire region of 5 million people … become a metro network, lifting property values and productivity along the route”, according to a company statement.

The report was released by Hyperloop One, accounting firm KPMG and FS links, a “multi-stakeholder consortium formed to bring the Hyperloop to the Nordic region”. Now, the group will begin a full study of the project in order to secure funding and get the approval to create a test section.

The project is estimated to cost €19 billion, but the company notes that it would “slash transit time”, increase property values and “unlock new travel demand by creating a super-metro area”. By factoring in ticket sales – which would cost an average of €25 – and the economic spinoff, Hyperloop One believes it would be generating a surplus within 10 years.

The company says that if the project gets funding and clears any regulatory hurdles, the domestic sections could be created in about 8 years and the international link could be in place four years after that. The domestic sections are viable projects on their own, according to the company, and could cut down transportation from the airports to city centres in 10 minutes. 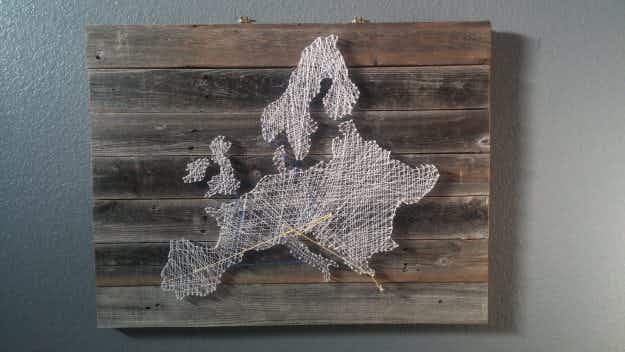 Couple create stunning string and nail map of Europe to…