The image of an excited grey langur monkey swinging from the tails of its friends has scooped the public's choice from the Wildlife Photographer of the Year award.

Photo issued by the Natural History Museum of "A mother's courage" by Linc Gasking showing a mother Adelie penguin protecting a group of chicks from a southern giant petrel which featured in the final the Wildlife Photographer of the Year People's Choice Award. Image by Linc Gasking/PA Wire

The picture, taken by amateur photographer Thomas Vijayan, won the national contest's people's choice award after attracting more than half of the public vote.

Although his favourite subjects are usually big cats, Mr Vijayan, from Canada, said he could not resist the opportunity to take the snap at the end of a day's safari in the Bandipur National Park in Karnataka, south west India. 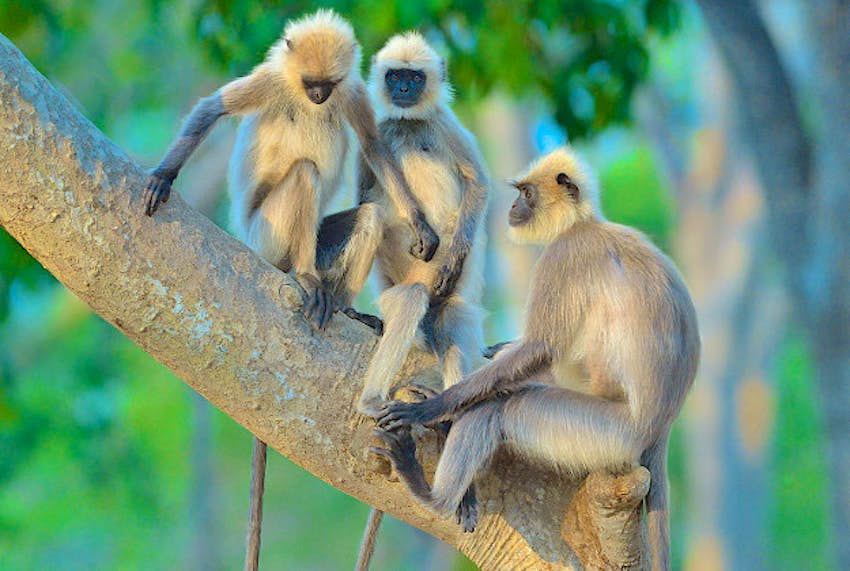 Two takes of the photo issued by the Natural History Museum of "A swinging time" by Thomas Vijayan from India showing grey langurs playing in Bandipur National Park, Karnataka, India which is the winner of the Wildlife Photographer of the Year People's Choice Award. Image by Thomas Vijayan/PA Wire

He said: "I saw a few langurs playing on a tree, and it struck me that there was a chance for a good photograph. While everyone else was waiting for the tigers, I came back with this mesmerising moment."

A healthcare professional by trade, Mr Vijayan was born in Kerala and grew up in Bangalore before moving to Canada. His website, thomasvijayan.com, shares photos from his various expeditions photographing a range of big cats and exotic birds in the wild.

Photo issued by the Natural History Museum of "Warrior of the grassland", by Anup Deodhar from India, showing a fan-throated lizard, which featured in the final the Wildlife Photographer of the Year People's Choice Award. Image by Anup Deodhar/PA Wire

Titled A Swinging Time, his award-winning image was one of 42,000 competition entries from almost 100 countries. Only 25 were short-listed and almost 20,000 nature photography lovers voted for the award.

photo issued by the Natural History Museum of "Berries for the fieldfares". Image by Joel Brunet/PA Wire

The full Wildlife Photographer of the Year exhibition, showcasing a portfolio of 100 selected entries is open at London's Natural History Museum until April 10. Entry to the 2016 competition is now open and can be applied for at: wildlifephotographeroftheyear.com.

Cheap and cheerful Charleston: the best free things to do Chucktown

10 incredible hotel room views to bookmark for your dream trip

9 min read • Published about 5 hours ago

8 min read • Published about 7 hours ago