Visitors to Dublin, Ireland, are currently enjoying a 24-hour charity street performance from the internationally-renowned Irish dance troupe Riverdance and Irish dance schools from around the country.

Since noon yesterday, dancers kicked off a 24-hour 'danceathon' on the plaza outside the Gaiety Theatre in the heart of the Irish capital, to raise funds and awareness for the Irish Hospice Foundation, a national charity dedicated to all matters relating to dying, death and bereavement in Ireland.

Riverdance are now hosting a 24 hour #danceathon in aid of the Irish Hospice Foundation Please support by texting IHF to 50300 to donate €4 or donate online at www.idonate.ie/Riverdance-danceathon
Now on at The Gaiety Theatre. #Dublin

As a large digital clock hanging from the theatre's canopy counts down the hours, Riverdancers and fellow Irish dancers will ensure that the dance goes on for 24 hours, and are inviting passers-by to donate to the charity and maybe even join in and to follow the event as it unfolds on social media.

The worldwide phenomenon of Riverdance began its journey as the interval act in the 1994 Eurovision Song Contest. There was such a massive reaction worldwide to the electrifying and innovative seven-minute dance piece, it was developed into a full-length stage show by producer Moya Doherty, composer Bill Whelan and director John McColgan.

Special performance of Trading Taps!
Riverdance are now hosting a 24 hour #danceathon in aid of the Irish Hospice Foundation Please support by texting IHF to 50300 to donate €4 or donate online at www.idonate.ie/Riverdance-danceathon

With its fusion of Irish and international music and dance, the show broke all box office records during its world première run in Dublin, and it has continued to set new records in packed theatres and arenas throughout the world. Since 1995, Riverdance has played 11,000 performances and has been seen by over 25 million people in over 467 venues worldwide in 46 countries across six continents. Three million copies of the Grammy award-winning CD and 10 million Riverdance videos and DVDs have been sold. The show is currently celebrating its 21st birthday this summer in Dublin.

Highlights of the danceathon today include the Riverdance morning workout, where the public are encouraged to join the Riverdance dancers for their morning fitness regime from 6-8 am, and at 11 am the troupe will perform numbers from the hit show, which is running at the Gaiety Theatre until 4 September. 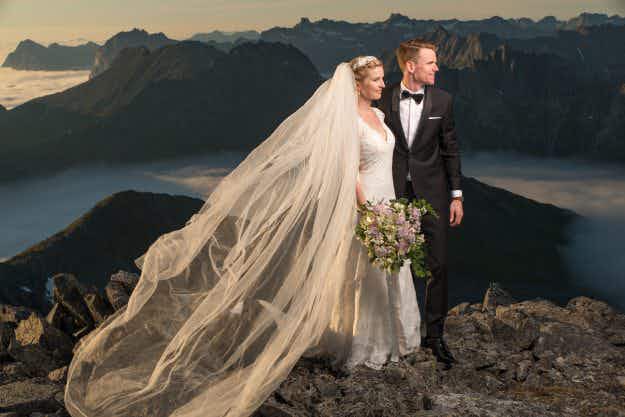 The newlyweds who climbed a mountain to get these stunning…