If your idea of fun is being surrounded by giant, man-eating dinosaurs and other prehistoric creatures then Moab Giants Dinosaur Park could be on your bucket list. With its grand opening this month, this 60-acre dino discovery den has upped the fear factor with its state-of-the art replica life size dinosaurs.

It is best to start the journey at the 3D theatre to find out what the world looked like over 220 million years ago. Visitors can find out what took place between the Big Bang and the emergence of the dinosaurs.

Two replica dinos in the park. Image by: Moab Giants

At one-and-a-half miles long, the Dinosaur Trail has over 130 life-size dinosaurs on display. With the scrubby and surreal Moab desert as the backdrop, the trail wanders through the original habitat of these fearsome creatures. Visitors will see dinosaurs doing what dinosaurs do: eating, fighting, caring for their young and just generally going about their dino business. As Moab is part of the Dinosaur Diamond Scenic Byway, amongst the models in the park there are actual fossils to be found embedded in the rock.

A state of the art replica dino on display in the park. Image by: Moab Giants

Take a few deep breaths before heading to the 5D PaleoAquarium, the only one in the US. Like a scene from 20,000 Leagues Under the Sea, visitors feel like they are immersed underwater with giant sea monsters that swirl and sway around their deep sea vessel.

Moab’s landscape and geology is one-of-a-kind. Image by: Moab Giants

For the real thing, the last stop should be the Tracks Museum. Dinosaur paw prints that have been excavated from around Moab are on display, along with a few other skeletal remains. Moab Giants has on-site scientists who specialize in the field of fossil footprints and one of the things that make the park so unique is that excavations are ongoing.  Moab’s landscape and geology is one-of-a-kind, with it's unique rock and climate, anywhere in the world.

The 60 acre park has over 130 dinosaurs on display. Image by: Moab Giants

The park also has a Dino Playground for the kiddies, a Paleo Camp for those who want to live the dream and two Dig it Out sites.   Tickets range from $12 to $22 based on age and type of ticket purchased (children three and under are free). Moab Giants is closed December and January. 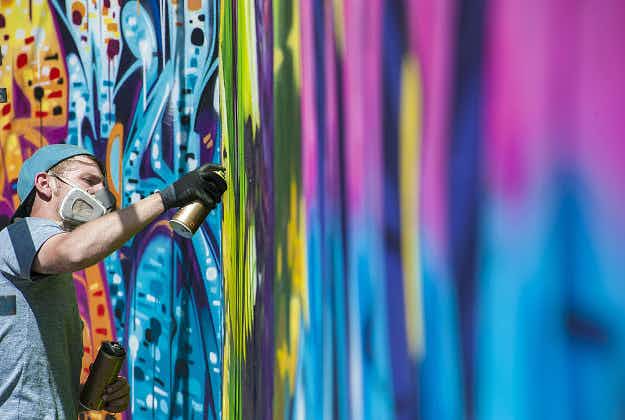 Township street art tourism on the rise in Cape Town…

A 'bring your own cocktail' pop-up bar is opening in…