An ancient god made from syrup cans and a giant ice cream sundae will be the next artworks to go on show on Trafalgar Square’s famous Fourth Plinth. The Daily Telegraph reports that the two exhibits will be displayed at the site in the centre of London in 2018 and 2020.

An art work entitled 'The Invisible Enemy Should Not Exist' by Iraqi American artist Michael Rakowitz is displayed during the announcement of the art works that will be installed on the Fourth Plinth in Trafalgar Square, on March 21, 2017 at the National Gallery in London, England.

The Lamassu, a winged bull or lion with a human head, was a protective deity in Assyrian mythology. The most famous example was almost five metres-tall and guarded the temple of Nineveh, in modern Iraq. Nineveh was once the largest city in the world, but was swallowed up by the modern city of Mosul, and the statue recently suffered damage at the hands of Isis. Artist Michael Rakowitz’s 2018 recreation will be made from empty cans of date syrup, once one of Iraq’s major exports.

An art work entitled 'The End' by British artist Heather Phillipson is displayed during the announcement of the art works that will be installed on the Fourth Plinth. Image by Carl Court/Getty Images

In 2020, the plinth will be occupied by The End, a giant sculpture of a scoop of cream topped by a cherry, a drone and a fly. Artist Heather Phillipson said the sundae was at once “very celebratory” and “on the verge of collapse” and that the cherry stalk would reach into the sky “as something that can speak back to the height of Nelson’s column.”

The drone will not fly, but will have Wi-Fi, allowing people to live-stream the footage from its camera on their phones. The two exhibits are the latest in a series of unusual artworks that have topped the Fourth Plinth, including a giant blue cockerel, a boy on a rocking-horse and a life-size sculpture of Christ. In 2009 the artist Antony Gormley’s exhibit featured 2400 members of the public, who each stood on the plinth for an hour. The plinth currently features a seven-metre-tall sculpture of a thumbs-up by David Shrigley called Really Good .

The first three plinths in Trafalgar Square feature statues of two generals and George IV. The Fourth Plinth was built in 1841 to support a statue of William IV, but was left empty for over 150 years after the project ran out of funds. The plinth has been home to temporary exhibits for most of this century, although a permanent statue is likely to eventually be erected – with many suggesting Elizabeth II be honoured.
Get the top travel news stories delivered straight to your inbox every weekday by signing up to our newsletter.

Study finds travellers to Jerusalem most excited by their first… 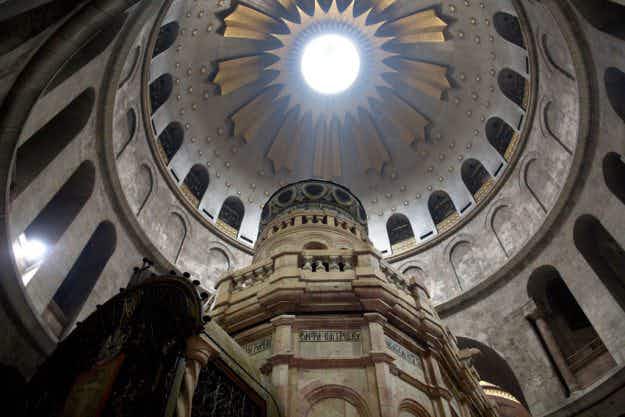 Tomb believed to be Jesus’ final resting place reopens to…