New York’s Metropolitan Museum of Art has added a touch of California Gothic to the Manhattan skyline this summer. The Central Park museum last week inaugurated an artwork on its roof that replicates the façade of the Bates mansion from the 1960 Alfred Hitchcock film Psycho.

'Transitional Object: PsychoBarn’ on the roof of New York's Metropolitan Museum of Art. Image by @designboom

The fourth of what has become an annual event during the warmer months, the 30-foot ‘Transitional Object: PsychoBarn’, by British artist Cornelia Parker, has been raised atop the Iris and B. Gerald Cantor Roof Garden. In architectural terms, ‘PsychoBarn’ is a folly: a structure with the appearance of a real building constructed primarily for decorative purposes. At first glance, it appears to be a three-dimensional building, but on closer inspection the structure reveals itself as a façade – or rather two of them – supported in the rear by scaffolding. Given that the original Bates mansion was also a stage-built façade, Parker’s reconstruction plays on notions of authenticity, artifice and illusion.

The artwork combines three iconic features of Americana. Firstly, it was built using materials from a century-old red rural barn from upstate New York, namely the wooden slats, window frames and corrugated metal roof tiles. Secondly, it has been carefully designed to replicate one of the most sinister buildings in cinema. And finally, the house in the film, whose style Hitchcock dubbed ‘California Gothic’, was in turn inspired by Edward Hopper’s painting, ‘The House by the Railroad’.

Set against the Manhattan skyline, it makes for a heady mix of inferences. “I quite like the idea of the barn being this quite wholesome thing,” says the artist. “And then the Psycho house is the opposite. It's just all the dark psychological stuff you don't really want to look at.”

The installation will be open from 10am to closing daily until 31 October, weather permitting. 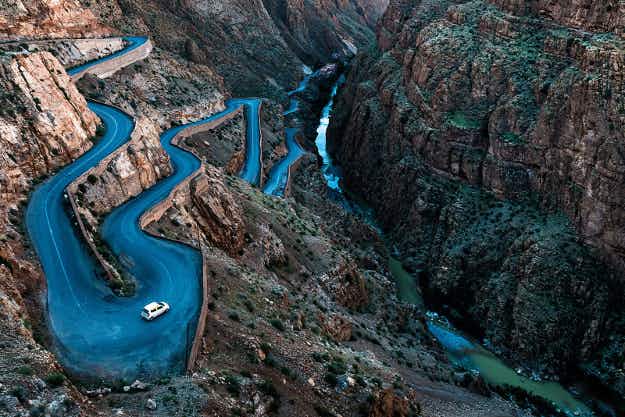 Get inspired by the amazing entries in the National Geographic…

Social media campaign stresses that elephants and rhinos are #WorthMoreAlive…