Nancy Nowacek, the artist behind the “Citizen Bridge”, hopes the 1,400-foot-long bridge will help New Yorkers reconnect with the water around their city and reclaim the waterways as public space. After moving to Red Hook, Nowacek found herself surrounded by water and living close to the Buttermilk Channel. She discovered there once was a walkable sandbar between her neighbourhood and Governors Island, and the inspiration for the bridge sparked. “I was inspired to figure out a way to remake that walk,” Nowacek reveals, “and help others to see the waterways as public space.”

Four years and seven prototypes later, and Citizen Bridge is shaping up to become a reality. Nowacek launched a Kickstarter campaign to help “reclaim a long-lost waterway in the NYC harbor and reconnect with the water”. With just a day left, the bridge is around $2000 away from reaching its funding goal of $25,000.   Working with nearly 200 individuals, mostly volunteers, Nowacek tested six bridge designs to find the best way to cross the Buttermilk Channel’s choppy waters. She worked with architects, civil and marine engineers, and two law firms to create her final design. The Citizens Bridge will consist of blocks of Styrofoam linked together to form the floating foot bridge.

The Buttermilk Channel’s challenging currents haven’t been the only challenges. Since the channel is a navigable waterway used daily by boats, the Citizen Bridge will only pop-up once a year, for one day only. “The Coast Guard has offered a 24-hour window for the project as a way to realize the vision while minimally impacting the vessel traffic on the waterways”, Nowacek explains. If Citizen Bridge reaches its Kickstarter funding goals, Nowacek hopes to launch the bridge for a full day in the summer 2017.

See behind the scenes of the upcoming Walking Dead attraction… 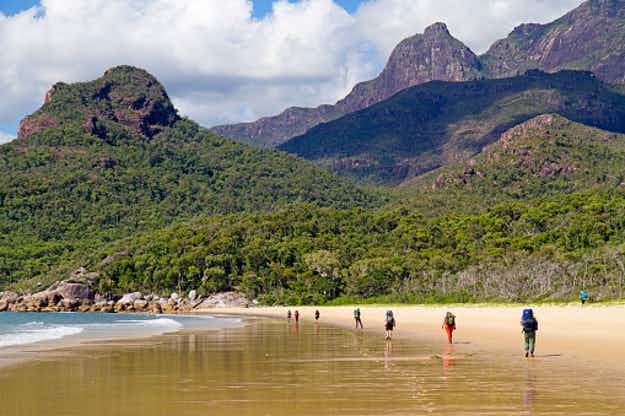 Australia delays plans to implement 'backpacker tax' after concerns about…