Starbucks has announced that they are bringing nitro-coffee to the masses, starting this summer.  The fizzy cold brew will initially be available in stores in Seattle, Portland, New York, Chicago, Boston, and Los Angeles, but will roll out to more than 500 stores by the end of the summer.

Coffee connoisseurs are always looking for the next great flavour innovation, and nitrogen gas is the unlikely source of the latest buzz around the beloved brew. The technique is borrowed from the craft-brewing industry, which has been using nitrogen to provide a rich, velvety finish for lagers, stouts, and ales.

One of the early pioneers of nitrogen-infused coffee was Nate Armbrust, Stumptown Coffee Roasters’ food scientist. He began experimenting with the nitrogen taps tried and tested by craft breweries in early 2013. Armbrust wanted to add creaminess and richness to Stumptown’s cold brew coffee without compromising its delicate, fruity flavor. The small size of the nitrogen bubbles creates an enhanced mouthfeel, making the texture of the drink smoother and silkier, thus enhancing the overall experience of the beverage.

Capitalizing on the popularity of Starbucks’ introduction of its cold brew coffee last year, the addition of nitrogen to this popular drink highlights the growing appetite US consumers have for cold-brew coffee. Starbucks cited a 300% increase in the cold coffee market in the US between 2010 and 2015, and projects that the market will see a 200% increase in the next two years. To watch a video of a coffee getting the nitro treatment, click here.

This month you can follow the yellow brick road through… 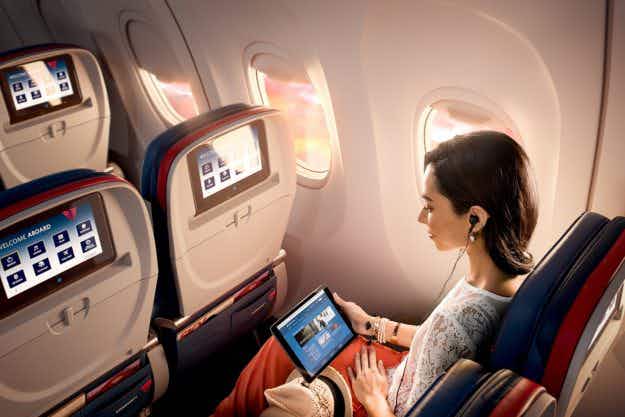 Delta Air Lines will offer all of its in-flight entertainment…