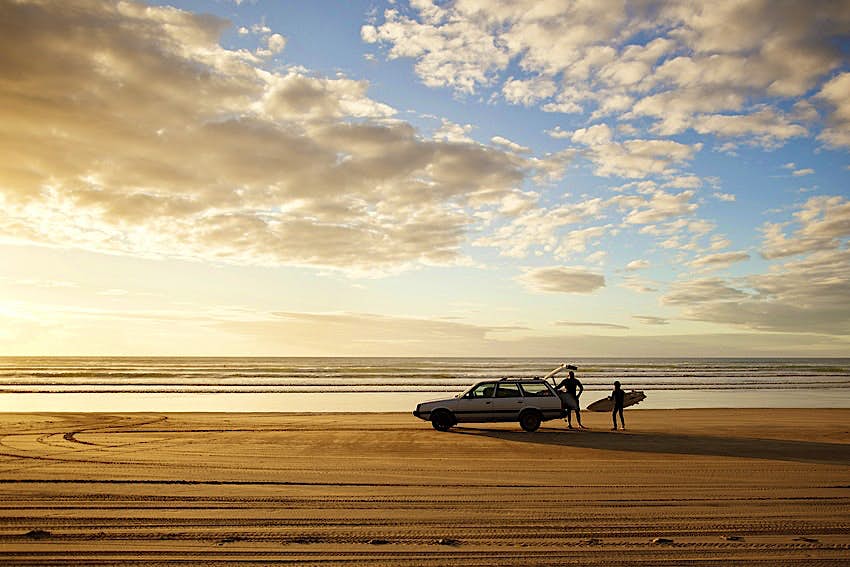 With 15,000 kilometres of coastline, New Zealand is heaven for beach-lovers. Its diverse shores dish up everything from lazy days and blazing sunsets, to active adventures such as swimming, kayaking and surfing. Finding a great beach is easy. Here are 10 unforgettable New Zealand beaches.

It’s a poorly kept secret that Ninety Mile Beach is in fact only 88km, but there’s no way you’ll feel short-changed here. Starting near Kaitaia and ending close to Cape Reinga (Te Rerenga Wairua) – New Zealand’s spiritual northern point – it’s an epic expanse of sand and endless ocean, backed by massive dunes that are guaranteed to put sand in your pants. Just shy of the Cape is Te Paki Stream car park. A walkway from here leads to the beach and northwards to Scott Point.

The popular TV show Piha Rescue follows the heroics of this beach’s busy surf-lifesaving crew. But while Piha is infamous for unruly surf and strong undertows, it well deserves its mantle as Auckland’s most popular seaside playground. Sizzle yourself on its hot black sand, frolic amid foamy white rollers (always swim between the flags), and wander the beach and surrounding walking tracks to better admire the shapely headlands of Lion Rock and Taitomo Island.

Beautiful beaches are 10 a penny on the Coromandel Peninsula, but New Chums stands out for its isolation. It’s actually only half an hour’s walk from Whangapoua car park, but such is the rock-hopping and scampering required that many don’t even attempt it. The reward is a beach so golden, a sea so glittering, pohutukawa trees so gnarled (and resplendent in red blooms around Christmas), that its beauty may bring a tear to your eye. What’s more, you might have it all to yourself.

Sweet and salty little Raglan is waxhead central, with serious surfers heading to Manu Bay, rumoured to have the world’s longest left-hand break. Mere mortals are better off at nearby Ngarunui, where friendlier surf allows for safer swimming, even more so from October to April when the beach is patrolled by lifeguards. It’s a busy and entertaining place on fine, summer days, especially when the grommets of Raglan Surf School are giving this surfing lark a go. Could that be you?

The coastal crescendo of Kahurangi National Park’s multi-day Heaphy Track, this remote beach can also be reached from the northern extremity of the West Coast Road. And what a journey it is: the intensely scenic drive through Karamea to Kohaihai, the end-of-the-line camping reserve in a magnificent estuary setting. From there you can venture into the national park, over a low hill to Scott’s Beach. Likely to be shrouded in a salt mist, the beguiling scene features jagged rocks, nikau palm forest, and powerful waves clawing at the driftwood-strewn beach.

Tucked around the corner, 10km (6.2 mi) from central Christchurch, the bright and breezy seaside suburb of Sumner dishes up a classic day at the beach. It’s a popular spot for locals, who turn up en masse bringing with them an upbeat, holiday vibe. The sandy beach bustles with swimmers and surfers (and lifeguards), while the village’s cafes and restaurants churn out ice cream, coffee and burgers at a rapid rate of knots.

Sixteen kilometres from the nearest town (Owaka, population 300), this is a genuine hidden gem in a super-sleepy corner of The Catlins, Southland. It has few claims to fame, save a small (and CGI) role in The Lion, the Witch and the Wardrobe – totally overshadowed by those volcanoes in The Lord Of The Rings. And hooray for that, because Purakaunui is all about peace and quiet. It’s a lovely beach, framed by high cliffs, with pockets of native bush and a large grassy reserve. There’s blissfully little to do, except swimming when the surf’s off, and surfing when it’s on.

This article was originally published in April 2015 and updated in September 2020.

Enjoy a comfortable layover in Dubai with a free hotel stay

1 min read • Published about 2 hours ago