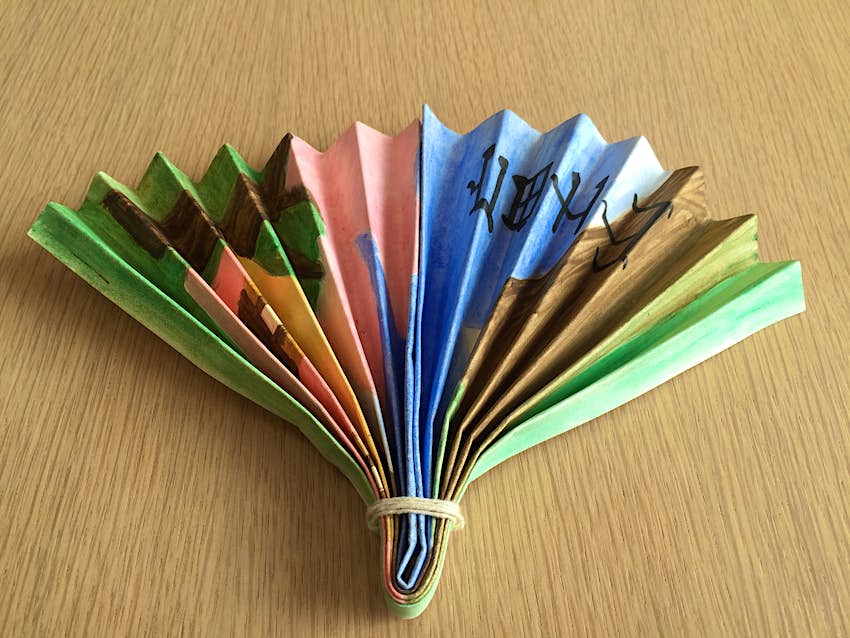 On 22 October every year, the historical city of Kyoto in Japan comes alive to celebrate the festival of Jidai Matsuri. A grand procession features period costumes from ancient Japanese eras dating all the way back to the year 794! People dress in outfits such as military uniforms and kimonos, plus all the accessories that come with traditional dress, such as Japanese fans.

This month at Lonely Planet Kids, we’re celebrating Jidai Matsuri with a step-by-step guide to making your own fan with a painted Japanese scene.

Fold your way to traditional Japanese elegance by following the instructions below, or download and print out the activity sheet!

Gather together your equipment!

Draw your Japanese scene and symbols with pencil. Ours includes a cherry blossom tree, mountains and a Japanese-style house. We’ve used the Japanese symbols for ‘Mount Fuji’ in our example. Ask an adult to help you look online for different symbols to choose from.

Paint your Japanese scene and leave to dry.

Go over the Japanese symbols with marker pen.

Holding the page lengthways, turn the paper over and fold up at the bottom by an inch, then turn it over to the front and make another fold. Keep going until you have a concertina effect.

Pinch the middle of the card together, then fold upwards from the centre so that the two sides meet.

Glue the two separate sides together.

Pinch about an inch of the bottom of the fan and crease the paper here. Then wrap the string around it a few times over and tie in a knot to secure.

Hold your fan here at the base, and wave!

Cheap and cheerful Charleston: the best free things to do Chucktown

10 incredible hotel room views to bookmark for your dream trip

4 min read • Published about 5 hours ago