Trying to bring up her spirits, Taylor Tippett wrote a note and taped it to the window of an airplane. After posting a photo online, the inspiring message has led to a series of similarly positive missives posted from around the world.

Now, the tag shows a series of notes from other people following her example, including posts written on pages torn from books and in different languages.

Tippett doesn’t leave her notes on the window however. After taking a snapshot, she tucks them into the safety cards in front of seats with the hope that someone will see it on their flight.

Taylor Tippett, a flight attendant with American Airlines, has started a series of inspiration notes posted on airplane windows. Image by Taylor Tippett

The Chicago-dweller is based out of Reagan National Airport in Washington, D.C., and told Lonely Planet that she is a huge advocate for pep-talks and encouragement, which is how she often starts her day.

One day, Tippett said she was down and beating herself up, so she started a pep-talk, repeating the phrase “be kind to yourself".

She was sitting in the back of the plane, doodling in a notepad. She hung the piece of paper with the phrase on the window “and decided I wanted to let other people know what was going on and encourage them as well”.

She said she wanted to show people they are not alone and lift them up through words.

“I want people to feel loved, heard, and cared for.”

It started as a personal photo series and a hashtag, but Tippett says more than 300 people have now contributed, which is “honestly incredible”. Tippett has more than 121,000 followers on Instagram. While it’s a personal project, her employer also recently found out and Tippett said they adore it.

Tippett loves to travel for work and pleasure, though she added that the two can be quite different. Travelling for work can be “messy and tiring” but getting to “watch the sunrise and sunset thousands of feet up in the sky and get paid for it is something I will never be able to explain or express my gratitude (for)”.

Gratitude is another important message for Tippett, who posted one note stating “less attitude and more gratitude”. 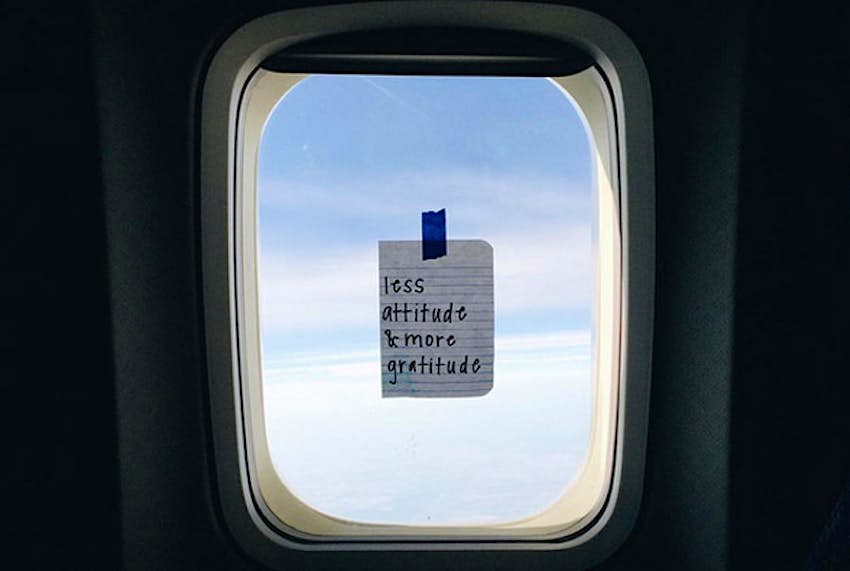 With the series picking up steam, Tippett hopes she can make a photo book of the images and share the idea further. But for now she says that words from the window seat is her "little way to spread some light in a world that needs it so, so much".

10 min read • Published about 9 hours ago

9 min read • Published about 9 hours ago