As if Los Angeles didn’t have enough to attract visitors already … it is now home to one of the world’s most advanced virtual reality centers. The new IMAX VR has just opened on Fairfax Avenue in the city and lets travelers suit up as Luke Skywalker from Star Wars, explore an abandoned Paris as a soaring eagle, or lace up their virtual gloves for a boxing match.

Visitors can choose from fourteen different pods, which let them step into a virtual world “more realistic than anything [they’ve] ever imagined”. The IMAX experience uses the most advanced VR headsets yet created with motion tracking technology that allows people move around as if they were actually entering a different universe.

In Star Wars: Trials on Tatooine viewers brandish a lightsaber and get a piece of the action.

In Star Wars: Trials on Tatooine players get to step into the shoes of Luke Skywalker, wield a lightsaber, and take on Stormtroopers in battle. The John Wick Chronicles is designed for players over the age of 17 and lets them fight their way through the Continental Hotel just like Keanu Reeves did in the movie version.  In Eagle Flight, you can take to the skies as an eagle in a post-apocalyptic Paris and soar high above the abandoned city.

Those with a head for heights might want to take part in The Walk, a virtual reality recreation of the most famous high-wire act in history. It allows players follow in the footsteps of Philippe Petit on his iconic walk between the Twin Towers of the World Trade Center in 1974.

In "The Walk" viewers step into the shoes of Philippe Petit as he attempts to walk a cable between the towers of the World Trade Center in 1974. Image by TriStar Pictures

The LA virtual reality center is the first of several centers that IMAX are planning in New York, California, China, and the UK. For those on the other side of the Atlantic looking for a taste of the action – movie theatre chain MK2 is letting customers try out virtual reality in one of their Paris cinemas. 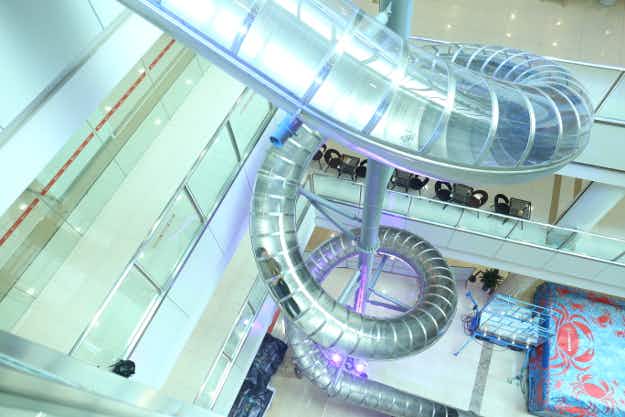 Shoppers can now zoom down a four-storey slide at a…

This photographer let Gandalf be his guide through the gorgeous…