Police in Iceland stopped two foreign drivers last week for driving erratically, only to discover that they were distracted by the Northern Lights.

In the first incident, a car on the way to Keflavík airport was seen swerving between lanes, reports Iceland Magazine. The police suspected the driver was drunk, but when questioned, the sober driver explained that he had been unable to take his eyes off the Northern Lights.

In the second, a vehicle driving away from the airport - which is just under an hour’s drive from Reykjavik  - veered back and forth before taking an abrupt turn into the town of Njarðvík. Inside the car was a group of visitors who were also sober, but had again been distracted by the bright lights of the Aurora Borealis.

The Aurora Borealis, or Northern Lights, is a natural light display caused when solar flares are drawn towards the earth by magnetism. A kaleidoscope of colour can result, with shimmering, dancing shades of green, white, violet or red drawn across the sky.

The Northern Lights are most clearly visible at northern latitudes in winter, although they can be seen as far south as England. They may be visible on clear nights in Iceland between October and April, with December to February the peak of the season.

Winter tourism in Iceland has been increasing in recent years, with the chance to see the dramatic phenomenon part of the appeal for many visitors. Most sights are also quieter in winter, and while the days are short, the wintry landscapes can be stunningly beautiful. Various tours to the country put the Northern Lights at their heart although, because sightings are so dependent on the weather, the best advice for tourists hoping to catch a glimpse is simply to stay for longer.

Both the lucky drivers were advised to keep their eyes on the road, or find a safe spot to park their car so they could continue to gaze skywards. 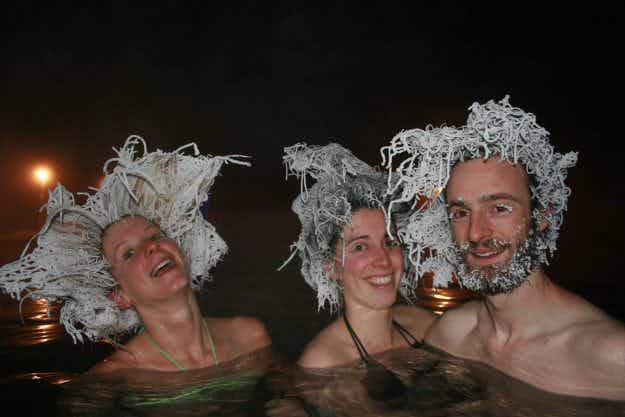 Canada is holding a competition for the best frozen hair…