1916 Irish Uprising: five tours to give a potted history of the 100-year-old rebellion

With Ireland celebrating the centenary of the 1916 Easter Rising this year, there is no better time to go on a specially curated tour in capital city Dublin to obtain a potted history of one of the country’s most significant historical events. The Rising was launched by Irish republicans to end British rule and establish an independent Irish Republic, and these tours colorfully capture a flavour of the dramatic events, significant people and struggle and strife that shaped Ireland’s history. Here are five popular tours, but a word of warning - reserve your place early as they can get quickly booked out at weekends.

The tour visits key locations of 1916 Dublin in a specially converted 1916 themed truck.

This is a unique, mobile, open-air historical tour, where you get to see parts of Dublin that played a part in the Irish revolution including the General Post Office, the Jacobs Factory and Boland's Mill, all occupied by the rebels, while travelling in period-style army trucks with uniformed guides. The trucks, which children will love, contain screens showing period footage, and the non-political tour aims to tell the story through the eyes of combatants on both the Irish and English sides. It also focuses on ordinary citizens, and describes how the conflict affected workers and businesses in Dublin.
Duration: One hour approximately.
Cost: €20 per adult and €12 per child. Family tickets available for €60.
www.1916tour.ie

Many of the freedom-fighters who participated in Ireland’s fight for independence were laid to rest within the walls of Glasnevin Cemetery. A mere 3km from the city centre, Glasnevin Cemetery Museum is holding fascinating and highly moving daily guided tours, which visit the graves of Éamon de Valera, Michael Collins, Harry Boland, Countess Markievicz and many more. The afternoon tours also include a re-enactment of one of the executed leaders Patrick Pearse's famous graveside oration at the funeral of Jeremiah O'Donovan Rossa,  and a recollection of the surrender given by Nurse Elizabeth O'Farrell. The ticket also includes a visit to the exhibitions in Glasnevin Cemetery Museum.

Duration: One hour and a half approximately.
Cost: €12 per adult and €8 per child/senior/student. Family tickets €25 (10% discount on all tickets if booked online).
www.glasnevintrust.ie

1916 rebellion was centered very much in Dublin. Image by Reg Gordon

This is Dublin’s original walking tour, and was founded in 1996 by Dublin historian Lorcan Collins, author of the books, The Easter Rising and James Connolly. The tour starts with a brief overview of Ireland’s history and the complexities of the revolutionary period, and moves onward to visit the places around the city centre that were significant in The Rising, including the GPO, Trinity College, O’Connell Street, Moore Street and beyond. With plenty of stops, interesting facts and great stories to provide a fascinating historical perspective on Ireland’s fight to end British rule in Ireland, the highly entertaining Collins and his guides are passionate about Irish history. Expect a lot of laughter and fun, while retaining the serious essence of what the Rising was all about.

Duration: Two hours approximately, at an easygoing pace.
Cost: €13 per adult and €9 per child. Children under 8 go free.

1916 Rise of the Rebels Bus Tour Image by Paul Sherwood

Two professional actors act as your guides on this highly-original tour through the landmark locations in Ireland’s rise for independence. Using the testimonies of the battle survivors, they bring to life the struggles that brought about this call to fight for Ireland’s freedom. Once on board a custom-designed bus fitted out as an under-siege base of revolutionary action, you can see and walk through some key battle locations, hear the testimony of people involved, and see the places whose involvement has, until now, been hidden within the official histories told of this crucial week in Ireland’s history.

Dublin’s Kilmainham Gaol held some of the most famous political and military leaders in Irish history, including the 1916 Rising leaders and Éamon de Valera. It housed hundreds of men and women arrested for their part in the Rising, and between 3 and 12 May 1916, 14 men were executed by firing squad there, including Patrick Pearse and James Connolly. The tour gives visitors a dramatic and realistic insight into what is was like to have been confined in jail up to 1924 when it closed. Warning - bring tissues, as it's very moving and evocative.

The song Grace was written about Joseph Plunkett, one of the executed leaders.   Hours before the death sentence was carried out, he married his girlfriend Grace Gifford in the chapel of Kilmainham Gaol. This version of the song was recorded for Centenary, a one-off cultural celebration and the culmination of events to mark the 100th anniversary of The Rising. It is sung by cousins Danny O’Reilly, Roisin Ó and Aoife Scott. 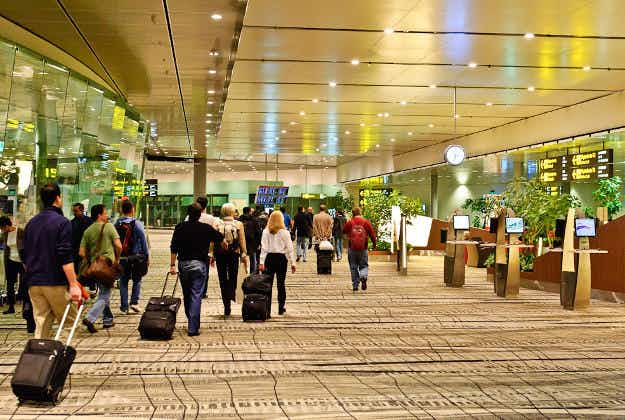 Singapore's Changi Airport due to get even bigger as passenger…