Down over 12,000 gallons of hot chocolate on the sweet 15K run in California this weekend

The next best thing to winning a golden ticket for Willy Wonka’s Chocolate Factory? The Hot Chocolate 15k/5k, taking place in San Diego on 26 March.

Leaving the city’s Petco Park baseball stadium in the morning, runners will sprint around the Downtown area and into Balboa Park (15k runners), enjoying sweet stations on the route filled with various goodies, from marshmallows to chocolate chips and M&Ms.

If you’ve managed to keep all the sweets down by the finishing line you can tuck right into your trophy – a mug of hot chocolate, wafer cookies, chocolate fondue, bananas, marshmallows, chocolate squares, pretzels and rice crispy treats.

Ooh look what came in the mail! I'm dropping from the 15k to the 5k but still super excited to run (and then brunch) with friends! #hotchocolate15k #runhapy #fitpregnancy #instarunners #philly

The idea for the race came about when hot chocolate and running fanatic Steve Ginsburg combined two of his favorite things. “I spend more money at Starbucks than anyone else in America that doesn't drink a drop of coffee,” he said. "Who doesn't love chocolate? I am a firm believer in the science that 1% chocolate milk is the perfect recovery drink.”

Everyone who completes the 15k race gets a Hot Chocolate San Diego medal in the shape of a chocolate bar – but don’t try and eat it, it’s made from solid metal alloy. Instead, you can show it off at the chocolate post-race party with live music and a bunch of bouncy houses – just to really test if your kids are chocolate heavy-weights.

During the entire Hot Chocolate 15k/5k season organisers prepare a whopping 12,600 gallons of hot chocolate, and 28.75 tonnes of fondue. They’ll use 4000 pounds of melted chocolate per race, which takes roughly eight hours to liquefy. Ginsburg takes a particular pride in his cocoa. “We have it made specially for us,” he said. “I’m a health nut and as such I won't serve anybody anything that I wouldn't eat. Both the hot chocolate and chocolate fondue are pure dark chocolate with no preservatives. It costs me a great deal more, but let's face it, it's the name of the race, it better be the best chocolate you ever tasted!”

What's the secret to the best hot chocolate? USE REAL CHOCOLATE! 🍫🙋🏻New recipe for the best Mexican hot chocolate ever is up on the blog @melaniecooks (profile link)❤ You need this hot chocolate in your life right now! ☕️

Seasoned runners can keep track of their time with the event’s disposable chip timing system, and if you fancy turning things up a notch you can enter the Elite Corral – the men and women with the top three race times win cash prizes.

The Hot Chocolate 15k/5k takes place in more than 15 cities around the United States in 2017, including Philadelphia, Nashville, Las Vegas, and Chicago – with a special tenth anniversary celebration this year. Visit www.hotchocolate15k.com for more information.

Dont miss this - a giant ball pool is open… 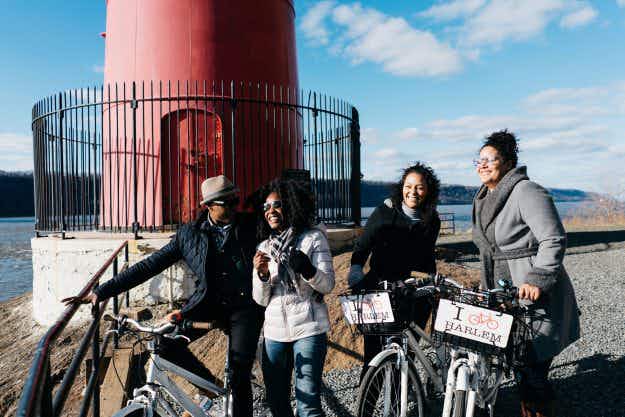 Try a freestyle rap workshop or bike tour with Harlem’s…