Dozens of shipwrecks and over 100 artefacts have been found in a major survey of the sea off Scotland. The three-year Project Samphire has uncovered WWII flying boats, an iron war yacht, grave slabs, cannon and ferries, says the BBC.

One of the most high-profile finds was a group of previously unreported flying boats from WWII, which were found in the Firth of Lorn in Argyll. The wrecks of the Yemassee, an American cargo ship lost in Skye's Loch Bharcasaig in 1859, and the Cathcarpark, a steamship carrying salt that ran aground in April 1912 – on the same day as the Titanic – were also uncovered.

Several ships were uncovered in Loch Torridon, including the Hersilia, an armed iron naval yacht that sank in 1916, and the Sheila, a ferry that went down in 1927. The boat that went to recover the ferry also sunk. Other findings from the project include a number of ancient grave slabs which show the medieval ships known as Highland galleys. The survey scoured the coast from Cape Wrath  in the north to the Solway Firth in the south. Archaeologists from Scotland and Australia were assisted by local fishermen, scallop divers, beachcombers and divers.

Paul Bancks, of the Crown Estate, which funded the project, said local knowledge was vital to its success. "What has made the Samphire project special,” he told the BBC, “is the way it has harnessed local knowledge to inform how and where investigations took place. It's been fascinating to see the discoveries the marine archaeologists have uncovered, with many finds reminding us that leisure, trade, and even conflict have all been played out on the waters around Scotland for many hundreds of years.”

Watch the incredible moment a 'live mural' photoshoot ended in… 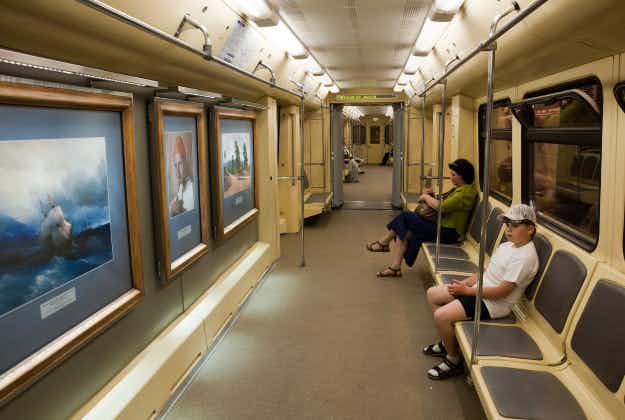 Russian ‘Metromarathoners’ to visit every station of Moscow metro in…